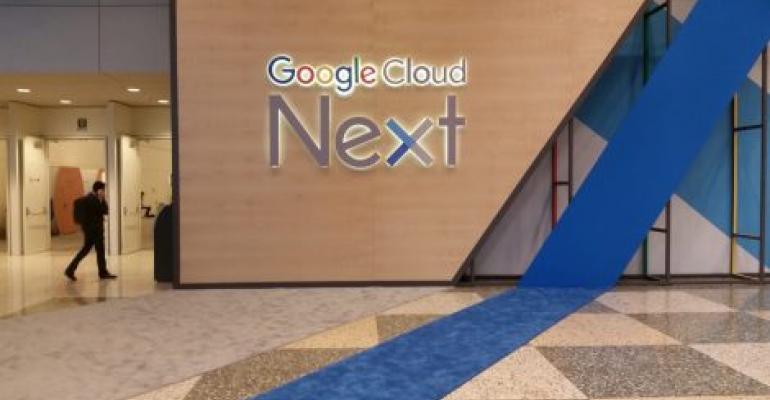 Can Google Lure More Enterprises Inside Its Data Centers?

The company is doing all the right things to grow its enterprise cloud business, but there’s still a long way to go.

Google spent the better part of the week making the case to businesses that they’re better off not only moving out of their own data centers and into its cloud, but that its cloud was a better option than the clouds its biggest rivals in the market, Amazon and Microsoft, have built.

At a conference in San Francisco, the Alphabet subsidiary announced a myriad of new products across the public cloud services spectrum (from cloud infrastructure to office tools), rolled out a major cost cut for clients who commit to long-term cloud use, paraded several recently sold enterprise customers (including some heavyweights, such as Verizon and HSBC), cranked up its efforts to take its cloud services to market via partners, and touted the might of its global data center network.

Among all the players in the enterprise cloud space, Google is a very special case. While it probably has the world’s biggest and most powerful cloud, it didn’t build it to provide the kinds of services it now really wants to grow. The infrastructure was built to support its core business, which is essentially serving ads to users of its big free consumer services, such as search and YouTube.

It’s certainly easier to adopt an existing network of data centers for enterprise cloud than to build one from scratch, and the company has been doing that to the extent possible, but it doesn’t have data center footprint in all the locations a hyper-scale cloud provider needs to truly compete with the likes of Amazon Web Services and Microsoft Azure. The result is the company with the largest cloud in the world has a much smaller cloud than its two top competitors do to provide enterprise cloud services, although it’s pouring a lot of money to catch up on that front – about $10 billion a year – and adding new locations quickly.

Additionally, because Google has largely been built around its online advertising business, it also lags behind the other heavyweights in the ability to sell to enterprises and assist them in deploying whatever it is they need deploying in its cloud. Microsoft has been in the enterprise IT space ever since the creation of enterprise IT, while a myriad of managed service providers and consultants have sprung up over the years to help companies use AWS. Google has been making progress there too, and the announcements of partner program expansion this week were its biggest step in that direction yet.

Another obvious thing that makes Google a special case is its unique and forward-looking approach to technology. It pioneered the hyper-scale data center design, from cooling and power infrastructure to servers and network switches. The company has been collaborating with Intel to customize every generation of Intel’s server processors to fit its needs for more than a decade, and was involved with the development of server chips built on Intel’s latest Skylake architecture from the start. It has already upgraded several of its cloud data centers with the new chips, and it will be a while before any other cloud provider or server vendor will be able to get their hands on the part.

Google has also been a major driving force in the rise of Deep Learning, a type of Artificial Intelligence, and has been ahead of others in terms of using Deep Learning in production for its consumer services. Now, Deep Learning is its core differentiation message in the enterprise cloud space. It wants companies to consume its Deep Learning technologies via APIs, as cloud services.