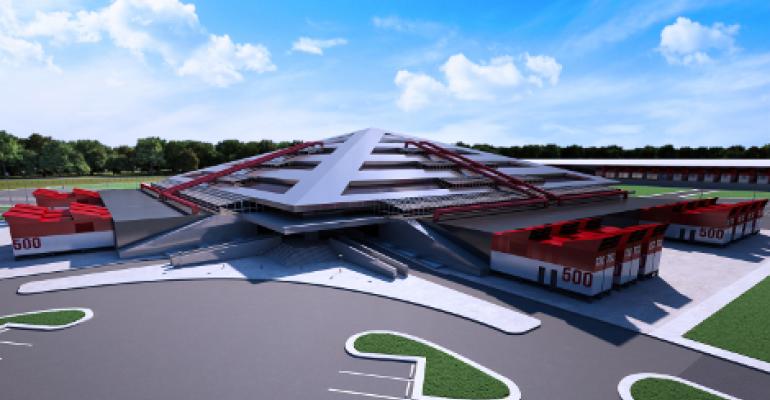 Switch, the data center provider known for its massive SuperNAP data center campus in Las Vegas, announced Thursday the launch of the first data center on its new campus in Michigan, a converted pyramid-shaped structure that used to be a corporate office building.

Slick and bold data center design has been a staple of the Switch brand, and the facility outside of Grand Rapids is no different. Besides the fact that it’s probably the only pyramid in the world whose sole purpose is to house internet infrastructure, bold red pipes outside contrast with the pyramid’s grey walls, giving it a futuristic, sci-fi look, while dramatic lighting inside makes it feel like a cross between a modern corporate lobby and a night club.

Those features alone distinguish it from other data centers around the world, most of which (with some exceptions) are plain, nondescript concrete boxes from the outside and purely utilitarian infrastructure facilities on the inside, designed to perform their core function and absolutely nothing else.

But the Switch pyramid takes things even further. Suspended from the ceiling in the center of the building, in its main lobby, is a massive Focault pendulum, giving visitors a chance to contemplate Earth’s relentless rotation as they wait for their appointments:

This is only the first building on what Switch has dubbed the Pyramid Campus. It is designed to provide 225,000 square feet of data center space, while the full-campus design promises up to 1.8 million square feet of space and up to 320MW of power.

This is the second Switch data center location to open this year. The company, whose customers include eBay, Amazon Web Services, Fox, Hulu, and Boeing, among many others, recently launched the first data center on its new Reno, Nevada, campus, which was also its first data center outside of Las Vegas. It is also building data centers in Italy and Thailand as joint ventures.

The company said at the time it was weighing multiple location options. Following the state’s adoption of the new tax breaks, Switch CEO, Rob Roy, told Data Center Knowledge in an interview that the company would not have chosen Michigan, had the state not enacted the incentive bill.

"In the legislature, we took very seriously our commitment to creating public policy that would enable and encourage new companies like Switch to make Michigan the most competitive state in the region for economic development,” Michigan State Senate Majority Leader Arlan Meekhof (R-Grand Haven) said in a statement. “Having the technology backbone of the internet right here in Michigan up and running ahead of schedule definitely delivers on the vision of that policy."