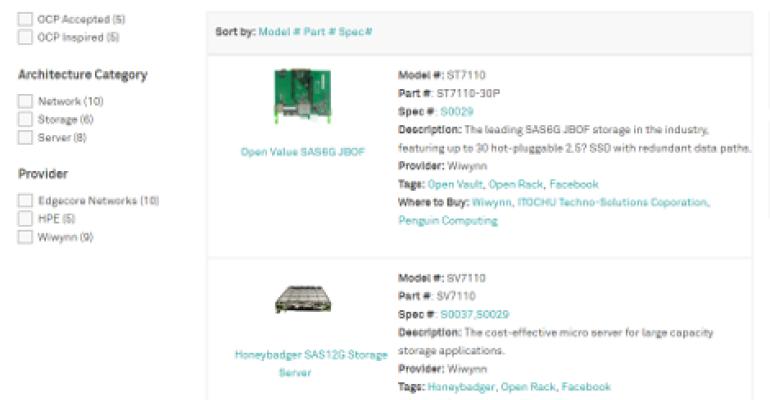 Open Compute Project, the open source data center and hardware design community Facebook founded six years ago, has launched an online marketplace where companies can shop for official OCP-accepted hardware as well as hardware “inspired” by specs and designs open sourced through the project.

While operators of massive, hyper-scale data centers, the likes of Facebook and Microsoft, have used OCP to source hardware that’s custom designed for their workloads and to drive down the cost of their data center hardware by having vendors compete to supply essentially the same products, OCP gear has not been easy to source for smaller data center operators who do not buy at the same volumes.

The OCP Marketplace appears to be an answer to that problem, which has been frequently cited as one of the biggest impediments to wide adoption of OCP hardware by enterprises. Long order delivery times have been another major barrier.

OCP chairman, Jason Taylor, announced the OCP Marketplace at the organization’s annual US summit in Santa Clara, California, Wednesday. The marketplace currently lists 70 products that are ready to purchase from the vendors specified on the site, he said.

The range of vendors listed is rather limited at the moment: Hewlett Packard Enterprise, the Taiwanese hardware manufacturer Wiwynn, the network equipment maker Edgecore Networks, also based in Taiwan, US supplier Penguin Computing, and the Japanese systems integrator ITOCHU Techno-Solutions Corp.

The only OCP-accepted products listed now are five data center switches by EdgeCore. The supplier also lists three other switches, based on the 100GbE Wedge 100 switch designed by Facebook.

HPE lists five of its CloudLine servers, which are OCP-inspired. The line represents the company’s off-the-shelf play in commodity hardware for hyper-scale data centers.

There are also servers and storage systems by Wiwynn and HPE.