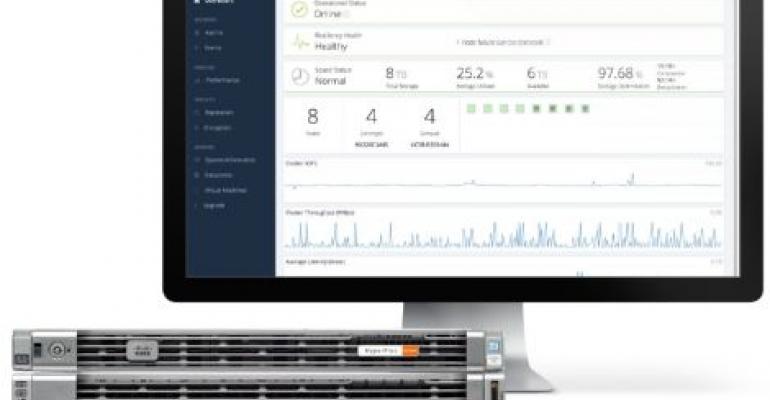 One thing hyperconverged infrastructure architectures clearly are not doing is converging.

One thing hyperconverged infrastructure architectures clearly are not doing is converging.  As Dell’s partner Nutanix adds more capabilities around its unique Acropolis hypervisor-based platform, and SimpliVity begins its transition into an HPE product line, Cisco on Tuesday announced it is coupling a stand-alone distributed file system with its own 40Gbps network fabric, for HyperFlex 2.0.

“With the HX Data Platform, we have basically a built-from-scratch file system, built from the ground up for hyperconvergence,” Todd Brannon, Cisco’s director of UCS product marketing, told Data Center Knowledge in an interview.  “It is inherently a distributed file system.  We distribute data across the whole cluster, right from the get-go.  That’s totally different from the other approaches in the industry today.”

Who Did the Scratching?

HX has that “built-from-scratch” file system by virtue of Cisco’s ongoing partnership with Springpath, which developed its own storage virtualization software a few years ago with the notion of enabling hyperconvergence not just for VMware virtual machines, but also for OpenStack and Docker infrastructure.

See also: What Cisco's New Hyperconverged Infrastructure Is and Isn't Good At

That said, Brannon clarified that HyperFlex 2.0 (along with the forthcoming 2.5 release, just weeks away) is not a storage virtualization platform.

“We saw a lot of the first-generation [hyperconverged infrastructure] systems using open source file systems — EXT4 out of Linux,” he explained.  “That traces its roots all the way into the ‘70s, with UNIX, never intended as a distributed file system.  They basically took that on a per-node basis and built their software on top of that, essentially on a shaky foundation.”

With EXT4, Brannon was referring to one of the Linux-oriented root file systems behind HDFS, the distributed file system of Hadoop and one of the first such systems to be applied to the data lake model of storage.  Data lakes have typically been enabled using software-defined storage and storage virtualization platforms.

But because both software-defined storage and hyperconverged infrastructure utilize software to pool resources together into massive, single units, some analysts have chosen to analyze both classes in the same breath.  And some vendors, including Hitachi, are marketing both technologies in the same platform.

Brannon took care to distinguish the two classes from one another.  He described HyperFlex 2.0 as a 2U appliance, clustered in groups of three minimum and eight maximum, with greater scalability still in the works.  As of last month, HyperFlex began supporting Cisco’s UCS 6300 fabric with 40-gigabit interconnections (earlier versions used 10 gigabit), and that support is now being officially baked into version 2.0.

By contrast, he noted the HX Data Platform does not virtualize customers’ existing storage resources.

“We believe that, if you’re going to build a distributed system,” Brannon continued, “either for a hyperconverged virtual machine farm or a data lake scenario, you need to have a file system that’s built from the outset for distributed storage.  It’s essential.”

See also: Incumbents are Nervous about Hyperconverged Infrastructure, and They Should Be

While Springpath was originally designed around VMware’s ESXi hypervisor, a Cisco spokesperson confirmed, “the HX Data Platform. . . is designed to support a wide variety of platforms and does not rely on any hypervisor.  Cisco HyperFlex provides native storage services such as instant, space-efficient clones and snapshots, bypassing the hypervisor’s data management capabilities.”

Cisco launched version 1.0 of HyperFlex around this time last year, pairing its existing Unified Computing System with the Springpath platform, which was licensed to Cisco under an OEM agreement.  Springpath’s engineers hailed from VMware, including founder and CTO Mallik Mahalingam, among whose many patents is the basis for the VXLAN network overlay, finally awarded just last year.

With this pairing, Cisco appeared to have struck upon the opportunity to provide not only hyperconverged infrastructure but an integration platform for a customers' existing non-hyperconverged systems.

Indeed, in a March 2015 presentation just after Springpath emerged from stealth, CTO Mahalingam told analysts that he had put together a demonstration cluster comprised of four nodes, all of which had OpenStack, three of which used the KVM hypervisor, and one of which used Docker containers.  In a containerized environment, he noted, Springpath’s controller software appears as just another container.

That demo cluster was capable, he said, of exposing its entire data store to a separate cluster running on vSphere ESXi 5.5.0.  Some analysts in attendance laughed at the notion of “vSphere on Docker,” until one of them pointed out that the converged data element exposed by the four Springpath nodes easily undercut the price of running VSAN for consumption by 20 or so compute nodes.

The implied acknowledgment there was that Springpath was looking like a fairly effective storage virtualization platform.

Two years later, its technology is the foundation of a hyperconverged infrastructure platform whose licensee would rather you focused on the efficiency aspect.

“The reason you need to have a solid file system for hyperconvergence is because you are creating that data store for the VMs and the environment,” explained Brannon.  “In a data lake scenario, you want to have all of your client VMs see very consistent response times from that data pool.”

He cited results of a test commissioned by Cisco, conducted by Enterprise Strategy Group’s laboratories, showing input/output operations per second (IOPS) for all-flash storage apparently evening out at around 600 as the number of VMs managed by the cluster scaled from one to 140.

“ESG Lab validated that Cisco HyperFlex hybrid and all-flash systems delivered higher, more consistent performance than other similarly configured HCI solutions using simulated OLTP and SQL workloads,” the report concluded.  “For hybrid clusters, HyperFlex not only consistently outpaced competitors in terms of IOPS and latency, it supported more than twice the number of VMs than both software-based and engineered proprietary systems while maintaining high performance.”