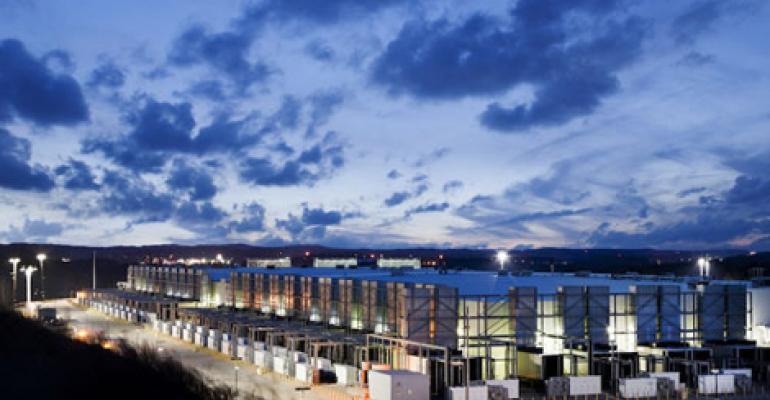 Capex up 10 percent year over year, but even bigger spike expected this year

Google’s capital expenditures were up in 2016, reflecting more investment in data center construction than the year before, while 2017 is poised to see another spike in infrastructure spend.

The Aphabet subsidiary’s 2016 capex was about $10.9 billion, compared to $9.9 billion in 2015 – a 10 percent increase. Not all of Google’s capital spend goes to data centers, but the bulk of it does. On the company’s fourth-quarter earnings call last week, the company’s CFO Ruth Porat said its capital expenditures during the quarter reflected “investments in production equipment, facilities, and data center construction.”

The spike in capital spending is also in line with Google’s announcement last March that it would ramp up investment in data centers to support its enterprise cloud services, a business whose growth has been a top priority for the company as it races to catch up with cloud leaders Amazon and Microsoft.

See also: Who Leased the Most Data Center Space in 2016

Google’s share of the Infrastructure-as-a-Service market was 2.5 percent in 2015, according to Structure Research, while Amazon Web Services commanded 70.1 percent of the market; Microsoft Azure’s share was 10.8 percent of what was then an $11 billion market. Google was behind Alibaba, IBM, and Rackspace in terms of IaaS market share.

While Google already operates a huge global network of massive-scale data centers, not all of those facilities support its cloud services. The company said in March it would add 10 new cloud data center locations by the end of 2017. It launched two in 2016 – Tokyo and The Dalles, Oregon – and said it will launch the other eight this year, which means its 2017 data center spend will likely outpace 2016.

New regions due to come online this year are:

Google said it will announce additional regions throughout 2017.

In addition to building data centers for its cloud services, Google is also continuously expanding data center capacity to support its other businesses. Besides the two cloud regions launched last year, the company also brought online a new data center in Dublin, Ireland.

While the increase in capex between 2015 and 2016 was substantial, it was not the biggest spike the company has reported in recent years. There was a much bigger increase between 2013 and 2014 (from $7.4 billion to $11 billion, a 51 percent increase), which the company attributed to expenditures related to production equipment, data centers, and real estate purchases. 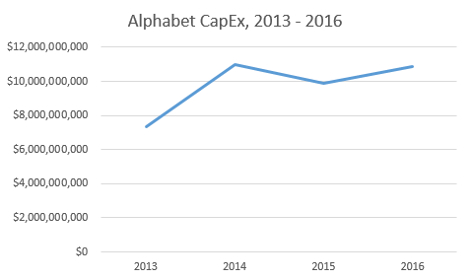