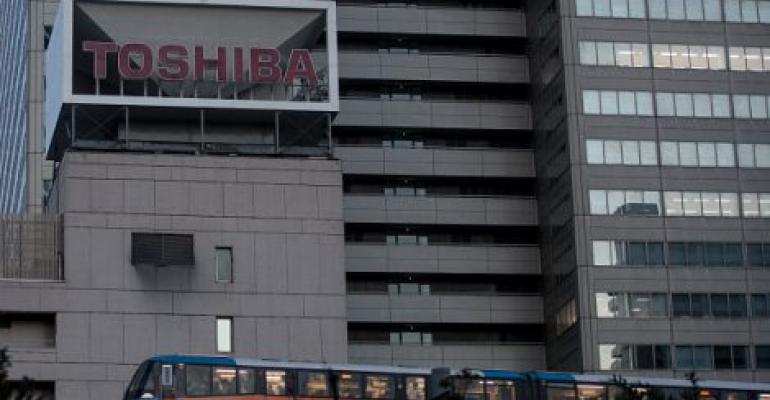 Toshiba Asset Sales After Chips Spinoff Will Cut to the Bone

Conglomerate has 600-plus different businesses, but raising cash via firesale won't be simple

Pavel Alpeyev (Bloomberg) -- Toshiba Corp. is looking to sell more assets to repair a balance sheet facing multibillion-dollar writedowns. The conglomerate happens to have more than 600 different businesses, but raising cash from the firesale will be far from simple.

While Toshiba’s two biggest enterprises are nuclear reactors and semiconductors, the Tokyo-based company also has its hands in a wide range of endeavors, including elevators, a general hospital, software services and light bulbs. It even had a lettuce-growing factory. Making matters worse, a round of asset sales following Toshiba’s 2015 accounting scandal eliminated many of the easy choices.

Satoshi Tsunakawa, Toshiba’s president, said the company is looking at selling shareholdings, real estate and other assets in order to come up with capital. “We will keep considering all options as needed and promptly, and take all necessary steps,” he said at a briefing in Tokyo Friday.

Toshiba is set to book a writedown of much as 700 billion yen ($6 billion) at its nuclear unit, and needs money in a hurry to secure the support of lenders. The company has already indicated that it’s willing to part with 20 percent of its computer-chip unit. Beyond that, there aren’t a lot of businesses that can be easily carved out. The nuclear unit is too much of a mess, and there are no obvious buyers for the smaller entities. All of this raises questions about what will be left of the company after its latest rout.

“There is an unavoidable question of where growth will come from after you strip Toshiba bare,” said  Masahiko Ishino, an analyst at Tokai Tokyo Securities.

While Toshiba announced the plan on Friday to separate the chip business by March 31 and raise capital, it didn’t offer any target amounts or specifics. Tsunakawa said more details would be given at an earnings briefing on Feb. 14. On Monday, Toshiba shares fell as much as 5.9 percent in early trading in Tokyo.

The asset sale will only begin to cover the losses from its nuclear operations. Deutsche Bank AG expects that sale to bring in only 200 billion yen, while many of the other assets are in closely held ventures or minority stakes that take time to attract buyers.

“The value of the chips business will be determined in the bidding process,” Yasuo Naruke, Toshiba’s senior executive vice president, said at the briefing.

Then the next likely target is Toshiba Elevator & Building Systems Corp., according to Macquarie and Morningstar Investment Services. The maker of escalators and lifts, including the world’s fastest operating in the Taipei 101 tower, has been part of Toshiba group for 50 years. The unit’s self-contained manufacturing and maintenance operations make it a relatively easier candidate for an asset sale, according to  Damian Thong, an analyst at Macquarie Group Ltd.

Toshiba doesn’t disclose earnings from the elevator business, which is part of its building and facilities segment that generated 306 billion yen in revenue in the fiscal first half. It’s part of the larger infrastructure systems and solutions division that also includes sewage, locomotives and air-conditioning systems.

“Elevators and escalators are a profitable business, but there is no visibility on the assets,” Ishino said. “With unlisted entities, you have to go through a due diligence process, which will take time.”

A quicker way to generate cash would be to sell Toshiba’s stakes in publicly traded subsidiaries. Point-of-sale equipment maker Toshiba TEC Corp. is listed, and Toshiba’s 55 percent holding is worth about 100 billion yen. Stakes in chip-equipment manufacturer NuFlare Technology Inc., Toshiba Plant Systems & Services Corp., which specializes in power generation infrastructure, and industrial tool maker Toshiba Machine Co. could add as much as another 150 billion yen.

NuFlare’s expertise in electron-beam masks may be attractive to Tokyo Electron Ltd. and Canon Inc., which has been developing nanoimprint technology, Ishino said. Both companies have also expressed interest in buying a stake in Toshiba’s memory chip business.

Toshiba has also decided to sell Toshiba General Hospital, the Asahi newspaper reported. The 50-year-old facility in central Tokyo has 308 beds and testing services that include two CT and two MRI scanners. Some of the machines were made by Toshiba’s own medical equipment arm, which Canon bought last year for $5.9 billion.

“There is no real reason for Toshiba to hold on to the hospital, so it’s an easy decision to make,” said Kazunori Ito, an analyst at Morningstar. “The question is whether there is a willing buyer.”

What’s left are companies and assets that are more difficult to split off. There is Toshiba Information Systems, which offers chip design and software integration services and has been part of the group since 1968, and Toshiba Lighting & Technology Corp, a light-bulb business that’s more than a century old. TMEIC, a joint venture with Mitsubishi Electric Corp., makes inverters and motors for use in energy and industrial applications.

“The sale is easier if you have a distinct entity, which is often not the case with Toshiba,” Thong said. “Many of these companies depend on the head office for core functions like HR, procurement, accounting. That’s why some of these sales may be tricky.”

Why Chef's Sale to Progress Could Be Good for Open Source
Sep 17, 2020