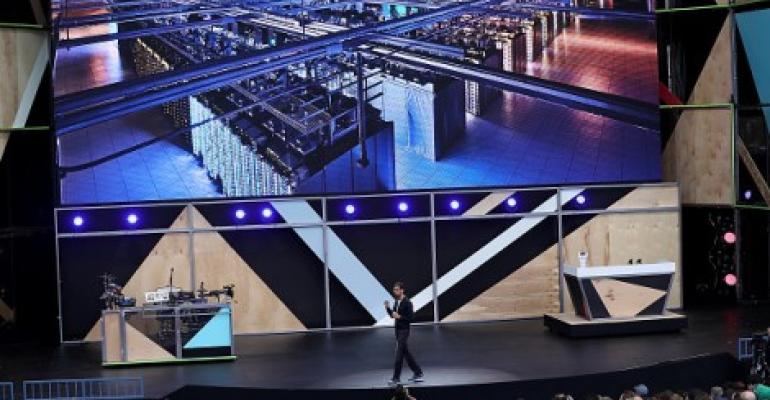 Biggest growth in businesses that deliver computing over internet

By Alistair Barr and Jillian Ward (Bloomberg) -- Alphabet Inc., Microsoft Corp. and Intel Corp., which all posted quarterly results last Thursday, reinforced what’s become a truism in technology: the biggest growth is in businesses that deliver computing over the internet.

Microsoft topped projections on the strength of rising customer sign-ups for its cloud offerings like Azure, which saw revenue almost double. Intel sales rose more than expected, helped by orders for processors that power data-center servers -- the machines at the heart of cloud computing.

While profit at Google parent Alphabet disappointed, the numbers also signaled that heavy spending to catch cloud leaders Amazon.com Inc. and Microsoft is paying off. Google’s Other Revenue line, which includes cloud computing, jumped 62 percent to $3.4 billion in the fourth quarter.

"Our cloud business is on a terrific upswing," Google Chief Executive Officer Sundar Pichai said Thursday during a conference call with analysts. "I definitely think we’re going to have a great year."

What started a decade ago as an easy way for startups to run websites has turned into an increasingly popular way for companies of all sizes to access the software needed to run their operations. Many big technology companies are in a strong position to provide this because they already have huge data centers to support their own web services.

Related: Who Leased the Most Data Center Space in 2016?

More than $1 trillion in IT spending will be directly or indirectly affected by the shift to cloud during the next five years, Gartner estimated in July. "This will make cloud computing one of the most disruptive forces of IT spending since the early days of the digital age," the research firm said at the time.

Stock prices reflect this optimism. Microsoft and Alphabet shares hit a record this week. Microsoft gained 2.2 percent, Google was down about 1 percent and Intel rose 1.5 percent at 1:57 p.m. Friday in New York.

Microsoft Chief Executive Officer Satya Nadella has been working to reposition the company around such internet services. In addition to robust demand for Azure, consumers and corporations continue to purchase Office 365, a cloud-based version of the company’s productivity software that includes Word and Excel. Almost 25 million consumers are now subscribed to Office 365, Microsoft said, and sales increased 47 percent in the fiscal second quarter.

Redmond, Washington-based Microsoft has been spending on data centers and adding products to win new cloud customers. Chief Financial Officer Amy Hood said in July that gross margins, a measure of profitability, for the commercial cloud business would "materially improve" in the current year. That’s because previous years of investment are starting to pay off as those data centers support more customers.

Microsoft has pledged to reach annualized revenue of $20 billion in its corporate cloud business by the fiscal year that ends in June 2018. That metric stood at more than $14 billion at the end of the second quarter.

Intel’s fourth-quarter sales of server chips to cloud service providers jumped 30 percent from a year earlier. Offsetting that, companies and government agencies spent 7 percent less than they had in the same quarter in 2016 on equipping their in-house computer rooms, the company said.

“It’s moving to the public cloud, it’s moving to those areas at a faster rate than I think we expected,” Intel Chief Executive Officer Brian Krzanich said on a conference call.

Amazon reports earnings next week and analysts at RBC Capital Markets expect the company’s AWS cloud business to generate $3.6 billion in fourth-quarter revenue, up 50 percent from a year earlier.

"Microsoft is the plumbing in the cloud," Moerdler said. "Amazon is much bigger, but still Amazon and Microsoft are pulling away from the pack.”