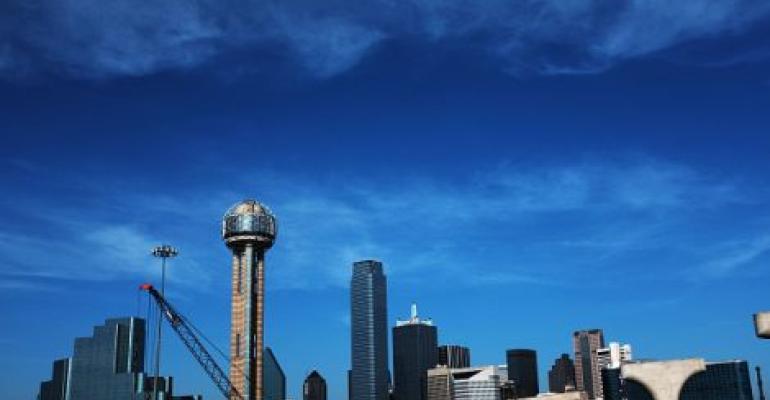 The Dallas skyline is viewed in February 2015. (Photo by Spencer Platt/Getty Images)
Business

JLL: Expect the Dallas Data Center Market to Have a "Chicago Year" in 2017

Metro Chicago wholesale data center operators, in a similar fashion to the Chicago Cubs, celebrated a marvelous championship season in 2016.

But this year, expect a data center leasing pennant to being flying in Dallas-Fort Worth, according to Bo Bond, a Dallas-based managing director for commercial brokerage firm Jones Lang LaSalle.

Bond told Data Center Knowledge he expects the Dallas data center market to be up to bat and swinging for the fences in 2017, "because providers in the Dallas marketplace are scrambling to get deliveries to the market to meet the cloud demand, and there are reports of two or three large hyperscale requirements circling the marketplace."

Here's why Bond is so confident Dallas-Fort Worth will see the same kind of spike in wholesale leasing in 2017 that Chicago enjoyed last year.

Looking back at 2015, Dallas was solidly in second place with 42.3MW of net absorption, just behind the 63MW leased in Northern Virginia's Data Center Alley. The Chicago market at 32.5MW trailed closely behind Seattle/Portland and San Francisco/Silicon Valley markets with 39MW and 38MW, respectively, of net-absorption.

A report just released by JLL highlighted Chicago as having 59MW of net-absorption during 2016, a blockbuster increase of 81.5 percent year-over-year. Conversely, Dallas-Fort Worth clocked in with 36MW, representing a modest 7.8 percent decline.

Meanwhile, Northern Virginia was in a league of its own with 113MW of net absorption. Notably, this 100 percent jump in Virginia demand year-over-year does not include Amazon Web Services' voracious appetite for powered shells in Manassas, Virginia. 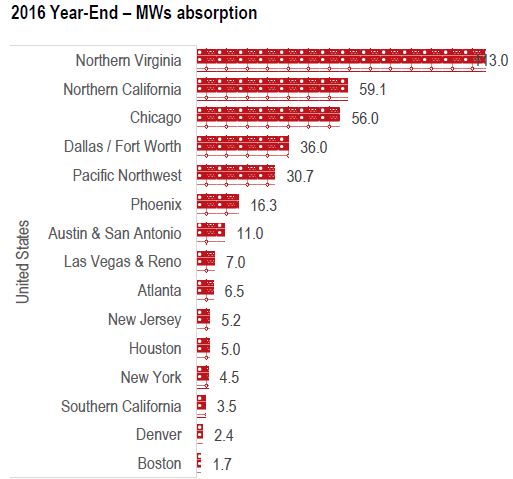 Much of the bump in Chicago wholesale deals has come from hyperscale public cloud customers. JLL research indicates that 86 percent of leasing in Chicago during the past 24 months can be attributed to deployments by Microsoft, Oracle, and other large players.

Meanwhile, it is getting more difficult for developers to find suitable sites to meet the demand in Chicago, a high-barrier-to-entry market where developers often redevelop or demolish industrial buildings with access to power and fiber to meet data center demand.

Why the Dallas Slump?

Many brokers in the data center community are fond of the phrase "supply creates demand."

Urban data center markets like Chicago and Silicon Valley are supply constrained because of a lack of entitled land and utility power, which is not an issue in Dallas-Fort Worth. Bond said he did not foresee the huge spike in demand coming from hyperscale cloud service providers in 2016, and neither did many of his clients.

Read more: Digital Realty Signals the Gloves are Coming Off in 2017

Additionally, lease signings for block and tackle corporate requirements slowed at the end of last year in Dallas. However, Bond sees this bottled up enterprise demand as a tailwind:

"The last quarter of 2016 saw a buzz of Fortune 1000 Enterprises touring spaces for 2017 deployments.  Many of those customers are already placing purchase orders for new equipment to be placed in 'soon to be delivered' facilities. Expect Q1/Q2 [2017] to report solid enterprise colo signings in Dallas."

Dallas - Supply is Back

Notably, in 2017 there will be a steady pipeline of substantial new developments coming online. Here's how Bond delineates the Dallas-Fort Worth wholesale space race:

"Additionally, Skybox will deliver a powered shell in Q1; Stream is moving dirt on a powered shell that should deliver Q3; Ascent is retrofitting the former Capital One-occupied data center for Q3 delivery," Bond said.

Bond laid out some convincing arguments to explain why Dallas should have the leasing success Chicago enjoyed last year.

In light of the JLL report, and Bond's view of Dallas-Fort Worth supply and demand fundamentals, investors should closely watch where those hyperscale deals and Fortune 1000 enterprise deployments land during the first half of 2017.

The entire JLL 2017 Data Center Outlook can be found here.