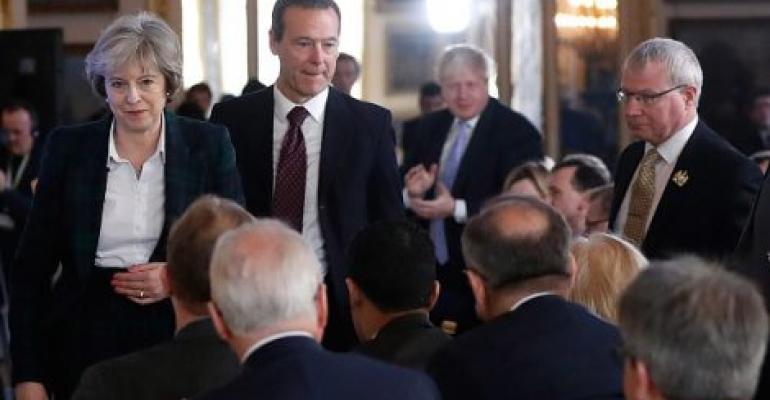 Prime Minister Theresa May, left, is applauded by Foreign Secretary Boris Johnson, center, as she leaves after delivering her keynote speech on Brexit at Lancaster House on January 17, 2017 in London, England. (Photo by Kirsty Wigglesworth &#8211; WPA Pool /Getty Images)
Business

Microsoft will consider halting its data center construction plans in the UK if Brexit results in import tariffs on hardware from China and Eastern Europe, a senior company official said.

In a speech last week, British Prime Minister Theresa May said she would propose that the country exit the European Union's single market as it exits the union itself. If that happens, the UK will have to renegotiate trade deals with countries outside of the EU (to replace EU’s trade deals), which could have huge implications for companies doing business in the UK.

Today, a report emerged that UK officials would start trade negotiations with countries outside of the EU as soon as the formal process for exiting the union kicks off, which is expected to happen by the end of March. Those countries include China, US, New Zealand, and Australia.

One of the most worrisome aspects of those negotiations for Microsoft (and likely other big users of IT equipment) is potential imposition of new import tariffs on data center hardware assembled in Asia and elsewhere around the world. A lot of the gear that goes into Microsoft data centers is produced in China and Eastern Europe; other hyperscale cloud platforms, such as Amazon, Google, and Facebook, also outsource hardware production to countries where it’s cheaper.

Tariffs on hardware imports would substantially increase the cost of doing business for these companies, which every year spend billions of dollars on data center infrastructure.

“We’re really keen to avoid import tariffs on any hardware,” Owen Larter, Microsoft’s UK government affairs manager, said last week in a Microsoft webinar on the implications of Brexit for the technology industry.

“We’re looking to build out our data centers at a pretty strong lick in the UK, because the market is doing very well," he said. "If all of a sudden there are huge [import tariffs] on server racks from China or from Eastern Europe, where a lot of them are actually assembled, that might change our investment decisions and perhaps we build out our data centers across other European countries.”

Trump's Trade Views Have Similar Implications for US

The new US President Donald Trump’s promises of imposing new tariffs on foreign imports carries even bigger implications for hyperscale data center operators. The US continues to be the world’s largest cloud services market and the place where the bulk of their data center capacity is.

Microsoft alone signed leases for more than 125 MW of new data center capacity in North America last year. Those facilities will need to be filled with servers.

Trump’s transition team has floated a proposal to impose import tariffs as high as 10 percent.

While a core Trump campaign issue, making imports more difficult – especially imports from China – is something pro-trade establishment Republicans oppose, so any effort to impose additional tariffs on international trade by the administration will not be an easy win.

Another big issue for Microsoft and other cloud providers is data flows. Today, a uniform set of rules governs cross-border data flows in the EU, meaning data from any EU country can be transferred and stored in any other EU country, because they’re all deemed to have equally adequate safeguards.

Once the UK exits, its security measures may be reassessed as a country and if found subpar, transferring customer data from other countries in Europe to one of the two recently launched Microsoft data centers in the UK will not be as simple as pushing bits across the network, Larter warned.

The UK is the EU’s largest cloud market, expected to double by 2019, he said. “That kind of bright future is probably not going to be possible if we make it a lot harder to transfer data and store data from the EU and into UK data centers.”

Brexit would also mean the UK and the US would have to negotiate a new framework for transferring data between the two countries. Currently, cross-Atlantic data flows are governed by the Privacy Shield agreement between the US and the EU.

Larter pointed out that Trump’s enthusiastic signals of support for business between the US and the UK would suggest a smooth path to a new data-flow agreement, however.

The UK government has strong economic incentives to push for easy and seamless cross-border data flows. Nearly 80 percent of the country’s GDP is services-based; legal, advertising, financial services “are the engine of the UK economy,” Larter said, and they happen to be data-driven by their nature, so Microsoft will be pushing for international “data liberalization” to be at the heart of any future trade arrangements.