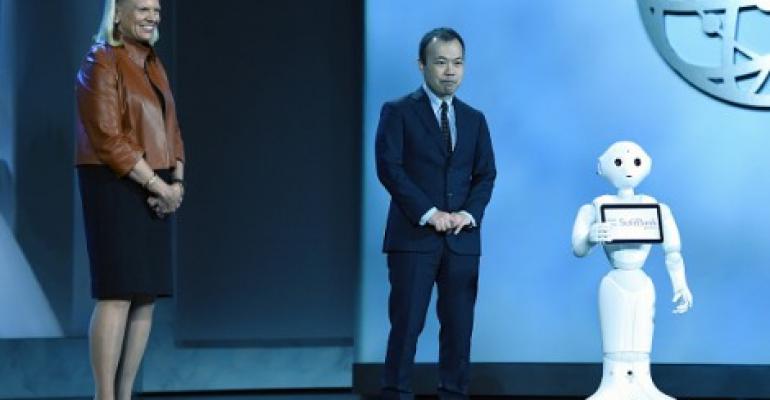 IBM Margins Narrow While It Struggles to End Sales Slide

(Bloomberg) -- IBM fourth-quarter sales declined and margins narrowed, indicating that revenue in cloud computing and artificial intelligence hasn’t yet offset acquisition costs and other expenses to move the company into new businesses.

Revenue was $21.8 billion, slipping for the 19th consecutive quarter. Operating margins shrank year-over-year for the fifth quarter in a row, to 51 percent, International Business Machines Corp. said Thursday in a statement. Investors and analysts view the margin metric as a key indicator of the company’s health.

Chief Financial Officer Martin Schroeter attributed some of the narrower margins to “heavy investment” over the last few years in development, acquisitions and partnerships. IBM paid almost $6 billion to buy 15 companies last year and also boosted its spending on research and development. Currency also had an impact in the fourth quarter, he said on a conference call.

“After ramping investment in 2015 through late 2016, we’ve wrapped on that higher level,” Schroeter said. Within the company’s cognitive solutions segment specifically, “those things that have dragged our margins down are starting to go away.”

IBM’s shares fell as much as 3.3 percent in extended trading after the earnings were announced. The stock closed little changed at $166.81 in New York.

Since taking the helm in 2012, Chief Executive Officer Ginni Rometty has focused the company on products and services in newer technologies, including cloud computing, security, data analytics and artificial intelligence. In the meantime, older businesses such as computer operating systems hardware and software have eroded, and investors are waiting for the declines to be offset by growth in the newer operations. IBM is also trying to sell more products as services, where customers pay as they use the tools instead of agreeing to large multiyear contracts. This approach hasn’t gained enough traction to generate the high margins that IBM and analysts hope for over the long-term.

Some areas have started to show promise. Sales in cognitive solutions, which houses analytics and AI software, increased for the third quarter in a row, and the technology services and cloud platforms segment also recorded year-over-year growth.

Total revenue from strategic imperatives, which includes all of IBM’s newer operations, grew about 12 percent to $9.5 billion in the quarter. For the full year, sales in these areas were $32.8 billion. IBM has set a goal of $40 billion in revenue from these businesses by 2018.

The company reported fourth-quarter profit, adjusting for some items, of $5.01 a share, beating the average analyst projection of $4.88. IBM’s effective tax rate in the quarter was 9.5 percent compared with 12.5 percent a year earlier, which bolstered earnings.

The negative reaction of the stock “could be, in part, related to the quality of the earnings,” said Greg McDowell, an analyst at JMP Securities. “There’s a tax impact, a lower-than-expected tax rate and higher-than-expected IP income. Those were really the two big drivers of the EPS beat.”

The company has sold some less-profitable businesses to focus on growth areas in recent years. It’s also started to license older intellectual property. The company reported income of more than $500 million in the fourth quarter from IP, which includes licensing deals and royalty collections. That was up from $193 million a year earlier.

IP income in 2017 should remain about the same levels as 2016, if not a little less, Schroeter said on the call. IBM expects its pretax profit margin, which deducts all expenses from revenue except for taxes, to increase this year. That doesn’t necessarily mean gross margins will improve, the CFO said.

The way to really improve margins is to cut research and development costs or reduce general expenses by eliminating jobs, said Anurag Rana, an analyst at Bloomberg Intelligence.

“Given that R&D is a big focus for them, my guess is that they’ll have to do more cutting” in other areas, he said.

Industry-Tailored Clouds Give Platforms More Marketplaces They Can Run
Aug 24, 2020