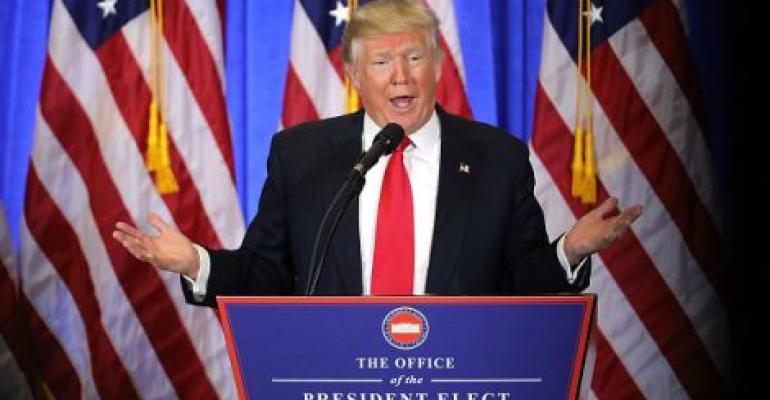 Analysts: Global Political Uncertainty Will Slow IT Spending Growth in 2017

Rise of nationalism, protectionist rhetoric causing many companies to pause IT spending

Analyst firm Gartner has scaled back its 2017 IT spending forecast in light of global political uncertainty that's prompting many tech companies to put a hold on new projects. According to its latest report, Gartner has expects worldwide corporate spending on hardware, software, IT services and telecom to grow by 2.7 percent, down from previous projections of three percent. Similarly, last week Forrester lowered its projection for how IT spending in 2017 from a growth rate of 3.6 percent to 3.2 percent.

"2017 was poised to be a rebound year in IT spending. Some major trends have converged, including cloud, blockchain, digital business and artificial intelligence. Normally, this would have pushed IT spending much higher than 2.7 percent growth," said John-David Lovelock, research vice president at Gartner. "However, some of the political uncertainty in global markets has fostered a wait-and-see approach causing many enterprises to forestall IT investments."

The U.K.'s decision to exit the European Union and the election in the U.S. of Donald Trump have caused tumult in the international markets as the future of trade agreements is thrown into uncertainty, and rising nationalist sentiment throughout Europe indicates a possible widespread abandonment of the sort of economic globalism that has ruled worldwide trade since WWII. Forrester's report cited Trump's "aggressive trade policies" that “would definitely hurt economic growth and thus lead to lower tech spending than in our forecast.” Meanwhile, at the World Economic Forum in Davos on Tuesday, China's president Xi Jinping expressed a willingness to fill the void left by the U.S. if President-elect Trump pulls back from free trade agreements. 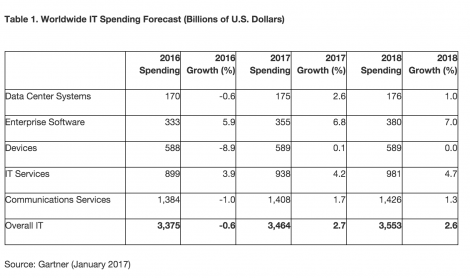 Gartner said it expects a flat demand for PCs, tablets and smartphones this year, which may be discouraging for traditional VARs still reliant upon box sales for the bulk of their revenue. However, as price competition grows more fierce, the firm expects a strong replacement cycle to take effect in 2018. Forrester is more optimistic, projecting a 3 percent year-over-year increase in PC spend this year, and a whopping 10 percent increase in the sales of tablets.

In other mixed news, the Gartner report forecast a 3 percent drop in demand for some types of storage hardware while increasing its global server forecast to 5.6 percent growth this year. Forrester also expects corporations to increase spend on servers in 2017 to $72 billion, which is up 3 percent over last year

The sharp increase in cloud-based software investment will further separate leaders Amazon, Microsoft and Google from the rest of the pack, wrote Lovelock. But as companies rent more cloud storage from the big public providers, they'll invest in fewer servers and less hardware.

"The range of spending growth from the high to low is much larger in 2017 than in past years. Normally, the economic environment causes some level of division, however, in 2017 this is compounded by the increased levels of uncertainty," said Mr. Lovelock. "The result of that uncertainty is a division between individuals and corporations that will spend more — due to opportunities arising — and those that will retract or pause IT spending."

This article originally appeared here, on The VAR Guy.