Panzura, a nine-year-old Silicon Valley company whose technology makes it easier for companies to combine storage in their own data centers with enterprise cloud storage services by the likes of Amazon, Microsoft, and Google, has closed a $32 million funding round led by private-equity investor Matrix Partners.

Cambpell-based Panzura’s current CEO, Patrick Harr, is best known as a co-founder of Nirvanix, a once promising cloud storage startup that went out of business in 2013, four years after he left the company. Panzura, which Harr joined last year, operates in a different market environment, one where he believes it is more likely to succeed than his storage startup was.

This is Panzura’s fifth funding round, bringing its total money raised to $90 million.

The company’s storage controller, installed in the form of physical appliances in customer data centers and as virtual instances in the cloud of the customer’s choice, makes cloud storage appear the same as the customer’s in-house storage network to their applications. Its software also does network-wide deduplication, regardless of the number of locations a file is being used in, real-time file locking (to keep the most current file version consistent across all users), as well as compression and encryption, at rest and in flight. 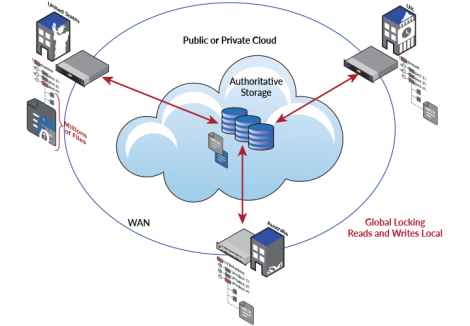 Panzura has hundreds of customers, from mid-size to some of the world’s largest companies, according to Harr. Customers it has named publicly include the US Department of Justice, Electronic Arts, Milwaukee Tool, Fluor, and Chevron, which also participated in the latest funding round.

In addition to Matrix and Chevron, the round was joined by Meritech Capital Partners, Opus Capital, and Western Digital.

In an interview with TechTarget last year, Harr attributed the demise of Nirvanix to timing. He called Panzura a “continuation” of what he started with Nirvanix, which arrived on the market at a time when there were still many security, performance, connectivity, and regulatory concerns with cloud. The industry has moved past those concerns, he said.