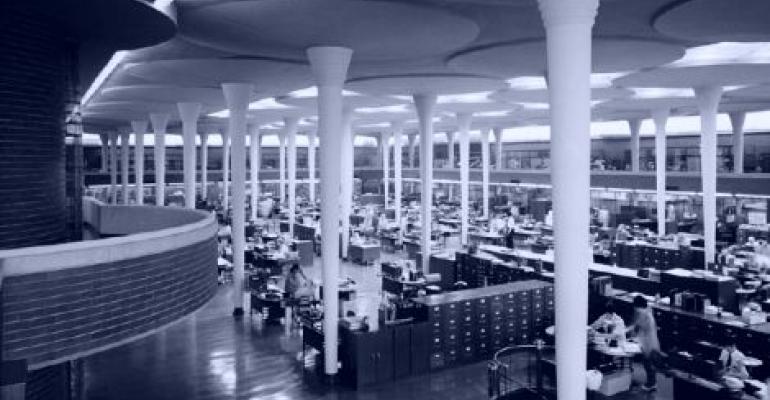 The “Great Workroom” of the Johnson Wax building, as designed by Frank Lloyd Wright, believed to have been taken during the 1930s (Public domain)
Business

Issues for 2017: Has the Enterprise Data Center Stopped Disappearing?

Enterprise facilities in 2016 were either headed for good fortune and prosperity, or doom and extinction, depending upon whom you asked. We talked to some experts who could explain why.

If you believed everything you read, nothing would be correct.  The cloud, we’ve been told, will absorb resources and investment from enterprises, leading to smaller and fewer enterprise data centers.  Indeed, entire businesses will cease to exist as a result of a tremendous force of enterprise absorption, as predicted by former Cisco CEO John Chambers in 2015.

The cloud, we’re told, will rejuvenate enterprises and restore their faith in their ability to own and maintain their own infrastructure.  Indeed, entirely new businesses will bloom and prosper, as predicted by the contributors to the OpenStack Foundation, one of which is Cisco.

So what does the evidence tell us?  Last June, we reported the findings of the latest Uptime Institute survey for 2016.  Fewer respondents said their firms were building new data centers within the previous 12 months — which was fewer than the year before.  This would appear to have disproven a 451 Research report the previous year, which predicted that nine of 10 data center operators planned to build a new facility.

Uptime’s survey results were followed one month later by a Jones Lang LaSalle report, indicating a spike in leases.  The cloud, the commercial real estate firm predicted, would lead to a doubling of the entire data center industry within the next five years.

You’d think there were more contradictory signals from the global data center industry over the last year than in the entire previous US presidential campaign during the last four.

“I definitely think the enterprise data center, if you will, in the classic sense, is gone,” Chris Sharp, CTO and senior VP for service innovation at Digital Realty Trust, said in an interview with Data Center Knowledge.

“The most economical and secure architecture you can possibly pull to market,” Sharp continued, “is this hybrid, multi-cloud strategy. And by ‘multi-cloud,’ I mean hybrid interconnectivity to these services. And that’s next to impossible to achieve in the traditional enterprise data center.”

As regular DCK readers no doubt already know, Digital Realty’s key product this year has been its new Service Exchange, a connectivity-as-a-service offering that brought it within par of Equinix Cloud Exchange.  Clearly, Sharp has an interest in promoting the idea that it makes sense for companies to deploy their IT gear in spaces with greater opportunity to connect with cloud providers using high-speed, high-availability connections.

But his broader point is difficult to dispute:  Connectivity is the actual issue here.  Virtualization would effectively render all cloud servers anywhere on the planet equivalent to one another, regardless of location, were it not for the issue of connectivity.

In most any survey where you give IT personnel a list of factors that comprise their firms’ final decision about where to house their IT assets — on-premise, in colocation facilities, in the public cloud — and ask them to choose the most important deciding factor, cost or price typically tops the list.  But when you examine the forces that end up positioning IT assets where they are today, and that relocate them from place to place, you find these firms are not always following price the way the ancient Egyptians built their empire along the river Nile.

Connectivity is the commodity that data center users and operators are actively chasing.  Like a migratory species adapting to a new environment to survive, data centers will take whatever shape and function they need to adapt to the workloads they’re being given.  So shrinkage or growth may not really be what you think they are.

“The mashup of services that enterprises have to rely on is becoming more and more complex,” Sharp said.  “Customers today have a sense of what their existing requirements are around space and power.  But I ask them, look two years, three years out.  They have a very rough time gauging what they’re going to need.  What they do know is that it’s going to grow, and that it’s going to grow rather large.”

If you extend the definition of “enterprise data center” to be as virtual and as versatile as the applications and services that live-migrate between today’s servers, then those contradictions no longer seem like opposing forces.  Like the familiar metaphor of two people judging an elephant in a darkened room, they become different perspectives of the same picture.  Yes, on-premise facilities may no longer be growing.  No, enterprise investment in data center infrastructure and resources is not shrinking.

So you have to look back at some of these surveys that ask IT personnel about “your data center,” and ask yourself whether all the respondents thought it meant the same thing.

Steven Carlini, senior director for data center global solutions at Schneider Electric, offered this explanation in an interview with DCK:  Data centers, he said, are not homogeneous across the spectrum, and frankly never have been.

Yes, Schneider has an interest in seeing smaller facilities come to fruition, having recently partnered with HPE on the "Micro data center."  But wouldn't you trust someone urging you to bet on a horse if that someone was betting on the same horse?

In Carlini's outer ring, facilities may become more application-centric.  He foresees a possibility that, for instance, the agriculture industry may invest in these trailer-sized complexes, for gathering the Internet of Things data from sensors stationed throughout active fields, measuring soil temperature, moisture, acidity, and other factors in real-time.

“When you run the processing closer to the application,” Carlini pointed out, “you don’t necessarily need to save all of the data.  You only want to save the results of the IoT processing.”

And yes, there’s a self-serving component to that argument; but again, the broader point being made here is difficult to dispute:  Big Data got big because meaningful analytical results take time to process.  Greater connectivity would reduce that interval.  As a result, many applications might not need to store so much of their captured data for the results of their analytics to be just as relevant.

Maybe the enterprise data center ends up looking more like a semi-trailer than the ground floor of a high-rise.  But if it does the job reliably and affordably, who cares?

The middle ring in Carlini’s model is easy to overlook.  He sees Schneider as having a hand in that department as well.  But because this ring involves regional data centers, there’s a major roadblock that the inner and outer rings may not face.

To borrow Arlo Guthrie’s phraseology, ther-r-r-re was a third possibility that no one even counted upon.

“We could drop a pre-fabricated, regional data center, basically off a truck, and have it up and running in a week," Carlini explained.  “But because of all the permitting and regulations, we can’t do that.  And the internet [service provider] giants can’t do that either.  So what’s happening is, a lot of these colocation facilities that were built in urban areas now have these internet giants as their primary tenants.”

Because regional data centers deal in local regions, they get caught up in regional disputes — zoning laws, rights-of-way, energy monopolies.

ISVs are moving their SaaS services and their clouds closer to their customers, and they’re using colo providers to help them get there.  Colo gives ISVs a way around the regional regulatory problem — a shortcut to the connectivity they’re looking for.  If the regulatory environment were to change, in this country and elsewhere, conceivably a new bumper crop of mid-range data center facilities could spring up in industrial parks and central business districts.

And the definition of “enterprise data center” would change yet again.  The thing we forget when we’re sorting out our definitions and our taxonomies from year to year is that circumstances change the way such a sorting process works.  From one milestone year to the next, the context of our industry shifts, and our kaleidoscopic view of the world no longer presents us with the same pattern.

We call it “digital disruption,” but usually that’s just a catch-all phrase for the white noise that results from trying to perceive an evolving world from a non-evolving lens.  As any scientist will tell you, when a subject of investigation appears to be growing in one measurement and shrinking in another, that’s not the Uncertainty Principle.  That’s natural evolution.