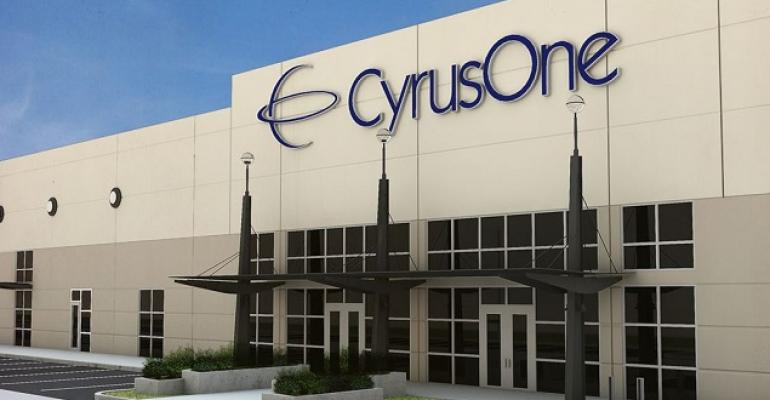 The data center REIT sector has begun to rally for the first time since the November election, once again allowing good news to provide a tailwind for share prices.

It would not have been newsworthy during the first half of this year for Carrollton, Texas-based data center REIT CyrusOne (CONE) to post a 3.6 percent share price gain in a single trading session. It simply would have been chalked up as business as usual.

On Tuesday, it was a welcome respite after many weeks of bearish trading. CyrusOne shares closed Monday at $44.78, and were up as high as $48.78 intraday, prior to closing at $46.56. Prior to the opening bell CyrusOne announced a leasing win in Texas, which appeared to be the reason behind the sharp move higher.

However, good news hasn't been a sufficient catalyst for data center REIT shares for quite some time.

It has been rough sledding for REITs and data centers in particular for the past few months. In fact, as recently as two weeks ago, good news was ignored by investors. On Dec. 1, 2016 shares of CoreSite Realty sold off ~4 percent after announcing a 51 percent dividend increase.

Seriously, that really happened. All REIT asset classes sold off heavily on December 1, on rising rate fears when money flowed out of the entire sector. 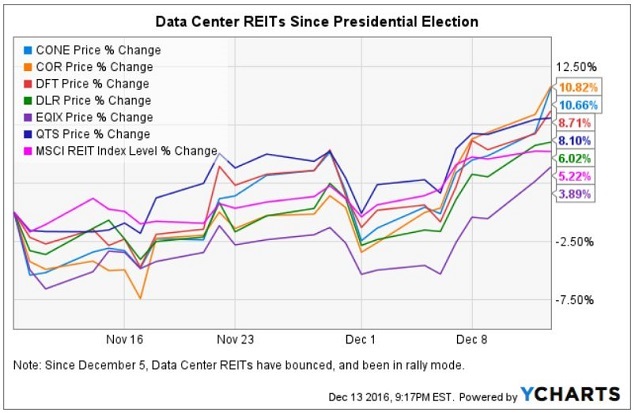 The exceptional good news for CoreSite shareholders was totally ignored. Last week an SEC filing revealed that CoreSite's new CEO, Paul Szurek, bought 7,000 shares on the open market on December 5th at $68.92 per share. As of this writing CoreSite shares are now trading at $77.82 per share. Earlier this week Citi analysts upgraded CoreSite, Digital Realty, and DuPont Fabros from Neutral to Buy.

In hindsight, the irrational CoreSite trading after announcing a huge dividend hike may have been the inflection point that signaled a near-term bottom for the entire data center sector.

Data Canopy is a CyrusOne "ecosystem partner" that leases wholesale space and provides managed services to its own customers from locations in six US cities. On Tuesday, before the opening bell, the companies jointly announced that Data Canopy was providing "comprehensive disaster recovery services" for an unnamed $2 billion national insurance company at a CyrusOne data center facility in Austin, TX. 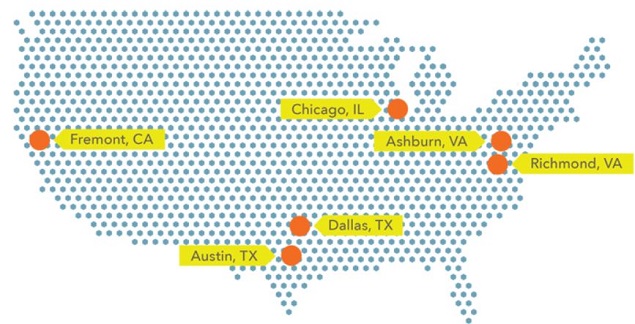 According to the joint release,

"CyrusOne delivered a stable and highly reliable architecture that was flexible and scalable enough to meet our client’s needs," said Jennifer Herson. "When considering new locations for the client’s disaster recovery services, we focused on Texas, as it is an established data center market and has a strong fiber network. CyrusOne connects 10 GB of bandwidth from a disaster recovery center in Austin back to our facility in Virginia. We also have the scalability to upgrade from standard power currently to a higher power density later on."

Data Canopy currently leases data center space in three facilities in Ashburn, VA owned by RagingWire, Zayo, and Equinix. Notably, this insurer has contracted for a 100 percent uptime SLA to ensure zero interruption for employees located across 48 states who work around the clock. No other lease terms were revealed in the announcement.

It has been a bipolar year for shares of the six publicly traded data center REITs. Massive deployments by Amazon, Microsoft, Oracle and other planet-scale cloud service providers have driven several consecutive quarters of record net absorption in many US Tier 1 data center markets.

During 2016, most data center REITs reported record leasing and booked-not-billed backlog, and analysts listened to management discuss large sales funnels and deal pipelines on quarterly earnings calls. These positive reports led to some irrational exuberance on the part of investors during the summer of 2016, driving up share prices to frothy FFO/AFFO multiples.

Eventually, concerns regarding a rising interest rate environment began to chip away at the 50 percent average gains chalked up by data center REITs during the first half of the year. 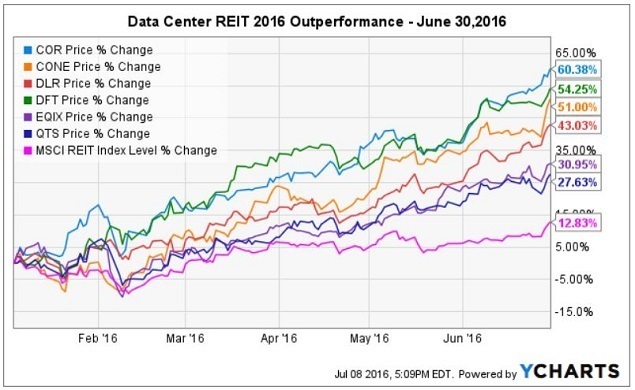 Analysts and investors began to voice concerns regarding how long this leasing windfall could last, and wondering about what levels will actually become the "new normal" in various markets.

Mr. Market began to discount good news from the data center sector. It was particularly noticeable regarding CyrusOne which had racked up the largest collection of wholesale leasing wins during the past couple of quarters. Some analysts reportedly were concerned that CyrusOne may be "buying the business," at lower margins.

CyrusOne CEO Gary Wojtaszek addressed those concerns with analysts directly during recent earnings calls. He credited the company's "Massively Modular" building program as being responsible for both the speed to market and cost savings advantages.

However, during the Q3 2016 earnings release, CyrusOne’s announcement of a CFO change caught analysts and investors by surprise. Wojtaszek summed it up succinctly, "These things are never good…" answering a question on the earnings call regarding the sudden CFO transition. However, he immediately clarified his comment, pointing out that "Greg [Andrews] has done a masterful job here…" Notably, there was already a succession plan in place. Industry veteran Diane M. Morefield had already been tapped to assume the CFO role, and she came aboard in mid-November.

During the past week, for the first time since the election -- despite the 10-year US Treasury interest rate continuing to rise -- data center REITs are once again being viewed positively by Wall Street investors.

The tailwinds driving the data center narrative have not changed. The secular drivers of cloud computing, streaming media, wireless data and the rise of the Internet of Things will continue to drive demand for both wholesale and retail data center leasing. The favorable supply and demand fundamentals on ground in most markets have not changed either.

In a rising interest rate environment, the ability for data center REITs to deploy new capital at mid-teen ROIC and deliver consistent FFO/AFFO per share growth, will continue to attract investors seeking dividend income and growth at a reasonable price.

CyrusOne shares have gained back ~16.75 percent during the past month, but they are still trading about 18 percent off of the highs for the year. Investors are adjusting to the latest new normal -- a Trump administration and rising interest rates -- while still dealing with uncertainty regarding how long the cloud land grab will last.