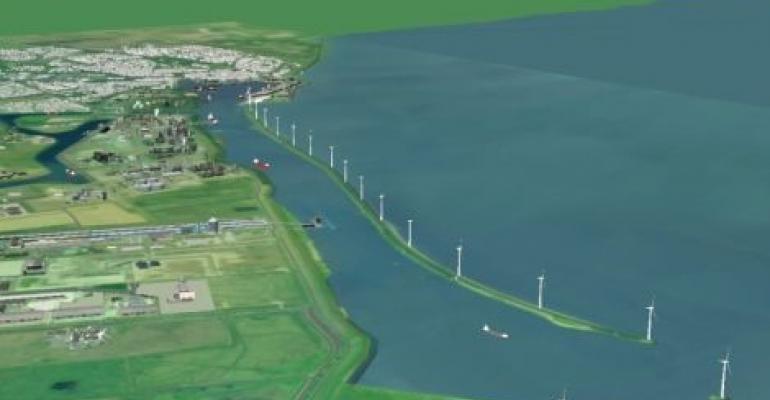 The wind that will be powering Google’s latest European data center facility has a foul odor to it. It’s coming from certain people involved in selecting European sites, one of whom has pled guilty of conspiracy.

Just days after making a pledge to power all of its worldwide data centers with 100 percent renewable energy by the end of 2017, Google very quietly opened its Eemshaven, Netherlands facility last week, according to Dutch online news service NU.nl, which spoke to local union leaders there.

But the news wasn’t even covered on Google’s own Web page for the facility, and Google has yet to respond to Data Center Knowledge’s request for details.

When ground was broken on the project in September 2014, it was to be built on 109 acres of prime real estate in the Dutch seaport, with a projected investment of $773 million.  As it stands, the facility was opened on time, although we know nothing more yet about the company’s budget goals.

In a company blog post published at the time of groundbreaking, William Echikson, who headed Google’s data center community relations then, pledged that the facility would run on 100 percent renewable energy, and would be fully free-cooled, including with the use of “grey water” (unfiltered, untreated, but not yet waste water).

Indeed, just a few months after that post, Google entered into a 10-year deal with Eneco, one of the Netherlands’ major gas producers.  That company had already been constructing a 19-turbine wind farm in Delfzijl, just a few miles south, using partially offshore turbines built on an artificial reef.  That production facility opened in September 2015, with Eneco reporting its total production capacity at 62.7 MW.

Although that facility could power as many as 55,000 Dutch households, the industry publication Wind Power Intelligence reported the previous December that Eneco’s 10-year deal with Google was for its entire output.

So why the quiet attitude?  It would appear Google’s project is another in a string of successes.

As it turns out, a former Google director and European data center contract negotiator named Simon Tusha pled guilty last May to one count of conspiracy to defraud the U.S.

Specifically, Tusha admitted to receiving kickbacks from both Dutch and British companies, and then hiding those kickback funds through a series of shell companies.  U.S. investigators stumbled onto Tusha, according to the Pittsburgh Post-Gazette, quite by accident — through a criminal investigation of a Pennsylvania drug ring operated by one of the men involved in Tusha’s shell companies.

Late last month, Dutch real estate magnate Rudy Stroink, the former head of TCN Group, known in the Netherlands as the “Mr. Clean of Real Estate” — was indicted for allegedly paying out the bribes, totaling some €1.7 million, to which Tusha pled guilty of receiving.

The story is front-page, live-coverage news all over the Netherlands, involving one of its most well-known public figures.

For its part, Google has distanced itself from the proceedings, issuing a statement last month saying that the Eemshaven project began after Tusha had already left the company, and adding, “We are the victim of the crimes that will be charged.”