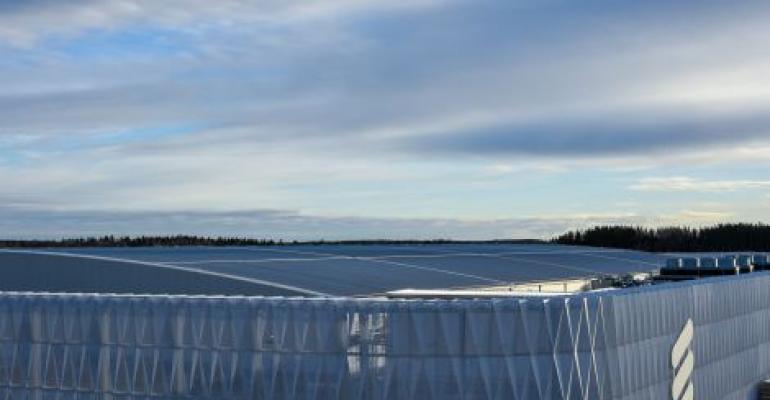 Ericsson Launches ‘Hyperscale’ Quebec DC with Half the Size, One Year Late

It’s a brilliant and beautiful complex, with a longer construction history than its builder would have liked, and a set of basic specifications that add new dimension to the notion of “give-and-take.”

It’s one of the hallmarks of so-called “hyperscale” data center architecture: the ability to scale out workloads while increasing efficiency and consuming less space.  Sweden-based global communications technology firm Ericsson appears to have achieved this goal quite literally.  At a Friday morning ceremony in Vaudreuil-Dorion, Quebec, just on the western side of the Lac des Deux Montagnes across from Montreal, Ericsson cut the ribbon on its long-awaited Global ICT center — its only data center facility in North America.

It’s an amazing feat, given that the shell of the unique facility was constructed first, back in 2014.

The facility’s key purpose will be to serve as a full-scale emulation facility for prospective, future telecommunications networks.  Ericsson has built its own cloud, quite literally:  Using its own server architecture, and working in conjunction with Intel with its Rack Scale design specs, Ericsson’s engineers plan for Vaudreuil-Dorion to serve as a staging facility for mobile operators to test their applications on next-generation NFV networks.

Telcos and mobile operators have already been backed against a wall:  They must adopt the technologies necessary to sustain the phenomenal pace of growth in customer demand, and they must take steps now to intentionally render their old networks obsolete.  Such pressures have forced carriers such as AT&T to take unprecedented steps, such as accelerating the adoption of open source architectures and virtualized functions, effectively trying to accomplish in two years’ time what ordinary forces of technological evolution would have done in twenty.

In the spring of 2015, Nokia Networks — one of Ericsson’s principal competitors in the communications infrastructure space — acquired Alcatel-Lucent, the descendant of the company that acquired Bell Laboratories.  Though Ericsson seemed healthy enough, having just completed a partnership deal with Amazon Web Services, speculation increased over Ericsson’s need to make a similar deal just to stay competitive.  The firm had brought on another partner: Cisco, this time to accelerate its efforts at staging 5G wireless networks.

By the following summer, Ericsson earnings began tanking, as subscriber growth appeared to wane.  Then the following June, the bottom dropped out.  When Ericsson was forced to reveal it was cooperating with a U.S.-based corruption probe, it acknowledged it had been receiving inquiries since March 2013, regarding business practices in Romania.

Its board of directors ousted their CEO, and his replacement, Börje Ekholm, told Dow Jones the problem with his company was twofold:  It wasn’t prepared for the market downturn, and it hadn’t invested in its technology like it should have.

On a development plot in Quebec, just as the weather started to turn cold, things started to warm up for Global ECT.

The Vaudreuil-Dorion complex has the same basic structure as Ericsson’s two other ICT facilities, based in Sweden (one of which is pictured above).  It is certainly a thing of beauty:  Steel pillars drilled deep into the earth actually suspend the building’s foundation above-ground by several feet.  A 31-foot aluminum, diamond-textured fence surrounds the facility, providing an effective sound baffle.

According to the accreditation firm that certified Global ECT, the building improved the cooling efficiency by 25 percent over its baseline design, by doing what many other big data center builders promise to do but never deliver: employing an airside economizer.

This system draws in maximum outside air, taking advantage of Quebec’s cooler climate, and reducing or even eliminating the need to mechanically draw in cool air during the winter months.  A chilled water loop helps draw in the cool air without the use of fans.

When the Montreal Gazette visited the facility under construction last January, it was “on track” for being opened in just three months’ time.  At the time, the reporter jotted down this figure: 600,000 square feet (close to 56,000 square meters).

As the facility was officially opened Friday, Canada’s press was given the figure, 20,000 square meters, and that’s what they ran with.