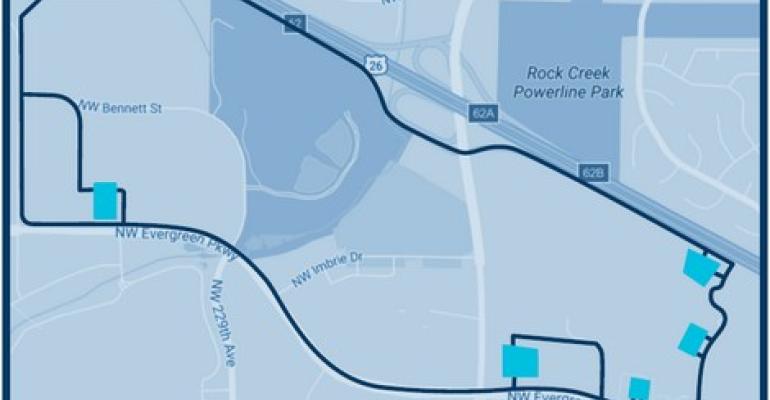 In a lease agreement announced this morning, hybrid colocation provider ViaWest announced that CoastCom, the operator of an important fiber-optic asset that is coming to be known as the “Hillsboro Ring,” is opening full access to two of ViaWest’s Hillsboro, Oregon-based facilities already connected to the ring, from other data centers also connected.  This makes the ring a vital a cross-connection point for Oregon’s growing data center market, as well as for a strategically critical submarine cable landing station.

“The metro fiber allows clients to connect from any data center on the ring in Hillsboro to the ViaWest data centers,” said Tim Parker, ViaWest’s vice president of cloud and network services, in a note to Data Center Knowledge, “without the need of carrier circuits to access the undersea cable carriers.  This improves the overall cost and delivery of service and removes the need for expensive and complex transport hardware.

“The ring is diverse, and from any point on the ring, remote clients can connect through a simple metro cross connect,” Parker continued, “similar to being within the data center.”

ViaWest operates two of the six data centers connected by the Hillsboro Ring, the northern edge of which runs parallel to NW Sunset Highway (U.S. Highway 26) northwest of Portland.  The other four are run by Digital Realty, EdgeConnex, Infomart, and Tata Communications.

It’s this latter connection that’s key:  Tata runs the TGN Hillsboro Cable Landing Station, an inland junction to the TGN Transpacific cable system.  This is a 6-terabit cable linking Twin Rocks, Oregon with Emi and Toyohashi, Japan; but also with southern California as far south as Redondo Beach; as well as with Piti, Guam.

A report to the Oregon state legislature [PDF] published last month by the Oregon Broadband Advisory Council cites the strategic importance of the Hillsboro Ring to the state’s economy.  The Council noted that the state currently lacks any Tier 1 peering facilities within its own territory.

The best way to improve Oregon’s stature, enabling its own businesses to compete with California’s in the valuable cross-connection market, the group states, is by gathering its most valuable assets together to make the strongest pitches possible to prospective connectivity providers.  The group specifically cites the Hillsboro Ring, coupled with its connectivity to the cable landing station linking Asia and the Pacific Rim, as key to this strategy.

“If Oregon can raise its position on this hierarchy, there are potential economic development benefits,” writes OBAC.  “The next two years will be critical in determining Oregon’s future position in the Internet hierarchy, and Oregon has some valuable assets that may be leveraged to improve its position and pursue Tier 1 peering within the state.”