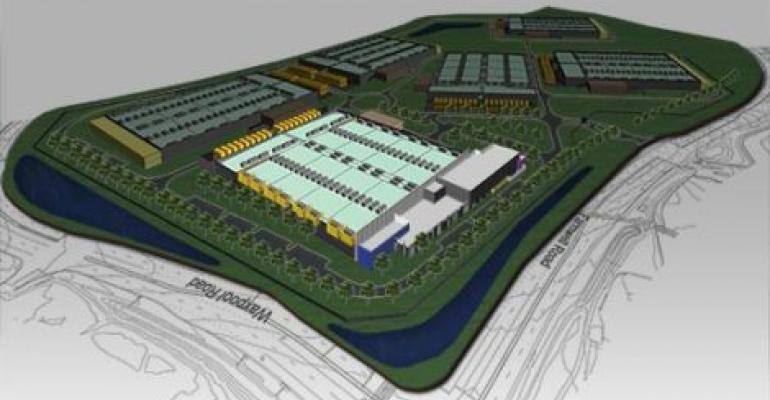 In an astonishing signal of how much commitment is required for a data center operator to remain competitive in a hot market, Reno, Nevada-based RagingWire – a unit of Japan telco giant NTT Communications – announced Monday at the Gartner Data Center Summit in Las Vegas that it will be building a third massive data center complex in the Ashburn, Virginia area.

If data had its own preference on where to reside, then the first pictures of RagingWire’s VA3 complex look like a veritable country club.  Some 245,000 square feet of space will be allocated over six buildings on a 76.5-acre campus, nearly doubling the provider’s real estate in the region centered just 30 miles northwest of the nation’s capital.

Indeed, a golf course is located in the vicinity of the building site, which lies at the corner of highways 640 and 625 in Loudoun County, Virginia.

RagingWire says it plans to invest some $160 million into the complex, which is expected to be completed before the end of the next calendar year.

The provider’s aggressive growth plan began three years ago, when NTT purchased 80 percent of the firm.  It was only earning $85 million annually at the time.  Just after the purchase, RagingWire announced its intent to build VA1 in Ashburn.  Starting at 150,000 square feet, the firm publicly announced its intent to build out to 10 times that space.  So even with VA3 completed next year, RagingWire will be only one-third of the way through its 2013 plans for the region.

A 451 Research report released just last week by analysts Lisa Stauffer and Kelly Morgan found that the Ashburn area has effectively become the United States’ largest single data center market, outpacing even California.  Even at the pace that providers including RagingWire are building there, they report, demand continues to outpace supply, especially for the near-term.

While forecasters had projected that major cloud service providers would be able to tamp down some of that growing demand, Morgan and Stauffer say that these dire predictions don’t appear to be playing out.  One advantage that builders seem to be having is by leveraging their existing scale to produce powered shells faster than other firms can, and even faster than the major cloud players.

One of Amazon’s largest server farms is based around Ashburn, extended over some 20 separate facilities in the area.  Meanwhile, Equinix operates about a half-million square feet of space in the Loudoun County area, and Digital Realty about 1.5 million.  Microsoft operates plenty of facilities in the area, although its hyperscale operations on the east coast are based around Boydton, southwest of Richmond.