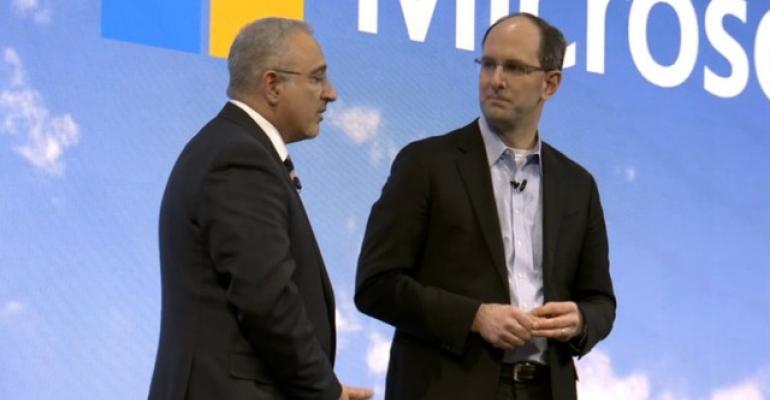 The timeframe is finally tightening for the release of Microsoft’s long awaited data center operating platform, Azure Stack, based on the same platform that runs the company’s public cloud service — at least from the perspective of Microsoft’s partners.  In remarks made during the Tuesday general session at the HPE Discover London 2016 conference, HPE Executive Vice President Antonio Neri [pictured left] told attendees that, if their organizations were to sign on to Microsoft’s ongoing preview program today, they would be ready when the limited release of the platform goes live on HPE servers in six months’ time.

“The good news is, this is going to be available in the next six months,” said Neri.  “But the reality is that they [organizations] don’t need to wait six months.  They can start planning that journey today.  So we’re already working with customers, already planning for that journey.”

Azure Stack is intended to give organizations a platform for deploying new classes of so-called “cloud-native” applications on-premises, with the same tools and automation used to deploy them in the Azure public cloud.  Azure Stack thus becomes a hybrid platform that gives Microsoft a chance to get back on par with OpenStack, the open source hybrid platform based on Linux.

Microsoft would have a few advantages at that time, some of them being obvious.  Visual Studio — which for many organizations remains the leading, if not the only, software development suite — would have a direct line to an automated deployment pipeline that works for both cloud domains.  And because its deployment and management tools have already been honed on the Azure public cloud, not only would they be familiar to many users, but likelier to be embraced by DevOps professionals who have yet to become enthused by OpenStack’s cobbled-together, frequently-changing, methods.

One not-so-obvious advantage is this:  Microsoft’s increasingly friendlier relations with Docker Inc. are helping to ensure that no innovation in the field of containerization will be unveiled on a Linux platform first, before a Windows Server-based platform gets a crack at it.

But Azure Stack’s readiness for prime time has been under heavy scrutiny, as a result of Microsoft continually delaying its general release.  When the platform was first announced in May 2015, it was touted as being just around the corner.  Suspicions of problems were confirmed in July, when the company officially stated it would delay general release until mid-2017, while in the meantime limiting initial releases of the platform to select servers, in joint marketing arrangements with HPE, Dell, and Lenovo. 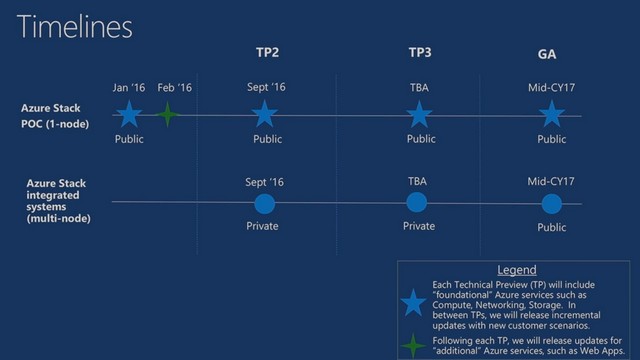 During a session at Microsoft’s Ignite conference in Atlanta in September, private cloud solution architect Spencer Shepler shared what passed for a timeline for the development tracks of Azure Stack’s single-node proof-of-concept and its multi-node integrated systems.  What was missing from the timeline were times, except for a vague reference in the rightmost column referring to general availability in the middle of calendar year 2017.

An unmarked milestone pointed to the release of Technical Preview 3, sometime between now and then.

Microsoft veterans will recall that, historically, the company’s definition of the middle of a year has sometimes stretched forward into January.

In the meantime, the company is making good on its July pledge to let the world’s top 3 server makers unveil the platform first.  At HPE Discover London, Microsoft Executive Vice President Scott Guthrie introduced a video showing what he described as Azure Stack’s management portal integrated with HPE’s OneView management suite, but which looked quite a bit more like Azure Stack than OneView.

One interesting technique the video showed was the ability to live-migrate a virtual machine from on-premises hardware to public Azure space, prior to shutting down that hardware for maintenance.

“Azure Stack enables organizations to basically run an even richer set of Azure services within their own data centers,” said Guthrie [pictured right in top image].  “It provides a consistent development model, as well as management model and overall ecosystem, across both the public and the private cloud environments, so that you can build applications that leverage the richness of Azure, both from an infrastructure as well as a platform-as-a-service capability, and deploy them wherever it makes the most sense for your business.”

Which sounds nice, assuming it all gets delivered.  HPE’s Neri told attendees that their organizations can take advantage of HPE’s early access to “the bits” of Azure Stack, by visiting their local HPE + Microsoft Innovation Center.  Guthrie then followed up to tell the London-based audience that the Innovation Center nearest to them — at least, while Azure Stack remains in technical preview — is in Seattle.