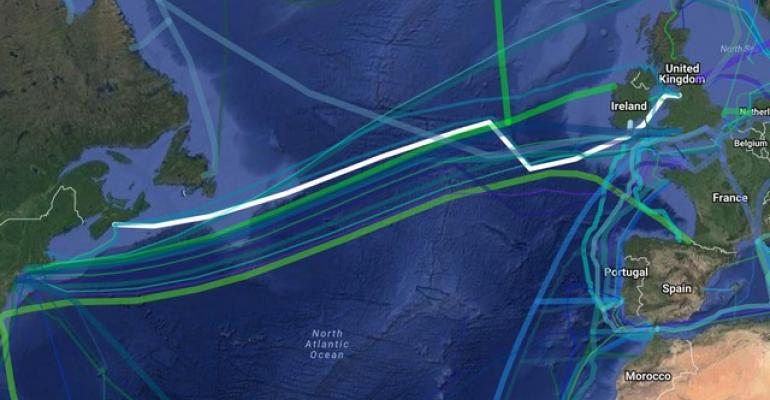 With a population under 70,000, Moncton, New Brunswick was originally known for its wine and food festivals as a tourist destination, and its location just a few miles from the beaches.  But geographic positioning smack in the center of Canada’s Maritime Provinces and close to the Northumberland Strait, made it a strategic center for Internet traffic across the Atlantic Ocean.

Back in February, 2015, a colocation provider called Fibre Centre launched a combination submarine cable junction point and network-neutral colo facility in Moncton in a building overseeing the Petitcodiac River that leads into the Bay of Fundy.  It’s a 23,000 square-foot facility with N+1 redundant power and cooling and access to dark fiber.  Nice, if you’re opening a bunch of bank branches along the North Atlantic coastline.

When it opened, Fibre Centre’s advantages appeared to be that it sat cattycorner of a lovely park, and was near a Tim Horton’s donut shop.  Today, it stands at the focal point of transatlantic Internet commerce.

Just across the Bay, you see, is Halifax, Nova Scotia.  The Hibernia Express cable — a submarine system whose builders profess upwards of 53 terabits of total capacity — links Halifax directly with Cork, Ireland and Brean, England, at the mouth of the Bristol Channel.  (Presently, it’s listed by Greg’s Cable Map as providing 8.8 Tbps on a theoretical capacity of 42 Tbps.)

When it came online in September 2015, the independent telecom infrastructure analysis firm TeleGeography estimated that it improved on measured latency in transatlantic transactions by about 20 percent.  Then last January, it improved on that figure by purchasing additional backhaul.

If information is the most valuable of modern commodities, then Hibernia Express is one of the world’s most valuable shipping lanes.

Which makes Monday’s development not so ordinary after all:  Fibre Centre has acquired a new tenant, in the form of Hurricane Electric, touted to be the world’s fattest IPv6-native Internet backbone provider.

Hurricane operates some 17,000 active BGP sessions (low-level Internet gateway protocol), the status of which is reported live.  In March, it crossed the threshold of providing some 5,000 points of adjacency to IPv4 networks; and at the time of this writing, that number had swelled to 5,931.

According to Canada’s Global News, while the unemployment rate for New Brunswick is 10.2 percent, Moncton is struggling to fill nearly 3,000 IT job vacancies.  The area is evolving so fast with respect to its technological capacity that it’s creating a huge skills gap that the education system is racing to fill.

Once again, a cable connecting a handful of points on the globe is changing the rate at which that globe spins.