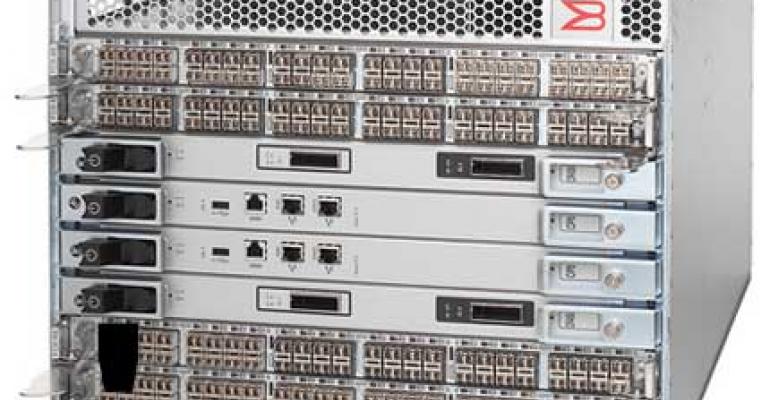 The Brocade DCX-4S Backbone, which is launching today.
Companies

When Brocade Communications completed its acquisition of municipal Wi-Fi provider Ruckus Wireless last May, it informed investors that the deal would create a new kind of pure-play networking company.  That seemed to be what the networking technology market wanted... up until this morning, when networking IP giant Broadcom Limited announced its intent to acquire Brocade, in a deal which Broadcom valuates at $5.9 billion.

“We were not looking to sell the company,” wrote Broadcom CEO Lloyd Carney, in a company blog post Wednesday morning.  “However, when Broadcom approached us with a compelling offer, we had an obligation to consider that offer, along with other alternative opportunities.”

It was almost as if Carney succumbed to the idea as the inevitable fate of doing business.  One wonders if the Ruckus deal would have been completed had either party to that deal could peek just six months into their future.

So Much for Pure-Play

Broadcom made it clear that it was not actually acquiring a pure-play networking company.  In fact, two of the components which analysts speculated would make such a deal attractive, as late as yesterday, were not even on the table: Ruckus, and the virtual IP networking business that put Brocade on the map.  It only wants Brocade’s Fibre Channel SAN business, and not even because it foresees growth for that market.

“We’re not buying this business, Fibre Channel SAN, because we think it will grow dramatically over the next five years or ten years,” said Tan.  “We foresee it to be in the range of what it was over the last five years.”

Broadcom will help Brocade to sell off both Ruckus and its IP networking business, said Tan.  He phrased that statement more than once as a reassurance to Broadcom’s partners that it is not getting into the systems business and will not be competing with its own customers, even though Brocade holds some very valuable intellectual property in the SDN category.

At almost the same time, though, he also praised Brocade’s FC SAN portfolio for its intellectual property value as well as for its value as storage appliances.  But repeatedly, Tan and CFO Tom Krause acknowledged that FC SAN is not, and probably will not be, a growth business per se for Broadcom.

Rather, it provides a necessary component to Broadcom’s catalog that had been missing.  Tan painted a picture of a data center systems and components market where customers are capable of selecting parts from multiple vendors, but at the same time rate the quality of those vendors on the breadth of their platform portfolio.  And he had reason to believe Broadcom was deficient in this category.

“We also do perceive a large number of customers — particularly larger enterprises like financial institutions, telcos, cable operators, government — need dedicated and highly secure storage infrastructure, for managing and sharing mission-critical data used often in private data centers or on-premises.  Storage-area networks are a key solution to meet this need,” said Tan, at one point citing AT&T and Bank of America as example customers in this space.

Later in the call, responding to an analyst who had pointed out Brocade’s own previous assessment of its FC SAN business as a no-growth, or even steadily declining, revenue channel, Tan went so far as to predict those numbers would not change — insofar as they apply to the FC SAN market separately.

But as a component of a larger platform that must sell to certain classes of enterprises that Tan described as highly “risk-averse,” FC SAN offers particular value to Broadcom in this particular situation.  The transition of enterprise storage to a hybrid model stops, he explained, when high security and high availability factor into the equation.  If Broadcom doesn’t provide those options, he said, customers will look someplace else.

About five to ten percent of the FC SAN market is moving to lower-cost alternatives, he said, utilizing public cloud infrastructure, and integrating iSCSI and IP-over-Ethernet.  But Tan believes — in his own words, “ironically” — that a Broadcom presence in the FC SAN market will help even those customers transition to lower cost storage, involving technologies where Broadcom has already established an intellectual property presence.

“But I would say this is a very gradual move,” remarked Tan, “because storage, as you know, is an extremely risk-averse custom, especially mission-critical storage.  Any move is slow.”

There are technological shifts under way, the CEO pointed out, from 16G Fiber Channel standards to 32G.  But the amount of time it would take this class of customers to make the move starting now, he predicted, could be as long as six years.

The deal is currently pending approval from Brocade’s and Broadcom’s shareholders, and will face regulatory scrutiny.  Still, it leaves up in the air the fate of two businesses which even Broadcom’s Tan acknowledged are high-growth, lucrative, and desirable.

Ruckus Wireless burst onto the scene in 2012, with an ambitious move to offer free-to-the-public municipal Wi-Fi service to San Francisco and San Jose.  Launched two years later, Ruckus’ project replaced an earlier venture with MetroFi, that was canceled after that company left its half-built towers derelict, forcing angry taxpayers to fork over funds to deconstruct them.

The jewel in Brocade’s crown is Vyatta, its software-based SDN controllers, acquired through a 2012 acquisition.  It became a true market disruptor in 2014, integrating open source technology from OpenDaylight, and making it feasible for organizations to stage their network infrastructure completely within x86 boxes.

Last May, legendary Brocade engineer Tom Nadeau spoke with Data Center Knowledge, discussing how network functions virtualization could enable very high-availability networks to run on OpenStack.  The driving need for organizations, he told us, was to be weaned off of their first generation of virtualization, into an environment where multiple generations of software workloads could co-exist.

These institutions, from Nadeau’s characterization, were not risk-averse.  And some of them were the same class that Brocade CEO Tan singled out.  Evidently there’s a difference of opinion.  That difference may be the thread upon which the future of Brocade’s SDN/NFV portfolio presently hangs.