The first availability region of Oracle’s new cloud platform, designed by some of the same people who built Amazon’s, Microsoft’s, and Google’s cloud infrastructure, has been launched, hosted by three data centers in the Phoenix metropolitan area. The bare-metal cloud platform will serve as the foundation for upcoming cloud VM and container services.

While Larry Ellison has been touting the might of Oracle’s cloud for years, the company has been far behind its rivals in the cloud infrastructure services market in terms of revenue. This latest attempt is its biggest effort yet to catch up, leveraging its experience in the enterprise, its hardware design and global supply chain expertise, and the cloud infrastructure know-how of the biggest players in the market.

“I am surrounded by several hundred people who came from Amazon, Microsoft, Google,” said Deepak Patil, Oracle’s VP of development, who joined earlier this year after 15 years at Microsoft, where for the last 10 years he worked in senior engineering roles for data center and cloud infrastructure. “We all built very large-scale, global, elastic, highly available cloud platforms for the better part of the last decade.” 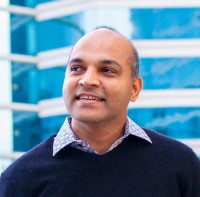 To Patil and his colleagues, joining Oracle was an opportunity to build a cloud platform from scratch, applying lessons they learned while building the other hyper-scale platforms, he told Data Center Knowledge.

Ellison, Oracle founder and CTO, announced the bare-metal cloud at the company’s OpenWorld conference in San Francisco in September, promising the best price-performance combination in the industry. That advantage comes as a result of the design decisions Patil’s team has made, Patil said.

One of the most important elements of the platform is the Software-Defined Network, which makes the platform extremely scalable. Patil describes the SDN as “an extremely flat, non-blocking, non-oversubscribed virtual relay network that allows us to scale in a really big way.”

The SDN, capable of both Layer 2 and Layer 3 networking is a differentiator for Oracle, Lydia Leong, a Gartner analyst who has received a detailed engineering briefing on the solution, wrote in a blog post. “I would say that smart and scalable choices seem to have been made throughout,” she wrote.

Another big design decision was “off-box” virtualization, which places virtualization in the network instead of on the servers, enabling Oracle to give customers true bare-metal cloud servers, machines that have no pre-installed software. The SDN accesses the servers strictly at Layer 2.

“What that allows us to do is deliver fairly differentiated governance and security for our customers,” Patil said. “We have no agents on the server. Our servers are not exposed to any hypervisor exploit.”

Scaling Several Megawatts at a Time

The first availability region, officially launched today, is called US Southwest. The infrastructure that supports the region lives in three availability domains. Each domain is a separate data center, and US Southwest is hosted in three facilities in the Phoenix region located within several miles of each other.

Availability domains will not be limited to one data center per domain, Patil said. Each domain will have at least one data center and several megawatts of critical power capacity. You can look at a data center as a unit of capacity for each domain, he explained.

The next region will be US East and will be hosted in Virginia, where the world’s biggest concentration of cloud data centers is, including the largest availability region for Amazon Web Services.

For now, Oracle is using data center providers to host its cloud infrastructure. Patil declined to specify which providers it is using where, saying that the list includes Digital Realty Trust, Equinix, CenturyLink, RagingWire, and CyrusOne. These are the companies that will be enabling global expansion of the new Oracle cloud.

As a bare-metal cloud, it will compete most closely with the likes of Packet, CenturyLink, and Rackspace, she wrote. Because it is billed by the hour and provisioned in minutes, Oracle’s cloud stands apart from bare-metal offerings that are more “hosting-like,” such as IBM SoftLayer, Internap, and Cogeco Peer 1.

Once Oracle launches cloud VM and container services, it will have a lot of catching up to do to expand its feature set and truly compete with the likes of AWS and Google.

“Good price-performance is table stakes here,” Leong wrote. “This is not a commodity market; providers compete on their capabilities.”