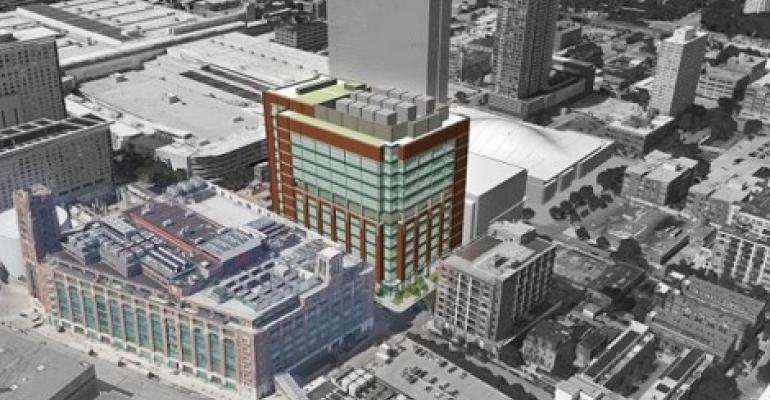 Site for the planned 12-story facility is reportedly shovel-ready, but construction crews will not break the ground until a major anchor tenant is on board.

Digital Realty Trust is planning to build a massive, 12-story data center in the South Loop of the Chicago Central Business District, which it says will act as an "annex" to its iconic building across the street, at 350 East Cermak, one of the world's largest carrier hotels and a key network access point for financial services firms involved in the Chicago commodities market.

The proposed facility at 330 East Cermak will be a 54MW tower containing 660,000 square feet of space, built on two acres of land owned by industrial developer CenterPoint Properties, which will contribute it to a joint venture with Digital Realty.

Digital, a San Francisco-based data center REIT, is billing the future Chicago data center as an expansion of 350 E. Cermak, which has historically been in high demand because of the large amount of networks that can be accessed there. Until recently, Telx, which Digital acquired last year, operated the network meet-me room in the building.

That room and meet-me rooms in other locations were one of the key attributes that made Telx attractive to Digital, which recently pivoted from being an almost strictly wholesale data center provider to an interconnection-centric one with a mix of wholesale and retail colocation services. Bringing more capacity to downtown Chicago for companies interested in low-latency access to 350 E. Cermak will give this new strategy a big boost.

It can take years to reach the point when a project has all of the entitlements necessary to break ground in any CBD, and getting a big construction project off the ground in Chicago is especially difficult. Representatives from Digital Realty, CenterPoint, and CBRE -- which is marketing the future data center -- told Data Center Knowledge the project was "shovel-ready," which is a significant milestone.

The partners expect the data center tower to be completed within two years of breaking ground. However, the timing for commencement of development, as well as the final size, power density, and redundancy configuration will be subject to market demand.

The next challenge facing the development team will be to sign up one or more anchor tenants to de-risk the new development. Unlike most suburban data center campuses, there is no practical way to phase a 12-story data center tower, so upfront commitment from one or more big tenants is a must before ground gets broken.

Additionally, it is far more cost-effective to build out large data center halls in a mid-rise building in a downtown CBD while the contractor is mobilized for construction of the building shell. 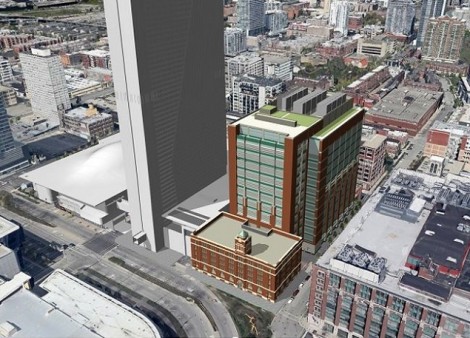 The uncertainty of the development timeline will certainly make the task of signing anchor tenants more challenging for CBRE and the development partnership team. It is a classic "chicken and egg" challenge that must be overcome in order to break ground.

Demand for data center capacity in top North American markets is outpacing supply, however, and Chicago is an especially tight market, according to CBRE and other real-estate brokers who specialize in data center space.

The site's adjacency to CHI1 makes it a unique data center offering for this market, and it should appeal to cloud service providers who value connectivity options and low latency and who take down data center space in big chunks.

An Interconnection Hub and Historic Landmark 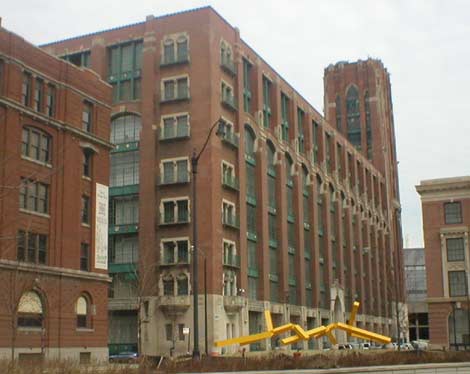 The eight-story Lakeside Technology Center at 350 E. Cermak contains over 1.1 million square feet of space, with 109MW of utility power provided by Commonwealth Edison. The gothic-style building was originally built in 1912 by R.C. Donnelly Co. as a press facility for Yellow Book and Sears Catalog.

This downtown Chicago icon was converted to telecom use in 1999 by The Carlyle Group and acquired by Digital Realty in 2005. It is connected to Digital's CHI2 data center at 600 S. Federal in Chicago, as well as its suburban Franklin Park campus.