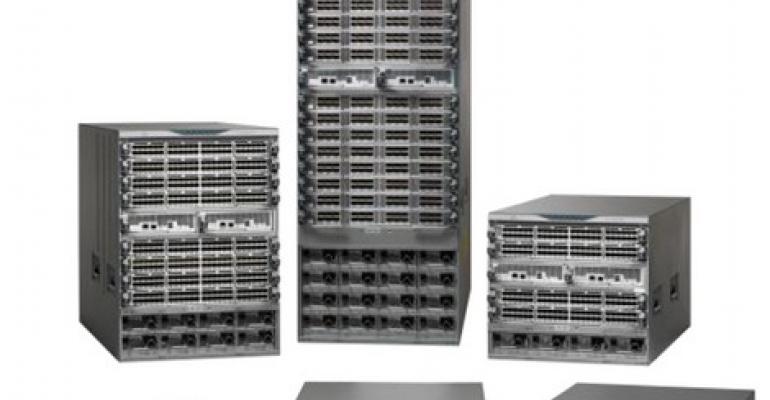 With all the ingredients finally in place in one family of switches and a revised family of storage directors, will convergence happen at last?

For more than eight years now, networking products vendors — and the analyst firms that cover them — have touted the promise of converging LAN and storage traffic over the same Ethernet pipes.  In its latest move to make that long-extended forecast finally come true for enterprises, Cisco announced Wednesday updates to its top-of-the-line Nexus 9000 series switches [pictured above] that add support for Fibre Channel over Ethernet (FCoE), and add support to its MDS storage network products for Fibre Channel over Internet (FCIP).

“10/40G FCoE is now available on 9K [Nexus 9000] platforms,” said Tony Antony, Cisco’s senior marketing manager for data center products and solutions, in a note to Data Center Knowledge, “in both ACI mode and NX-OS mode.  On top of that, we are also introducing 25G/50G/100G IP Storage capabilities on certain 9K platforms.”

“The new SAN-Extension module which Cisco launched will be supported on MDS 9700 Multilayer Director Chassis (MSD 9706, MDS 9710 and MDS 9718) and will provide the FCIP SAN-Extension capability to enable backup/replication solutions between two data centers,” Antony told us.  “With this module, Cisco brings a modular platform for customer requirements around speed, scale, density, availability and resiliency for SAN-Extension solutions.”

Cisco ACI (Application Centric Infrastructure) is the company’s policy-driven system for managing network configurations based on the needs of workloads.  But it’s a very different methodology from how data centers presently operate, which is why Cisco also maintains NX-OS.

The company’s goals for Nexus 9000 (9K) are already on record:  It wants enterprises to attach 9K switches into existing Cisco switch-based networks, preferably alongside the 5K tier (in-between the 7K and 2K tiers in a five-tier hierarchy).  Here, in an NX-OS environment, 9K would play an intermediate role between top-of-rack switches and servers hosting virtual machines.

Those servers would then become endowed with Cisco’s AVS virtual switches, giving them access to “virtual leaves” to newer spine/leaf configurations, in the newer side of the data center running ACI.  This way, migration between old and new network platforms can take place at customers’ own pace.

“We recommend a step-by-step approach,” Antony told us.  “Implement FCoE in the access, then move to core. . . Rip and replace is not needed. You can have a phased approach.  The current applications will be perfectly fine.  As new applications are deployed, customers consider more agile architecture (ACI/9K) and hence customers’ investments are fully protected.”

But into that mix of NX-OS and ACI, Cisco is now tossing either a fat pipe or a monkey wrench.  It’s a bridge between LAN and SAN, the common elements here being support for 100 gigabit-per-second, 50 Gbps, and 25 Gbps IP storage networking in 9K switch models, and reciprocal support for FCIP in more models of its MDS 9700 Multilayer Storage Director (beyond the MDS 9250i), due for release sometime during Cisco’s fiscal year 2017 (which ends in Q2 of calendar year 2017).

The grout for that connection will be supplied by a revision to Data Center Network Manager (DCNM) software that adds end-to-end management of converged SAN/LAN networks.

“DCNM provides the option to either install LAN or SAN or the converged product line,” Antony told Data Center Knowledge.  “With role-based access control [RBAC], one can have different departments responsible for SAN and LAN while a super DC user can see both.”

End-to-end management and RBAC are features that Cisco described as an absolute necessity for any SAN and LAN convergence to take place. . . during an online conference some five years ago [PDF].

“Cisco said that there are three key requirements,” wrote Dr. Jim Metzler, the conference’s moderator, in a summary published in September 2011.  “One of those requirements is a converged management platform that includes functionality such as provisioning and monitoring.  The second requirement that Cisco mentioned is role-based access control (RBAC) to enable the tasks and roles of the SAN and LAN administrators to be kept separate and contained.  The third requirement is the ability to have a VM-aware topology view that shows all the dependencies from the VM out to the physical host, through the fabric, and to the storage array.”

“While the cost of FC switching has come down over time,” wrote Forrester’s analysts in February 2011, “Ethernet is cheaper on a per-port basis and is likely to continue to be less expensive due to the higher volumes and larger pool of vendors serving the space compared with the relatively narrow and low-volume field of FC.  Moving storage traffic to a form of Ethernet, a technology that is ubiquitous in data centers today, is seen by many as a move toward more use of industry standards and reduction of costs overall.”

That was nearly six years ago already.  Since 2010, Cisco has accumulated a list of customers that adopted FCoE, including Coca-Cola Bottling Co. of Charlotte, North Carolina, Boeing, the Commonwealth of Massachusetts, and Texas University.  Unquestionably, convergence at this level is indeed happening for some firms.

While there’s little dispute over Cisco’s assertions of the basic requirements for FCoE-based LAN/SAN convergence to come to fruition, the question now is whether, at long last, the maturity of the technology delivering those requirements has reached critical mass.