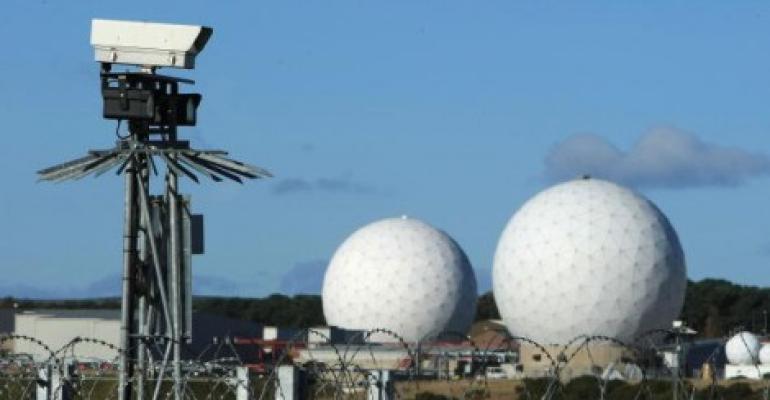 Radar domes of RAF Menwith Hill in North Yorkshire dominate the skyline in October 2007 in Harrogate, England. The base is reported to be the biggest spy base in the world. Britain recently agreed to a United States request for the RAF Menwith Hill monitoring station, also known as the 13th field station of the US National Security Agency. in North Yorkshire to be used as part of its missile defence system, Dubbed &#8216;Star War Bases&#8217; by anti-war and CND campaigners. The base houses British and United States personnel. (Photo by Christopher Furlong/Getty Images)
Manage

The Intercept: There’s an NSA Data Center in the UK

Technology has always played an inextricable role in spying, and today, that means one or more data centers underpin any spying operation.

It comes as no surprise that a US surveillance outpost in the UK has a data center, as revealed by a story published last month by The Intercept, the aggressively anti-NSA investigative online magazine published by First Look Media. The story reveals an unprecedented amount of detail about the activities taking place at Menwith Hill Station, relying on classified US government documents leaked by former NSA contractor Edward Snowden.

Glenn Greenwald, one of The Intercept’s founding editors, was one of the key journalists who wrote the first series of stories based on the Snowden leaks in 2013. Greenwald wrote his for The Guardian.

Menwith Hill Station in North Yorkshire is the largest base NSA spies have built outside of the US. The facility’s scope has widened from its original purpose of monitoring Soviet communications during the Cold War to playing a key role in the NSA’s global surveillance network.

The 10,000-square foot data center was built between 2009 and 2012 as part of a new $40 million operations building at the base, according to The Intercept. No further details have been revealed about the server farm, other than its purpose of storing and analyzing data collected through intercepted communications.

Its size pales in comparison with the massive NSA data center in Bluffdale, Utah, which became a focus of public outrage following the original Snowden leaks, and the agency’s newer, $860 million data center in Maryland.

The Intercept’s latest story talks little about the infrastructure at Menwith Hill, however. Its thrust is the nature of activities at the outpost -- whose legality it questions -- and the UK government’s potential complicity in those activities.

The station’s primary role appears to be monitoring global satellite communications. It has been instrumental in the US government’s anti-terrorism activities in North Africa and the Middle East, where cable infrastructure is scarce and much of the population relies on satellites for internet connectivity.

The site questions the legality of using equipment at the station to locate targets in Yemen, Pakistan, and Somalia, with whom US isn’t officially at war, to help drone pilots kill enemy operatives. The US drone program has come under criticism for civilian casualties it has reportedly caused in addition to killing actual enemy targets.

Read the story in full at The Intercept.