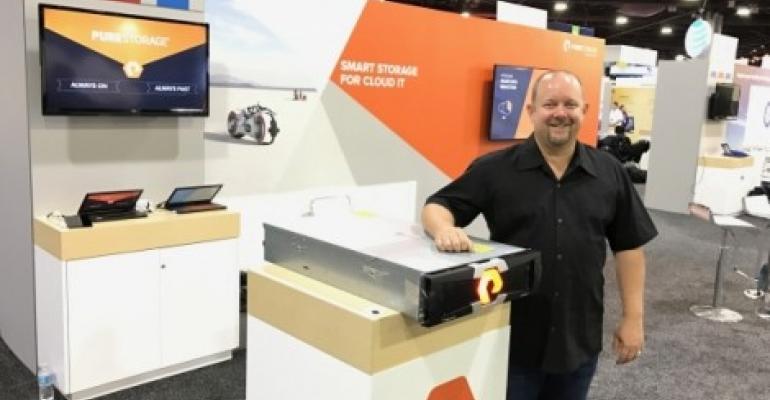 With More Data Than Ever to Manage, Storage Gets Smarter

Focusing on integrations and automation, Pure Storage wants to help IT do more

When Rob Barkz Barker first started at Pure Storage, he says the conversations were all about one thing: Performance. With a laser-focus on flash memory, that was a conversation that helped Pure crack the market.

But after performance is handled, the conversations have changed: Now, his customers want to find out how to automate routine tasks and spend more time thinking about how to drive their organizations forward.

I rarely go into a customer nowadays that has a performance pain point, because it's been solved with Pure's all-flash architecture, Barkz said at Microsoft Ignite. Now, his customers are excited about what value the platform can bring.

Barkz has been heavily focused on that platform, particularly with scripting tools that allow them to automate the more tedious processes while focusing on more strategic goals.

And to make it easier for anyone to get up to speed, Pure Storage now offers both PowerShell (just updated this week) and Python scripting for its storage solutions.

If you look at customers, about half use PowerShell, and the other half use Linux and Python, he said, noting that Microsoft was helping lead the way. Microsoft's embracing Linux, and recently putting out the first builds of PowerShell on Linux, and that's a really exciting thing. They're helping to build the gap between, 'I'm a PowerShell guy, I'm a Python guy' — not anymore. The landscape of how people can work on multiple platforms has been broadened.

That's particularly important, Barkz said, as IT professionals are increasingly expected to be able to cross easily between domains.

We're also seeing consolidation of roles in organizations, said Barkz. We're having people who can do networking, storage, the administration aspects, and provide more value to the business, instead of asking, 'What fire am I going to fight today because of my storage or network?'

This is particularly true with DevOps teams that are working to stay agile and bridge the divide between cloud and on premise, or teams that have seen the convenience of the cloud but want the security or cost management of on-premise.

That's easier than ever. Particularly since Microsoft has enabled hybrid cloud solutions with Azure ExpressRoute, enabling enterprises to build their own cloud with Azure and customer owned own hardware, which PureStorage moved to support earlier this year.

Pure Storage is giving the dream of private cloud in the enterprise, with ability to consolidate all apps, automate activities, and provide self service, said Barkz.

Easier self-service offerings also means that internal teams are less likely to go outside of IT to have their compute needs met.

One of biggest challenges from DevOps is that in the past, IT hasn't been rapid enough in responding to their needs, so they go shadow IT, put it on their credit card, and go directly to Amazon, said Barkz. In some cases, the enterprise doesn't even know that they're out there in the cloud.

These latest evolutions help put IT back in charge, more nimble than ever.

This first ran at http://windowsitpro.com/cloud/more-data-ever-manage-storage-gets-smarter