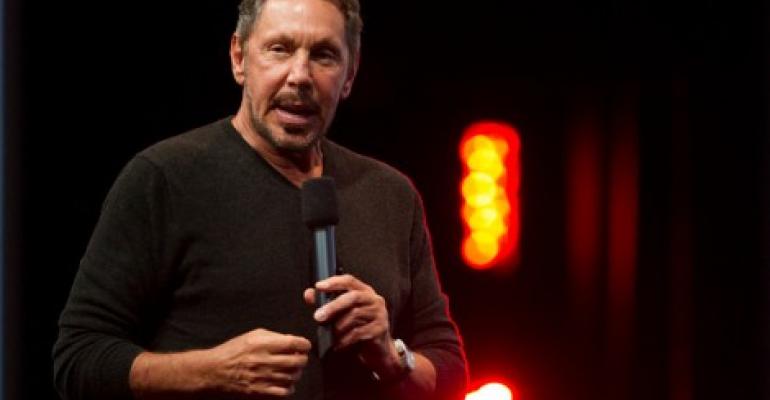 The three executives were among the 20 highest-paid in the U.S. last year.

(Bloomberg) -- Oracle Corp., which has faced shareholder opposition to its compensation practices, cut pay for its top executives in 2016.

Co-founder and chairman Larry Ellison received $41.5 million, a 35 percent decrease from last year. Co-Chief Executive Officers Safra Catz and Mark Hurd each received about $41 million, a 23 percent decline. The drop for the co-CEOs is accentuated by one-time stock awards valued at $9 million that they received when they were promoted at the end of 2014.

The three executives were among the 20 highest-paid in the U.S. last year, according to the Bloomberg Pay Index, which values equity awards at fiscal year end, continuing a trend of generous pay for Oracle’s bosses. More than half of the company’s investors have voted against its pay practices in each of the last four years, making the company an outlier. About 1 percent of Standard & Poor’s 500 companies have lost in their most recent non-binding votes, and the average support level is 93 percent, data compiled by Bloomberg show.

Catz and Hurd received the same number of annual stock awards that they did last year. Ellison’s awards were reduced to a level commensurate with the co-CEOs’. The executives failed to earn their cash bonuses, which could have been worth as much as $15 million, after missing profit targets.

Redwood City, California-based Oracle paid $1.5 million in security-related costs and expenses for Ellison and $176,156 in security for Hurd. Catz “was offered a security system paid for by Oracle but opted instead to maintain the existing security system at her residence,” according to the filing.

Ellison increased the amount of Oracle stock pledged against personal indebtedness and lines of credit to $12.4 billion, or 315 million shares, an increase of 15 million over last year’s figure. He has a net worth of $43.1 billion, according to the Bloomberg Billionaires Index.

Oracle filed a presentation to the U.S. Securities and Exchange Commission earlier this month that highlighted changes to its compensation practices. The company has reduced the number of stock options it pays executives and began paying stock awards that are tied to performance goals in 2015. It also cut in half the period of time executives have to exercise options to five years.