The company may benefit from accelerated move to the cloud as a result of the UK vote to leave the EU.

Who would have thought that a Brexit vote might actually contain a silver lining for Interxion Holdings?

Businesses tend to be risk-averse, and the UK's unprecedented vote to leave the European Union is generally viewed as having a dampening effect on business decision making. Interxion derives 100 percent of revenues from the UK and Europe, and delays in contract signings or capital expenditures could negatively impact these economics.

This is less of an issue for larger US-based rivals, such as Equinix and Digital Realty Trust, than for Interxion. However, Brexit may actually turn out to be a good thing for the Amsterdam-based firm.

Joshi shared his views on Brexit, the changing competitive environment in Europe for data center operators, and how cloud adoption by enterprise customers in Europe still lags North America.

The conventional wisdom is Brexit injected uncertainty into the markets and will slow decision making.  Strategic planning for corporations based in the UK and EU has been complicated and will delay corporate spending.

Joshi implied it was more of a mixed bag for the European data center market, saying "…several years of uncertainty will dampen activity, but the floor hasn't fallen out of business by any means, including the London market."

Just today, the company announced it was expanding data center capacity in three European markets: Frankfurt, Marseilles, and Paris. In Frankfurt, it is building a new data center, which will be called FRA11, while the two projects in France are expansions on existing sites.

The immediate negative impact from Brexit for Interxion was the devaluation of the GBP versus the Euro. It caused an immediate headwind of 4 euros per square meter, or ~1% decrease in average MRR per cabinet in Q2 2016, versus previous guidance.

However, Brexit could actually benefit Interxion in a couple of different ways:

Interxion is well-positioned to benefit from any acceleration of enterprise cloud adoption in Europe. However, it has been slow going to date. According to Joshi, adoption of outsourced IT solutions and cloud computing by European enterprise customers is two years behind the pace of cloud adoption by US corporations: 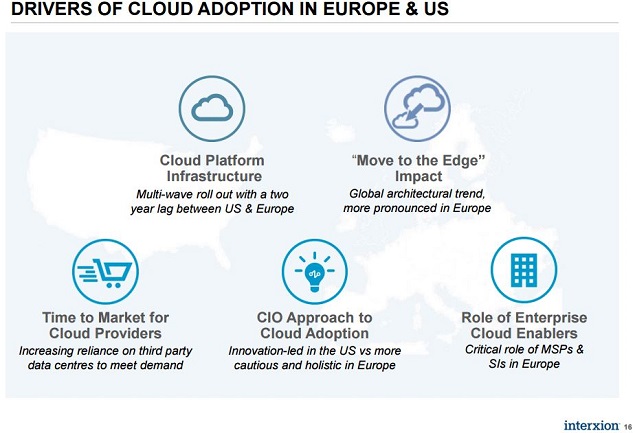 Interxion is currently seeing enterprise R&D and trial cloud deployments, but it has yet to see many "material" enterprise deployments.

Joshi predicts "waves of deployments," which will be occurring over multiple years, with smaller countries still lagging behind the larger markets in cloud adoption. 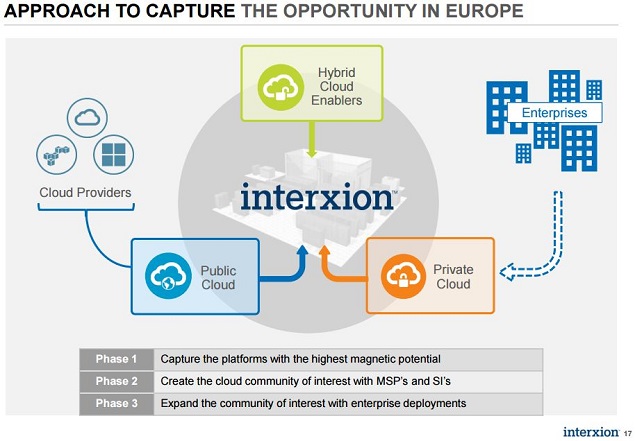 Interxion is laying the foundation for enterprise by leasing to "Hybrid Cloud Enablers" to create an attractive platform for future enterprise cloud adoption.

The company derives 65 percent of revenues from the "Big Four" European countries: Netherlands, Germany, France, and the UK. The balance comes from serving the rest of Europe. In some markets Interxion is the only pan-European data center provider, and overall margins in secondary markets are approaching 58 percent.

The company is well-positioned in smaller countries and "edge" markets compared with its larger US-based competitors, according to Joshi. He said the Nordic countries were "bright stars" with strong tech markets and used Copenhagen as an example, where Interxion's latest 600-square meter data hall expansion was 100 percent leased.

In Marseilles, there are two new subsea cables terminating within the existing Interxion data center. It was designed to be 6,000 square meters at full build-out, and the company has already leased another property from the Marseilles port authority. Marseilles is a cloud nexus supporting data flow between the South of France, North Africa, and the Middle East.

Joshi pointed out Austria as another market which serves as an Interxion cloud gateway to Eastern and Central Europe.

During the past year there has been a major shake-up and consolidation of data center providers serving the UK and Europe. Regarding further potential consolidation involving Interxion, Joshi implied that nothing was off the table. He referred to any potential M&A deal as the "art of the possible," but stated clearly that Interxion remains focused on "creating long-term sustainable value."

The Equinix acquisition of TelecityGroup had the unintended consequence of expanding another US-based data center provider in Europe: Digital Realty, which acquired a number of Equinix data centers in the region it was forced to sell in exchange for regulatory approval of its Telecity merger. It was still too early in the game for Joshi to determine if there will be any competitive changes from Digital gaining a retail colocation footprint in three of the Big Four markets.

Joshi made the point that Interxion is still competing against the same data centers, and pointed out that Digital Realty and Equinix will likely to be more disciplined in allocating capital than TelecityGroup was previously in many markets.

He did not discuss the potential impact of EdgeConneX entering the European market.

Comcast Ventures-backed EdgeConneX has begun constructing large-scale projects in Amsterdam, adjacent to the large Interxion campus near Schiphol airport. There are also mega-scale EdgeConneX projects underway outside of Dublin and London.

Additionally, EdgeConneX has said that it intends to roll out smaller "edge" data centers in markets across Europe, initially to support the efforts of Liberty Global, which is also an investor.

It remains to be seen if EdgeConneX will become a significant competitor to Interxion, an incumbent with deep roots and a home field advantage.

One vertical market where EdgeConneX could quickly become disruptive would be digital media and content distribution networks (CDNs). Notably, Akamai is another investor in EdgeConneX, and Netflix recently announced an alliance with Liberty Global in Europe. Both of these content giants are currently Interxion customers. In aggregate, content and digital media currently account for 10 percent of revenues for Interxion.

Update: The article has been updated with news of Interxion's expansion in Germany and France.