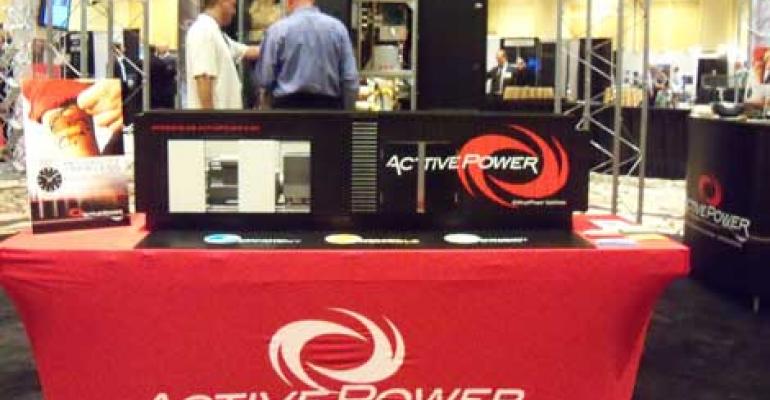 Active Power, an electrical infrastructure vendor that specializes in data center UPS systems that rely on flywheels instead of batteries for energy storage, has introduced a system with much longer runtime than an older model, addressing the biggest problem that prevented it from selling to some of the largest data center operators – internet and cloud giants as well as some of the biggest colocation providers.

By spinning the flywheel faster, Active Power has increased its UPS runtime by 78 percent under certain conditions. Running at full load, the runtime has gone from 15 to 25 seconds, while at partial load (40 to 50 percent, which is the range most data center operators run their UPS systems in) the runtime has been extended to nearly one minute, Anderson Hungria, Active Power’s senior product manager UPS, said in an interview.

Flywheel-based UPS systems are more environmentally friendly than battery-based ones, but short runtime has prevented them from being widely deployed in data centers.

One of Active Power’s largest-scale customer is Yahoo, which installed the flywheel-powered UPS in its Yahoo Computing Coop data centers. But the vendor has had a hard time convincing other hyperscale data center operators, who are uncomfortable with the short runtime.

For example, one large cloud provider Active Power has spoken with needed 35 seconds, Todd Kiehn, VP marketing and modular infrastructure solutions, said. “We were unable to get there economically with the prior generation of product.”

Yahoo needed 18 to 20 seconds of runtime, Hungria said, and Active Power was able to get there by lowering the load on individual UPS units deployed at Yahoo data centers.

Kiehn expects the new CleanSource 275XT product and the runtime headroom it provides will enable the vendor to get to more large-scale customers without having them lower the UPS load. Running electrical equipment at lower loads usually translates to low energy efficiency and low capital efficiency, because you’re paying for capacity you aren’t using.

The company’s engineers extended the runtime by spinning the flywheel at 10,000 revolutions per minute instead of 7,700 RPM, Hungria said. Key to this year-and-a-half-long engineering project was the work they had done on Active Power’s CleanSource HD UPS, which combined a flywheel with batteries to extend runtime. They “leveraged a lot of the CleanSource HD electronics and design and imported that into the smaller platform to create 275XT,” he said.

Another capability Active Power hopes will make its new data center UPS more attractive for cloud providers is hooking up multiple units to work in parallel to increase capacity and/or redundancy. Its predecessor, CleanSource 300, was a stand-alone unit.

The company has kept the cost of the unit the same as the preceding model: $80,000 per flywheel, according to Hungria.

The Race to One Minute

These three characteristics – runtime, capacity, and cost – are what all UPS vendors constantly work to balance against each other. Higher capacity means higher runtime but also costs more, so companies selling systems powered by led acid batteries have been working to lower their runtime to bring the cost down; but they can only lower it so much before they don’t have enough capacity to deliver the load, Hungria explained.

Demand in the data center UPS market today is trending toward shorter runtimes, and Active Power and its competitors are all racing toward 1 minute runtime, which appears to be the sweet spot. “It’s’ getting to a point where 1 minute is where most end users are comfortable with,” Hungria said.

Active Power is racing to this sweet spot from the bottom, while battery-based UPS vendors, whose typical runtimes are four to five minutes, are racing to it from the top.