The edge data center provider is more than just another niche player and is already a much larger enterprise than probably most investors realize.

In both hockey and investing, it's important to skate where the puck is heading.

It might seem counter-intuitive that a private data center company building in secondary markets could impact future earnings for the big publicly held data center REITs, but it appears there are some game-changing developments underway.

EdgeConneX is a portfolio company of Comcast Ventures; its other investors include: Charter Communications, Akamai, Cox Communications, and Ciena, as well as private equity firms Brown Brothers Harriman and Providence Equity Partners.

It continues to construct and expand a network of new "skating rinks" (edge data centers) where cable, content, and cloud providers are collocating servers to improve the quality of service in local markets.

In addition to providing lower latency for high-performance applications, EdgeConneX offers US customers a distributed wholesale pricing model, which can make it cheaper to locate servers closer to the "eyeballs," or network edge.

In a nutshell, the EdgeConneX one-two punch of improved network performance at a lower price point could win a lot of market share from incumbent data center providers.

Wholesale Pricing: The provider offers a basic colocation contract charging $150 to $235 per kW per month (depending on redundancy and market). There is no administrative fee on contracted power usage. There is no charge for floor space occupied by IT cabinets.

Cross-Connects: There is a $200 non-recurring set-up fee for running the fiber. The monthly recurring fee is $100 per "lit" pair, with no charge for unused connections. This pricing is posted on the EdgeConneX website along with its OPEN-IX certifications.

It is not unusual for US data center providers to charge $300-$500 for installation and up to $300 for monthly recurring fees per cross-connect, lit or not.

Lease Term: The typical EdgeConneX lease contract with anchors is for an initial term of 7 to 15 years, "with a bias toward the longer side," according to Phill Lawson-Shanks, EdgeConneX chief architect and VP of innovation.

Additionally, EdgeConneX tenants can monitor all data center locations in real-time on a single dashboard with visibility down to the equipment level, including power usage, temperatures and humidity.

EdgeConneX's network of 25 data centers build across 24 US markets simply did not exist two years ago, which makes this company one of the fastest-growing data center providers.

It is far more than just a landlord. It essentially has become a design-build partner creating new internet peering points in data centers located where anchor tenants can provide the lowest-latency video and other content to customers in edge markets. 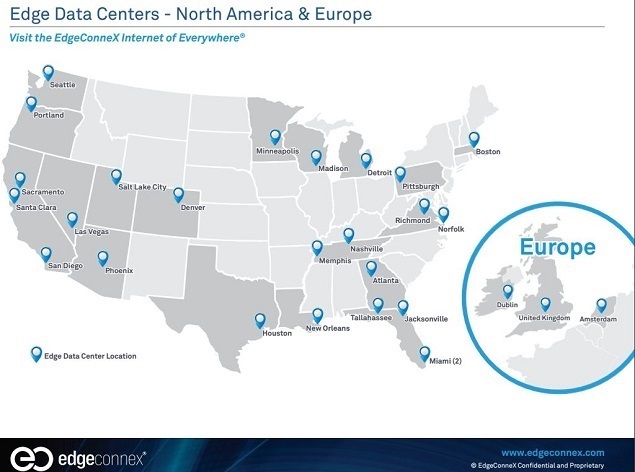 Each location opens already seeded with content providers, CDNs, ISPs, networks, as well as cloud and managed services providers. This helps to accelerate the evolution of the content and cloud supply chain, or ecosystem.

Most notably, EdgeConneX does not build data center facilities speculatively. In fact, each one that opens is immediately EBITDA-positive, according to management.

The company's speed to market is enhanced by its proprietary RIO (real estate inventory online) software. RIO is a site acquisition tool, which maps over 40,000 building locations nationwide in relation to fiber aggregation points, and fiber network routes by provider, in each US market.

Selection of an ideally located existing building to purchase, gut, and remodel in a new market generally takes a week or less. The delivery of a purpose-built data center designed to support 600 watts per square foot, with minimum N+1 redundancy, takes four to six months depending upon length of time required for permitting.

Here's a time-lapse construction video which shows how EdgeConneX's Boston EDCBOS01 facility was built in just 102 days, despite a severe winter storm:

In 2016, EdgeConneX has now upped the ante by rolling out high-speed on-ramps for Amazon Web Services, Microsoft Azure and Google Cloud.

Access to the Big Three cloud providers is also available in Detroit, where EdgeConneX has partnered with Console to provide scalable, private, direct connections for customers. EdgeConneX also offers colocation space for managed services companies and system integrators which can facilitate enterprise hybrid cloud deployments at these cloud-enabled locations.

In January 2016, EdgeConneX announced that its first European expansion would be in Amsterdam, and subsequently revealed two additional projects located near Dublin and London.

EdgeConneX plans to roll-out a similar network of smaller edge data centers in secondary cities across the UK and Europe to provide low-latency alternatives for an ecosystem of tenants, anchored by media giant Liberty Global.

EdgeConneX prefers to own its data center infrastructure rather than to lease facilities from other landlords. This requires a lot of capital investment, but clearly Comcast and other venture partners have deep pockets.

In 2013, the first EdgeConneX data center location was built in a leased facility in Katy, TX outside of Houston. Fast-forward to 2016, and EdgeConneX recently purchased StratITsphere, the small wholesale data center provider which owned that facility, in order to control that property.

This purchase underscores the importance which EdgeConneX places on owning its fleet of data centers -- an approach which makes sense given the long-term contracts which key customers are signing.

This early in the game it remains unclear just how much of a threat the evolving EdgeConneX business model may pose to incumbent data center landlords.

One risk is that large numbers of servers deployed in multiple edge markets will slow the rate of growth in core US data center markets over time -- especially for media firms and content providers. Additionally, the EdgeConneX pricing plan could become a revenue headwind for incumbents who are located upstream, in larger data center markets.

EdgeConneX is certainly more than just another niche player in secondary US markets and is already a much larger enterprise than probably most investors realize. Some back-of-the-envelope math indicates that the company could soon generate revenues rivaling some of the smaller publicly traded data center REITs.

My main takeaway is EdgeConneX is a fast-growing, disruptive data center player that investors in publicly traded data center REITs should be aware of and watch very closely.