When EdgeConneX, the company that has positioned itself as a specialist in building and operating edge data centers, announced its first project in Europe early this year -- a data center in Amsterdam -- the move appeared to be little more than a cautious and relatively small first step into a new market by the Herndon, Virginia-based data center provider.

The company did say at the time it had plans to replicate its US model in Europe and go into many more European markets, but it didn't say exactly how fast it would do it and wasn't specific about the scale of its European expansion. Turns out, it is stepping into multiple key European data center markets all at once, already building data centers at massive scale.

It has mega-scale data center projects underway in Amsterdam, Dublin, and London. These facilities are build-to-suit projects designed together with anchor tenants but sized to support a multi-tenant enterprise-focused colocation business.

EdgeConneX is known in the US for operating a big network of smaller, purpose-built facilities offering low-latency solutions for content distribution in secondary, or edge data center markets. It builds data centers in places with many digital-content end users that are underserved by incumbent data center providers. In those facilities, content companies like Netflix or Google cache their content, while local internet service providers deliver it to the end users.

Not surprisingly, some of its biggest financial backers are media, cable, telecommunications, and content delivery network companies. EdgeConneX is a portfolio company of Comcast Ventures, and other investors include: Charter Communications, Akamai, Cox Communications, and Ciena, as well as private equity firms Brown Brothers Harriman and Providence Equity Partners. 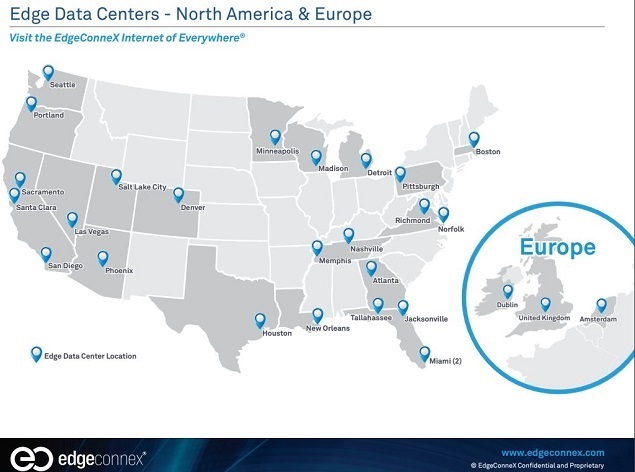 Big Plays in Dublin and Amsterdam

The initial three buildings in Amsterdam were designed to draw a 55MW critical load at full build-out, Phill Lawson-Shanks, EdgeConneX chief architect and VP of innovation, told Data Center Knowledge in an interview. Additionally, the company has reserved another 20MW of future capacity from the incumbent electric utility to support the planned development program through 2019.

In a story similar to the data center landgrab by cloud giants in the US, a hyperscale cloud company, whom Lawson-Shanks could not name due to confidentiality agreements, selected EdgeConneX to build a large-scale data center adjacent to Grange Castle Business Park near Dublin, Ireland, where Microsoft has a data center. Besides Microsoft, cloud giants Amazon, Apple, Google, and Facebook are all active in Dublin.

Speed to market is critical for EdgeConneX's anchor customer in Dublin, and the data center provider has been delivering its larger European facilities in about nine months.

Unlike Amsterdam, where existing buildings are being renovated and upgraded, the Dublin project is a ground-up build. EdgeConneX is using a modular approach with key electrical and structural components fabricated off-site and delivered by truck to accelerate the building schedule.

The first building in Dublin is drawing 10MW from the national grid plus 8MW from natural-gas turbines, which are supplementing its power supply while the utility company is building out more infrastructure to support it, Lawson-Shanks said.

This will allow EdgeConneX to bring the data center online to meet the requirements of the anchor tenant.

Another massive-scale European data center project by EdgeConneX is underway outside of London. Liberty Global, the corporate parent of Virgin Media, will be the anchor tenant there as well as in a network of smaller EdgeConneX data centers elsewhere in the UK.

Liberty is the world’s largest international TV and broadband company with operations in more than 30 countries across Europe, Latin America. and the Caribbean.

Earlier this year it completed the acquisition of Cable & Wireless to augment its Latin America and Caribbean business. It is also currently going through the process of launching a joint venture in Holland with Vodafone.

Liberty serves markets in over 20 countries in Latin America and the Caribbean under the consumer brands VTR, Flow, Liberty, Mas Movil, and BTC. The LiLAC Group (the collective name for Liberty's Latin America and Caribbean operations) also operates a submarine fiber network in more than 30 markets throughout the region.

While it has so far stayed largely out of their way in the US by building in secondary markets, EdgeConneX is becoming a serious competitor to the big data center providers in Europe.

Like the big providers, it is pitching its facilities as cloud on-ramps for enterprises, and it is building close to where they are.

In a recent interview with Telecom Ramblings, EdgeConneX's chief commercial officer, Clint Heiden, said the first phase of its Amsterdam facility would be 8MW and that the two following phases, which were "mostly sold out," would be larger.

Its Amsterdam campus is located within 24 km from downtown Amsterdam and 9 km from Schiphol Amsterdam Airport.

These new EdgeConneX facilities are located very close to the corporate headquarters of Amsterdam-based Interxion, one of the biggest European data center providers, and four of its Amsterdam data centers. Interxion is currently completing the construction of AMS8 adjacent to its exiting campus.

Along with InterXion, the two largest US-based data center REITs, Equinix and Digital Realty Trust, also own and operate significant data center assets in Amsterdam, London, and elsewhere around Europe.