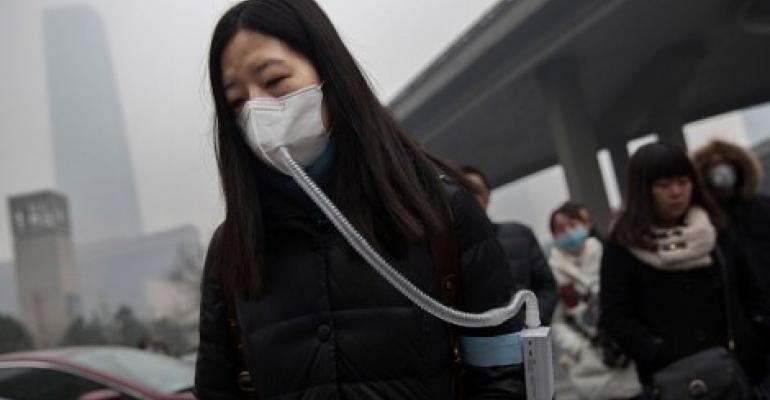 A Chinese woman wears a mask and filter as she walks to work during heavy pollution on December 9, 2015 in Beijing, China. (Photo by Kevin Frayer/Getty Images)
Design

A recent push by the Chinese government to clean up the environmental footprint of the country’s rapidly growing data center industry is focused on two fronts: energy efficiency and renewable energy.

While there are no national-level data center efficiency regulations yet, the City of Beijing, one of the world’s most polluted cities, recently issued an outright ban on data centers whose Power Usage Effectiveness, or PUE, is above 1.5, according to a report in Environment 360, a Yale School of Forestry and Environmental Studies publication.

There are no official statistics on the total number of data centers in China, but the government estimates that the country’s data centers consume more energy than Hungary and Greece combined.

About 675 million people, or half of China’s population, were connected to the internet in 2014, according to Internet Live Stats. For the sake of comparison, about 280 million internet users lived in the US that year, while the country’s internet penetration was 87 percent.

A recent US government study estimated that all data centers in the US consumed about 70 billion kilowatt-hours of electricity in 2014. Growth in the industry’s total energy consumption has slowed down substantially since 2010, which was due primarily to data center efficiency improvements.

Most data centers in China are grossly inefficient, operating at PUE of 2.2, according to Environment 360. An official with the Beijing-based China Green Data Center Advancing Federation told the publication that some companies have already left the city because of its PUE restrictions.

Perhaps the biggest national-level data center energy program in China is the green data center pilot program by the Ministry of Industry and Information Technology. The program enlists companies that are building data centers with innovative energy efficiency design features and serves as a hub for information sharing and establishment of data center efficiency and environmental standards.