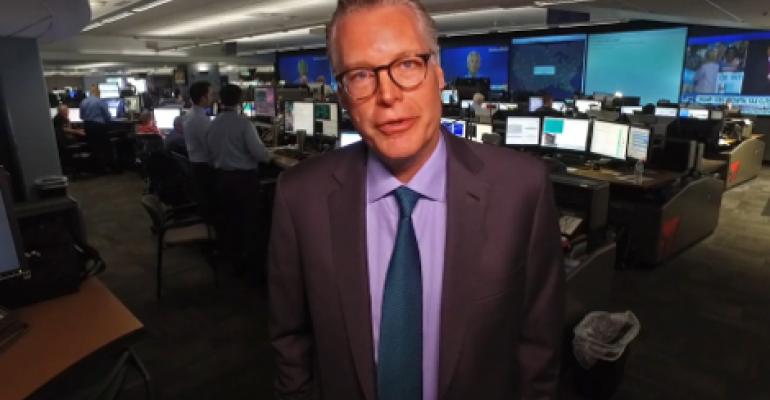 Delta Airlines hasn’t yet explained what exactly caused its data center outage in Atlanta this morning, which led the carrier to cancel hundreds of flights scheduled for the day.

It said a power outage “impacted Delta computer systems and operations worldwide,” but a spokesman for the utility whose service territory includes the Atlanta site told the Wall Street Journal that there were no power outages in its territory on Sunday evening or Monday. The utility, Georgia Power, did dispatch some workers to the data center to help Delta fix a problem with switch gear early Monday morning, the spokesman said.

Delta has been posting regular updates on the incident and flight cancellations and delays. The last update, posted at 1:30 p.m. ET, said 451 flights had been cancelled due to the power outage, and 1,679 of the 6,000 or so scheduled for today were being operated so far.

Ed Bastian, the airline's CEO, apologized for the incident in a video posted on the company's website.

While the immediate impact of any data center outage is disruption of business and its customers, there is also the longer-term cost impact. For a data center service provider, the bulk of that cost may be compensation to customers for not delivering on service level agreements. The cost of data center outages for airlines is somewhat similar: Delta customers are entitled to refunds for flights that are cancelled or significantly delayed.

Come listen to the 15-year manager of infrastructure and operations for the University of Kansas share data center outage stories at Data Center World in the "Taming the Data Center: A Wildcat's Experience" session on Thursday, Sept. 15 from 8 a.m.-9 a.m.

It’s difficult to calculate the total cost of data center outages, and they vary widely depending on the nature of the business. Emerson Network Power has been funding periodic surveys by the Ponemon Institute that attempt to quantify and track average costs of data center outages across different business verticals.

According to the most recent survey, the average cost of a single data center outage in 2015 was $740,000. The most expensive reported outage last year was about $2.4 million.

While problems with electrical infrastructure have for many years remained the most common cause of data center outages, the number of outages caused by cybercrime is now rising more quickly than any other type, according to Ponemon.

Airlines grounding flights as a result of data center outages is a fairly regular occurrence. In January, a power outage at a Verizon data center caused flight delays for customers of JetBlue, which was hosting infrastructure at the facility. Last year, United Airlines grounded flights for about an hour, attributing the disruption to network connectivity issues.