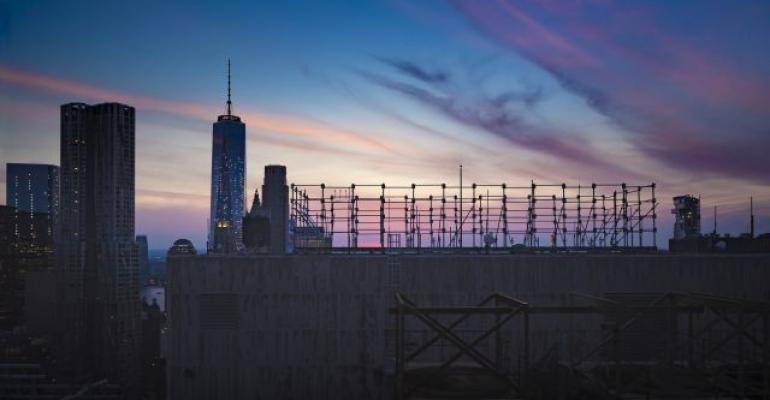 Almost a century ago, it was the very symbol of technology and ingenuity: the giant transmitter tower beaming signals into the heavens.  The crown jewel of the Empire State Building has always been an antenna.

Today, we’ve renewed the word “wireless” into the common vernacular; no longer does it sound antiquated, like “microcomputer,” “Hayes modem,” or “MTV music video.”  And in the latest signal that everything old is new again, the biggest news in New York City data centers this week may be the completion of a very large antenna complex.

Its apex extends to 560 feet over lower Manhattan, at the crest of what had been one of the city’s uglier properties, at 375 Pearl Street, at the foot of the Brooklyn Bridge.  It’s still known to locals as the Verizon Building, and was once known as the One Brooklyn Bridge Plaza.

The Verizon Building in Lower Manhattan in 2011.

Today, it’s Intergate.Manhattan, complete with the funky re-spelling of “integrate” and the dot.  And beginning this year, the limestone-clad tower is getting a resurfacing.  Plus, its current principal owner, Sabey Data Center Properties, is taking full advantage of its nearly unobstructed location.  It's constructed some 300 positions (a few of which are already taken) for customers to position 360-degree vantage point antennas, providing line-of-sight, wireless data center access to the boroughs, the financial district, and mid-town Manhattan.

In Sight, It Must Be Right

“As you look at the wireless market, and you look at Manhattan,” said Dan Meltzer, Sabey’s vice president for sales and leasing, speaking with Datacenter Knowledge, “you realize it’s a very small space.  But with line-of-sight, you actually extend your market.  So you’re able to hit Brooklyn, Queens — any area of Manhattan, north, south, east, and west.  And if you have height, you can hit points in New Jersey along the Hudson River.”

Sabey has housed and managed data centers in the Intergate building for clients since the start of the decade.  What the antenna adds — for many Manhattan customers, for the very first time — is an alternative mode of access for carrier-grade connectivity.  Whichever wired carrier happens to serve a business on the island, will at some point connect with Verizon (the former Bell Atlantic, which had been NYNEX and New York Telephone Co. prior to that).

This way, their own customers have a way to bypass — quite ironically — the service provided by the telco whose name still adorns the Intergate building.

Brooklyn Fiber, explained Sabey’s Director of Leasing George Panagiotou drives down the cost of broadband with lower-cost, gigabit access for businesses.  It started out doing business not in Brooklyn itself but in the village of Red Hook, about an hour’s drive north on Broadway from lower Manhattan (on a good day).  Sabey’s line-of-sight antenna will now open up new avenues for potential Brooklyn Fiber customers further south.

The Other Way ‘Round

An artist's rendering of the final state of the Intergate.Manhattan building.

While line-of-sight may not necessarily be customers’ principal means of broadband connectivity, Sabey’s tower gives them the option of a redundant or bypass connection, explained Panagiotou,.  This way, Brooklyn Fiber and others can offer wireless ISP service for businesses that need more 9s on their SLAs.

“They eliminate what would be the cost of delivering fiber to individual buildings,” he told us, “where they will make agreements with landlords whose tenants are interested in getting high speed Internet bandwidth.  They will put antennas on those buildings, and we’ll serve them from 375 Pearl Street.  They’ll distribute that bandwidth to tenants inside the buildings, instead of trying to get one of the traditional carriers to pull in some fiber from the street — which would be unlikely, if the investment isn’t going to justify what kind of revenue they could generate from those types of buildings.”

In other words, just like early television transmitters changed the property values of business that were the first on the block to open their doors to viewers, line-of-sight connectivity could elevate the stature of business districts that suffer today from the logistical nightmares of obtaining high-bandwidth data service.

Many buildings in Manhattan can only be served by Verizon.  And even when there are multiple providers for a property, explained Panagiotou, there are probably a handful of aggregation points — and potential points of failure — where the alternative providers connect with Verizon’s infrastructure.

“So even if you were to get more than one traditional fiber or copper service,” he said, “you’re still going to be hitting stuff that’s going to be in one manhole, one central office, or some other single point of failure.  By going with a provider like Brooklyn Fiber or NuVisions, you can get wireless redundancy so that, if ConEd or someone else is down in the street, digging up sidewalks, and they accidentally rip out all the copper or fiber that’s going into one point of entry on the building. . . for customers who are truly mission-critical and want no chance of going down, they will be able to fail over to that wireless access from 375 Pearl Street.”

Of course, in the concrete jungle, not everyone can see this particular tower from where they stand.  Some tenants, Panagiotou told us, have the means to triangulate a signal, relaying it from Intergate, around obstructions, and into receiving stations in Brooklyn.

Meltzer said that Sabey operates a meet-me room on the sixth floor of Intergate, where tenants have the option of connecting with the providers of their choice.

From here, Sabey is looking for opportunities to host temporary broadband access facilities for the city’s major events — conventions, sports, and outdoor gatherings.  So far, said Meltzer, only a fraction of the 300 antenna positions have been staked out on the antenna — which may yet convert an old, grey box into the pearl of Manhattan.

[NOTE: This draft was slightly revised, to make clearer that Sabey has constructed 300 antenna positions atop the Intergate.Manhattan complex.]

Image of 375 Pearl Street in 2011 by Beyond My Ken, licensed through Creative Commons.  Title image and artist’s rendering of refinished building, both courtesy Sabey Data Center Properties.  Title image by John Neitzel.