HPE Cloud, Storage Chiefs Out in Another Strategy Shift

An HPE corporate blog post Monday, with the benign sounding headline, “Sharpening our Focus in Hybrid IT, Global Sales, & Storage,” announced a corporate re-alignment that leaves two of its most outspoken executives out of the company.

Bill Hilf, formerly HPE’s senior vice president and general manager for cloud [pictured above], is “leaving HPE to pursue other opportunities,” reads the post, attributed to the executive vice president of the Enterprise Group at Hewlett Packard Enterprise, Antonio Neri.  The same fate is ascribed to Manish Goel, formerly the senior vice president for HPE Storage.  The post does not say whether they left entirely of their own volition, nor does it apply the typical courtesy of wishing them well.

HPE’s Helion CloudSystem Group and its OpenStack Group are being merged, to form a single Software-Defined and Cloud Group, Neri writes.  Ric Lewis, previously SVP/GM for data center infrastructure, will head this new group.  Regular readers of Datacenter Knowledge will recall Lewis’ contributed post last March, in which he re-cast his company’s “composable infrastructure” strategy as an integration play.

It was last October, at the HPE Discover conference in London, where Bill Hilf made the strongest demonstration to date in favor of a data center management strategy that was focused on workload orchestration.  At his side were the head of HPE’s Enterprise Services unit, and the Microsoft general manager in charge of cloud.  The three were announcing a partnership which made Azure HPE’s preferred public cloud partner, effectively replacing its own attempt at a public service, the original Helion.  (Microsoft had been Hilf’s previous employer before HPE.)

“We exited the HP public cloud specifically because we were led to believe there was a lot more growth in the market,” Hilf told me at that conference, “and could participate in more growth by partnering with, in many cases, the classic partners that we had for years, as that market expanded from the drive to hybrid.  What hybrid really means is, there’s a much broader ecosystem for cloud computing.”

But seven months later, HPE opted to spin off its Enterprise Services unit, where it would be absorbed by CSC.  Gone was the strategy that would see HPE and Microsoft effectively sharing partners, and aligning their hybrid cloud platforms, potentially enabling composable infrastructure to link to compute and storage capacities from Azure.

Hilf’s role at the company’s next conference in Las Vegas the following June also appeared to be toned down.  Yet it was Manish Goel who, in a meeting with reporters that also included Ric Lewis, defended the Microsoft partnership strategy, including with respect to questions about Microsoft’s intentions for Azure Stack.  At that time, it appeared Microsoft would be agnostic about the makes and models of private servers on which Azure Stack would be installed. 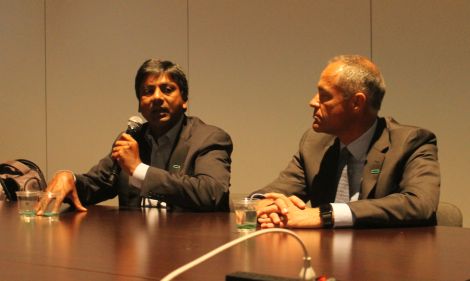 “In my view — one guy’s view — public cloud will continue to become more relevant,” remarked Goel last June.  “No question.  However, that does not obviate the need for private infrastructure.  I think the rise of public cloud is making all of us better technology providers, because it’s forcing us as technology providers to take on challenges that we hadn’t historically taken on — like, making the consumption experience of our technology dramatically different, dramatically simpler.  Which is why Ric’s entire agenda is driven towards, how do we simplify?

“Tomorrow, it may be something else,” Goel continued.  “It may not be simplification, because that doesn’t have the value as maybe something else.  But it is certainly making us better technology vendors.”

Replacing Goel in Storage will be Bill Philbin, who came to HPE from NetApp in 2010.

For Lewis’ part, he had outlined what was, as of June, HPE’s expansion plan for its Helion Cloud Suite.  At the same time, he told reporters then, HPE would continue to produce and expand its existing OneView management software “to do more automation and orchestration.”

Cloud Suite, meanwhile, would be expanded to encompass cloud brokering, cloud-native development, “and all of those things you would see from those full-stack kinds of vendors,” said Lewis in June, “because, we believe, that some customers, based on what we’ve seen in ‘wave 1’ of convergence, they just want to buy the stuff, plop it down, and have it do one of three use cases.”

Those use cases were: virtual machine vending (a la Amazon); private cloud infrastructure-as-a-service with application vending; and what Lewis described as “multi-cloud, which is the true hybrid environment, in moving applications back and forth between public and private.

“There is a fourth, which is, give up on it all and run in public cloud,” Lewis continued.  “That’s not what we think’s going to happen, by and large, for everybody.”

But just last week, HPE’s corporate blog outlined what was described as a five-phase plan for “digital transformation,” which did not appear to involve buying stuff or plopping down.  So once again, HPE’s cloud strategy may be in mid-metamorphosis.