Can Open19 take hold given OCP’s wide support, including by Microsoft?

LinkedIn, the social network for the professional world that was in June acquired by Microsoft, has announced a new open design standard for data center servers and racks it hopes will gain wide industry adoption.

It’s unclear, however, how the initiative fits with the infrastructure strategy of its new parent company, which has gone all-in with Facebook’s Open Compute Project, an open source data center and hardware design initiative with its own open design standards for the same components. When it joined OCP two years ago Microsoft also adopted a data center strategy that would standardize hardware on its own OCP-inspired designs across its global operations.

Yuval Bachar, who leads LinkedIn’s infrastructure architecture and who unveiled the Open19 initiative in a blog post Tuesday, told us earlier this year that the company had decided against using OCP hardware when it was switching to a hyperscale approach to data center deployment because OCP hardware wasn’t designed for standard data centers and data center racks. That, however, was in March, before LinkedIn was gobbled up by the Redmond, Washington-based tech giant.

“Our plan is to build a standard that works in any EIA 19-inch rack in order to allow many more suppliers to produce servers that will interoperate and be interchangeable in any rack environment,” Bachar wrote in the blog post.

The standard OCP servers are 21 inches wide, and so are the standard OCP racks. Facebook switched to 21 inches in its data centers several years ago, and announced its 21-inch rack design, called Open Rack, in 2012. Multiple vendors, however, have designed OCP servers in the traditional 19-inch form factor and racks that accommodate them.

There is more to LinkedIn’s proposed Open19 standard than rack width, however. Here is the full list of Open19 specifications: 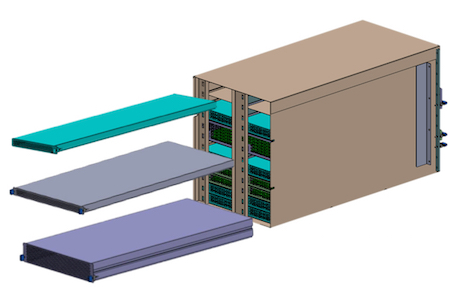 Bachar and his colleagues believe designs that follow these specs “will be more modular, efficient to install, and contain components that are easier to source than other custom open server solutions.”

Making open hardware easier to source is an important issue and probably the strongest argument for an alternative standard to OCP. We have heard from multiple people close to OCP that sourcing components for OCP gear is difficult, especially if you’re not a high-volume buyer like Facebook or Microsoft. OCP vendors today are focused predominantly on serving those hyperscale data center operators, which substantially limits access to that kind of hardware for smaller IT shops.

Still, the amount of industry support OCP has gained over the last several years will make it difficult for a competing standard to take hold, especially given that one of OCP’s biggest supporters is now LinkedIn’s parent company. Other OCP members include Apple, Google, AT&T, Deutsche Telekom, and Equinix, as well as numerous large financial institutions and the biggest hardware and data center infrastructure vendors.