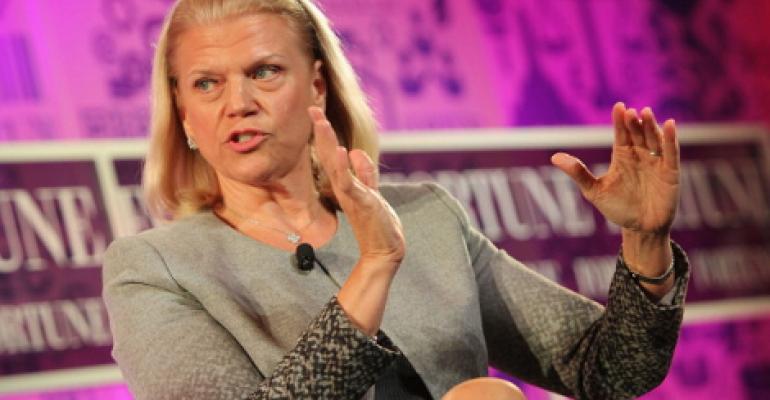 Chairwoman and CEO of IBM Ginni Rometty speaks onstage at the FORTUNE Most Powerful Women Summit in 2013 in Washington, DC. (Photo by Paul Morigi/Getty Images for FORTUNE)
Blades

IBM Investors Get First Sign of Turnaround at Big Blue

Now it has to prove it can continue to drive momentum

(Bloomberg) -- IBM gave investors a sign that Big Blue may finally be turning things around. Now it has to prove it can continue to drive momentum.

Revenue increased for the first time in a key unit -- cognitive solutions, including its Watson artificial intelligence platform -- that the company has been touting as crucial to future growth. The second-quarter results may signal that CEO Ginni Rometty is making good on her promise to shift IBM’s software and services offerings to match customers’ increasing appetite for cloud-based solutions. It’s been an uphill battle. Overall, sales have declined 17 quarters in a row while margins narrowed.

IBM's results Monday “underscore that the company is beginning to find an inflection point,” said Bill Kreher, an analyst with Edward Jones & Co. “We may begin to see the company grow as a whole as soon as next year.”

Second-quarter sales gained 3.5 percent to $4.7 billion in the cognitive solutions group, including analytics and security software products. This is the first time since Armonk, New York-based IBM reorganized its segments that cognitive solutions has registered a revenue increase, after declining the previous five quarters.

CFO Martin Schroeter highlighted Cognos and Watson products in the analytics portfolio as the major reasons for the increase. The sales growth in the cognitive solutions unit was also buoyed by deals, he said, pointing to the integration of the Weather Co. assets and Truven Health Analytics into Watson.

Shares were little changed at 10:50 a.m. Tuesday in New York, the first time in four quarters the stock didn’t tumble in reaction to an earnings report. IBM is up 16 percent this year through Monday.

To keep up the momentum, IBM will have to prove that it can meet expectations for its full-year earnings forecast of at least $13.50 a share. This means that more than 60 percent of its profit will have to come from the latter half of 2016, with most of the pressure on the last quarter.

It won’t be easy -- IBM’s gross profit margins have narrowed the last three quarters. Schroeter has said previously that the company’s investments and restructuring have compressed margins, along with the shift to the as-a-service software model. He said Monday evening that new businesses in software will become more profitable as they ramp up, an effect the company will start to see this half of the year.

Schroeter said third quarter earnings per share should be in the mi-to-high range of 22 percent to 24 percent of the full year, suggesting a forecast of $3.11 to $3.24. As a result, IBM would have to report EPS of $4.96 to $5.09 for the last three months to keep its word. Acquisitions will have a smaller impact on profit for the remainder of the year, Schroeter said. IBM expects that profit during the final period of the year will be supported by savings from workforce rebalancing and reduced real estate expenses.

To convince the skeptics, IBM also needs to prove it can break out of a pattern. For the last two years, the company missed its original full-year earnings projections, lowering forecasts both times in the third quarter.

IBM’s goal for the year is possibly achievable, but “unlikely” given the past two years, especially with projections of “relatively modest benefit from its restructuring and acquisitions,” Sanford C. Bernstein & Co. analyst Toni Sacconaghi wrote in a note. “Guidance points to Q4 needing to enjoy the highest sequential improvement in the last 9 years.”

In the first half of this year, IBM spent $5.4 billion on deals, closing 11 of them. Acquisitions added a two-percentage-point boost to revenue this quarter and is expected to add more to the top line during the second half of the year, Schroeter said on an earnings call late Monday. He didn’t specify how much acquisitions helped each group within the company.

IBM mixes the products from the acquisitions into software and services it sells to customers, which is why the purchases have helped multiple divisions of the company, Schroeter said in an interview.

“IBM has made some prudent investments, and now it appears they’re beginning to pay off,” Kreher said. “It certainly does ramp up expectations.”