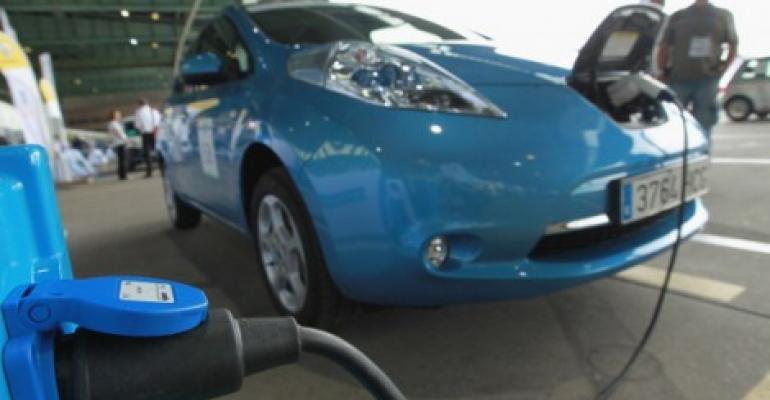 A Nissan Leaf electric car stands plugged in at a car show in Germany in 2011. (Photo by Sean Gallup/Getty Images)
Business

Powering the cloud with renewable energy is pretty much the best second life a used electric-car battery could ever dream of.

A data center French web hosting company Webaxys is building in Normandy will use an energy storage system based on used batteries from electric cars by Nissan Motor. The system, designed by Nissan and Eaton, will help the facility take advantage of renewable energy, whose intermittent availability requires energy storage for effective use.

The project, announced by Nissan, will be one of several recent deployments of battery technology developed by the electric-vehicle industry to provide energy storage for data centers. The batteries are generally designed to outlast the cars, and energy storage for facilities is a promising way to utilize them post-car.

By 2020, various automakers are expected to make about one million lithium-ion batteries a year available for the secondary market, Imre Gyuk, manager of the Energy Storage Research Program at the US Department of Energy’s Office of Electricity Delivery and Energy Reliability, told Data Center Knowledge in an earlier interview.

Researchers from the DOE’s Oak Ridge National Laboratory, General Motors, and the Swiss industrial equipment manufacturer ABB found that electric-car batteries generally retain up to 80 percent of their energy storage capacity after the end of their useful life in vehicles.

Last year, GM announced an experimental car-battery-based setup at its data center in Milford, Michigan. The data center is plugged into an energy storage system based on used Chevy Volt batteries, drawing energy from a solar array and two wind turbines. 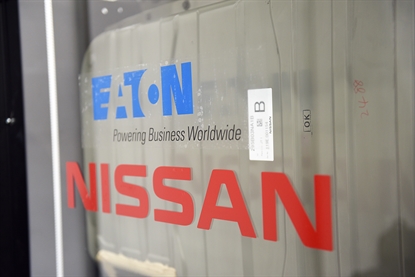 There’s also potential to apply battery technology developed originally for electric vehicles for energy storage in data centers and other facilities regardless of whether the batteries are used or new. In a pilot project in Oregon, an Amazon Web Services data center draws energy from a storage system the cloud giant designed together with the world’s electric-vehicle darling, Elon Musk’s Tesla Motors. Target, Enernoc, and Jackson Family Wines are running similar pilots with Tesla.

“We’ve been working closely with Tesla for the past year to drive innovative applications of high-capacity battery technology in data center applications with the ultimate goal of reducing the technical barriers limiting widespread adoption of renewables in the grid,” James Hamilton, architect at AWS and Amazon VP and distinguished engineer, said in a statement last year.

Once its Normandy data center comes online, Webaxys plans to open a number of other regional data centers that will also use Nissan and Eaton’s energy storage systems based on used electric-car batteries.