FASTER, the Google-backed submarine cable that adds much needed network bandwidth between data centers in the US and data centers in Japan, Taiwan, and the broader Asia-Pacific market, has been completed, about two years after the project was first announced. The cable will start carrying traffic on Thursday, a Google spokesperson said via email.

As more and more data is generated and transferred around the world, demand for connectivity is skyrocketing. There has been an increase in submarine cable construction activity in response, with major internet and cloud services companies like Google, who are the biggest consumers of bandwidth, playing a bigger and bigger role in this industry.

The FASTER system lands in Bandon, Oregon; two cities in Japan, Chikura and Shima; and in Taishui, Taiwan, according to TeleGeography’s submarine cable map. The cable landing stations are connected to nearby data centers, from where the traffic is carried to other locations in their respective regions.

On the US side, data center providers Telx (owned by Digital Realty Trust), CoreSite, and Equinix have made deals to support the new system. A Telx data center in Hillsboro, Oregon, is connected to the landing station in Bandon. FASTER traffic will be backhauled to Equinix data centers in Silicon Valley, Los Angeles, and Seattle. CoreSite’s big connectivity hub in Los Angeles will also have direct access to the system. 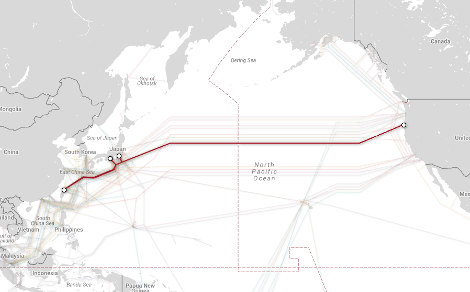 Google is a member of the consortium of companies that financed the submarine cable’s construction, which cost $300 million. The other members are China Mobile International, China Telecom Global, Malaysian telco Global Transit Communications, Japanese telco KDDI, and Singaporean telco Singtel.

Both KDDI and Singtel are also major data center services players. Singtel is the biggest data center provider in Singapore, one of Asia’s most important network interconnection hubs, and has a partnership with Aliyun, the cloud services arm of China’s internet giant Alibaba. KDDI subsidiary Telehouse operates data centers throughout Asia, as well as in Europe, US, and Africa.

Cloud will be responsible for the majority of all that traffic four years from now, according to Cisco, so it comes as no surprise that the cloud giants have ramped up investment in global network infrastructure.

Amazon Web Services, the biggest cloud provider, made its first major investment in a submarine cable project earlier this year. The Hawaiki Submarine Cable, expected to go live in June 2018, will increase bandwidth on the network route between the US, Australia, and New Zealand. Amazon agreed to become the cable’s fourth anchor customer, which finalized the financing necessary to build the system.

Microsoft and Facebook announced in May a partnership to finance construction of a transatlantic cable called MAREA, which will land in Virginia and Bilbao, Spain.

Microsoft is also an investor in the New Cross Pacific Cable System, a transpacific cable that will land in Oregon, China, South Korea, Taiwan, and Japan, and the transatlantic system called Express, which will land in Canada, the UK, and Ireland.

Corrected: A previous version of this article incorrectly stated that the FASTER cable went live on Tuesday evening, Pacific Time. The cable is expected to come online Thursday, and the article has been corrected accordingly. It also said incorrectly that Google had invested $300 million in the project. That figure is actually the total size of investment the entire consortium made.