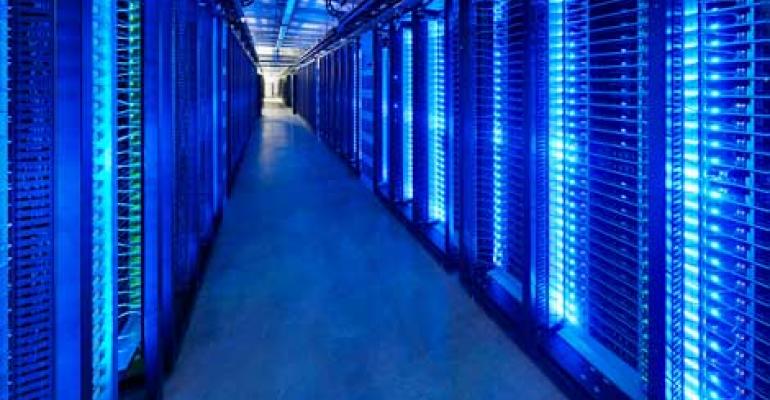 The interior of one of Facebook&#8217;s data centers in Prineville, Oregon.
Design

The flood of workers arriving to build two massive data centers in Prineville, Oregon, has created a housing shortage in the small rural town, filling hotel rooms and rental units, as well as some RV parking spots and campgrounds.

Apple and Facebook have huge data center campuses in Prineville, and both are constantly expanding. Last year, Facebook started construction of its third data center there, and Apple bought 200 acres of land for a second facility.

The city has surveyed its six hotels and found that about 17 percent of the 230 hotel rooms were booked long-term by workers building the two data centers, The Bulletin reported. The Central Oregon Rental Owners Association said the town’s rental vacancy rate was zero percent.

In an interview with The Bulletin, Prineville Planning Director Phil Stenbeck, who surveyed the hotels, said the housing situation was a direct impact of the two data centers' construction. “It’s the data centers — for those two projects currently happening, there are 500 construction workers here, and we’re anticipating another 100 electricians showing up in the next couple weeks,” he said.

Jeff Kerr, senior project manager for Rosendin Electric, which does a lot of electrical work on data center construction sites around the country, told the paper that the company currently has “300 or 400” electricians working in Prineville, many of them having a hard time finding places to stay.

The Bulletin spoke to a contractor who came to work on one of the data center construction sites in March. He initially stayed in a hotel room, but at some point went home for a weekend, finding upon return that all weekly-rate hotel rooms had been taken. Unwilling to pay high nightly rates for the rooms that were available, he decided to go to a campground outside of Prineville, where he now lives out of three tents.

City leaders have been thinking of ways to address the shortage, including changes to zoning rules to accommodate new housing options. Possibilities discussed so far included building temporary housing out of shipping containers and having private property owners – some of whom have expressed interest – host RVs on their properties.

Sponsored Content
Is Your Archaic Data Center Dragging Down the Bottom Line?
Feb 27, 2020