Survey: Half of IT Pros Have No Edge Data Center Plans

Many still confused about definition and value of edge data centers

The set of factors companies have to consider when devising their data center strategy has changed drastically. They have to take into account things like cloud services, mobile workforce, delivery of services at the network edge on top of the traditional requirements to maintain uptime and anticipate growth in capacity requirements. This April, we focus on what it means to own an enterprise data center strategy in this day and age.

Edge data centers have been a hot topic since about two years ago, fueled by the grand expansion ambitions data center providers that chose to go after the edge market had.

Companies like EdgeConneX, whose expansion ambitions were the grandest (it went from zero data centers to 20 in a period of two years), and vXchnge, which also expanded quickly, primarily by buying existing facilities (in one deal last May, for example, it acquired eight SunGard facilities), have gone after the demand for data center space outside of the top markets.

An edge data center, essentially, is a facility where long-haul network carriers interconnect with local ISPs and internet content providers who cache their data in the facility so that they don’t have to pay to transport it from the big cities. The effect is described as extending the internet’s edge, “edge” meaning the last stop from where content is delivered to the consumer.

While an interesting and relatively new topic, however, the amount of interest IT professionals have in actually using edge data centers turns out to be mild, according to a recent survey by Green House Data, a service provider with data centers in Oregon, Washington, Wyoming, New York, and New Jersey.

The company surveyed close to 500 IT pros, almost 40 percent of whom were “executive level,” and found that the interest that they do have in edge data centers is mostly for future deployments. Eighteen percent of respondents said they use an edge data center today, and 46 percent said they are planning to add one in within the next 12 months.

More than half of respondents said they have no plans to add an edge data center. 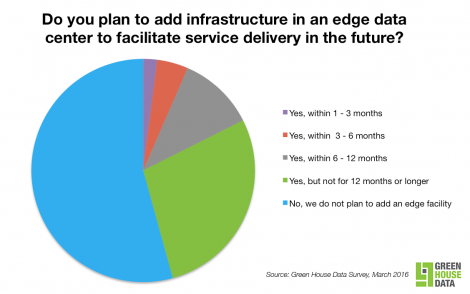 The survey also found that not everybody agrees on what an edge data center is. More than half said the most important features of an edge data center were high-reliability design and carrier neutrality, which are really the top requirements for any colocation facility.

Another 45 percent were closer to the mark, saying the top requirement were access to a wide variety of CDNs (Content Delivery Networks) and serving a major portion of bandwidth to the local population. 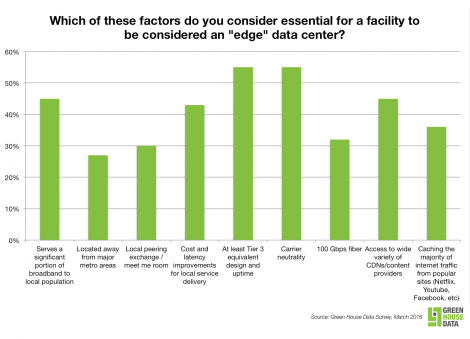 Interestingly, only about one-quarter of respondents said edge data centers had to be located away from major metro areas. It’s important to make the distinction between a top data center market and a major metropolitan area, since there are many metros that have one characteristic but not the other.

For example, EdgeConneX considers Phoenix an edge data center market, but the Phoenix-Mesa-Scottsdale metropolitan area ranks as 12th largest in the country, much bigger than San Jose-Sunnyvale-Santa Clara, which ranks as 35th largest in terms of population but which no-one would argue is a top data center market and a core location in the internet’s geography.

Edge data center companies do want to be in major metros that don’t already have key network interconnection and data center hubs, since their core value proposition is reducing the cost of delivering content to end users. 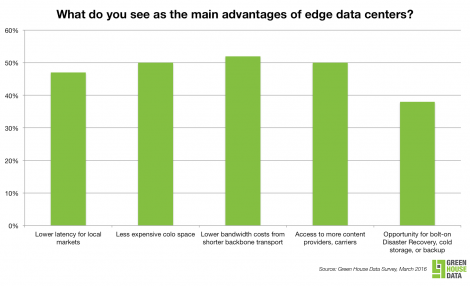