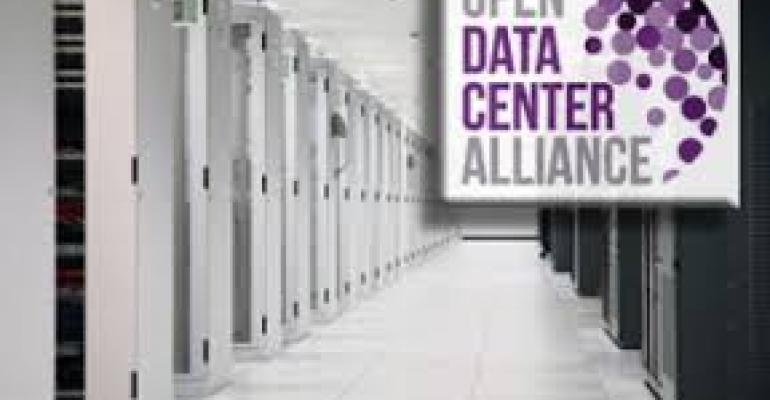 The basic principle is this simple: If you take the heat exhausts from a cluster of servers and point them toward a central cylinder, like a covey of quail, then run a chimney pipe from that axis, you create a convection. As hot air rises, cooler air rushes in to replace it. This principle is the central tenet of Vapor IO’s not-all-that-radical data center cooling architecture, which it claims could drive PUE ratios down by close to 10 percent, from an average of about 1.7 to 1.6.

For this principle to be enacted in the world’s data centers today, both old and new, most everything about their architecture, layout, and construction has to be reconsidered. On Wednesday, Vapor IO took a critical step toward making such a reconsideration actually happen on a grander scale, with the official announcement of its having joined the Open Data Center Alliance.

“As we are all aware, data centers are extremely complex, and both capitally and operationally expensive,” stated Vapor IO CEO Cole Crawford, in a note to Datacenter Knowledge. “ODCA represents a powerful organization that, I think, compliments other community-based organizations dedicated to commoditizing an overly complex and often disjointed environment.”

The original purpose of the ODCA, as we reported in 2011, was to concentrate the buying power of multiple organizations, toward infrastructure components that best suit a broader range of customers. Commoditization is one very effective approach to making these components both more affordable and less proprietary, as has been proven by Facebook’s efforts with the Open Compute Project. Cole Crawford was the founding executive director of that project’s foundation.

At an industry conference last September, Crawford demonstrated a simulation of the airflow of two data centers, one employing his company’s vapor chambers, and the other using the standard hot aisle/cold aisle layout. In explaining its physics (in a manner Richard Feynman would have appreciated), Crawford asked attendees to imagine having to evacuate the water out of a bottle by blowing into a straw. “I don’t care how strong your lungs are,” he said, “it wouldn’t happen.

“In thermodynamics, air moves exactly the same way as water,” he continued. The formal name for this motion is the Venturi effect — the principle that, when a fluid or gas moves through a constricted pipe, its velocity rises and its static pressure proportionately declines. More fluid or gas rushes in from behind to fill the vacuum.

“Thermal dynamics shows us that hot air likes to rise, and that pulling air as opposed to pushing air is far more efficient,” the CEO told us Wednesday. “By eliminating head pressure, we can move more air at less cost, while increasing rack density and the delta-T (the difference between hot aisle and cold aisle temperatures) — which equates to massive OpEx savings.”

In Vapor IO’s design, heated air is helped along upward by way of a fan. Now, if layout were the only element of vapor chamber design, you might think that it wouldn’t be that big of a deal to release it to open source. But there’s another critical element that makes the company’s enrollment in ODCA make a lot more sense: the monitoring and automation interface.

Last month, Vapor IO released version 1.2 of its Open Data Center Runtime Environment (OpenDCRE). Borrowing a phrase from the realm of SDN, the company describes OpenDCRE as including a “southbound interface.” This is comprised of a RESTful API which gives resource monitoring and workload orchestration tools real-time access to the current statistics for every device in the rack. As Crawford confirmed for us, Vapor IO racks would follow the Open Rack standard.

“OpenDCRE is available for anyone to leverage as a 21st century, open source alternative to the gratuitous differentiation offered by existing data center management products for rack-scale control and automation,” Crawford told Datacenter Knowledge, with a bit of trademark bravado. “We've seen both adoption and innovation for what people intend to do with OpenDCRE, and based on what we're hearing, it will be disruptive on many levels of the data center.”

One of those orchestrators to which OpenDCRE will be connected is Mesosphere’s DCOS — the groundbreaking, container-based, multi-server workload orchestration platform which has attracted the earnest attention of the communications industry.

“I am really excited about the work that they (Vapor IO) are doing,” said Mesosphere CMO Matt Trifiro, in an e-mail to Datacenter Knowledge, “building self-contained and highly-efficient data center ‘modules’ that start to move us toward our vision of the entire data center behaving as one giant computer.”

Trifiro pointed us toward an “unprecedented” future where very granular workloads — conceivably, individual microservices — could be orchestrated and scheduled for deployment on specific servers based, in part, upon their up-to-the-minute physical conditions.

“One of the most interesting aspects of Vapor IO’s work,” said Trifiro, “is they are building hardware and software interfaces that provide new sources of telemetry, from the hardware that highly-automated systems like Mesosphere DCOS will use to make real-time scheduling decisions that optimize for business outcomes. For example, DCOS can ingest real time temperature and power information from the cluster, and use that data to make scheduling decisions that optimize for cooling or power constraints.”

“Data centers today not only have a gargantuan amount of data to collect,” said Vapor IO’s Crawford, “but that data is, at best, delivered near-time and through proprietary interfaces. Additionally, data center operators and staff have to ensure uptime, but when the pager goes off at 2 in the morning, it’s fair to say we’re likely not operating at 100 percent. The role of the sysadmin has matured into a more proactive DevOps role. OpenDCRE makes this maturation possible for data center operators as well.