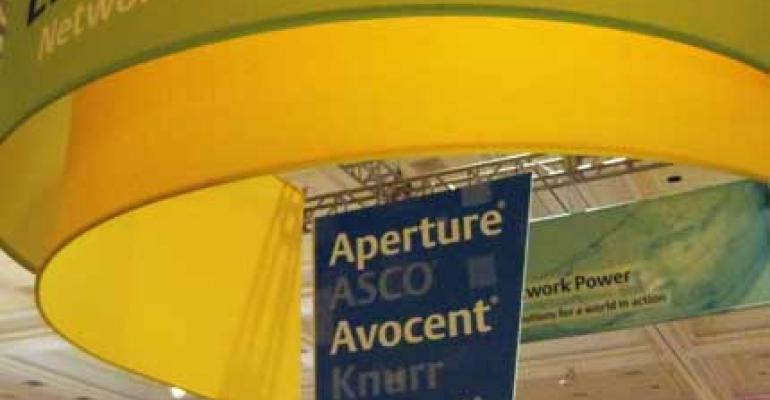 Emerson took the next step in spinning off its Network Power Unit--named Vertiz--by filing paperwork with the SEC on Tuesday.

It's official: Emerson filed papers with the SEC today announcing its intent to spin off its Network Power business after the unit suffered a 28 percent slump in sales from 2011-2014, according to a Bloomberg article.

The slowdown can be attributed to more and more companies turning to third-party data center services instead of buying their own servers and related networking equipment. For years it was a lucrative arena for Emerson and hardware heavyweights like Hewlett-Packard and Schneider Electric.

Shedding the unit, valued around $4 billion according to analysts, will allow Emerson to focus on its more lucrative businesses mostly focused on equipment for controlling industrial processes and components for heating and air-conditioning systems.

Newly named Vertiv, the unit is expected to operate as a separate public company after 100 percent of outstanding common stock is distributed tax-free to Emerson shareholders, according to a press release. There is talk on the street, however, that Siemens AG has shown interest in acquiring the network power business as well as some private equity firms, according to a Reuters' article.

Regardless of whether that acquisition pans out, Emerson Network Power's Business Leader Scott Barbour is very optimistic about the spin off, which should be completed in September 2016, according to a press release.

“Our years as part of Emerson have given us a tremendous foundation from which to launch and grow Vertiv as an independent company. Our team is looking forward to the opportunity to concentrate on our core competencies, expand our global customer base, strengthen our industry leading positions, and create value for our future shareholders.”

Emerson CEO David N. Farr concurs: “Today marks another step forward in a process we began in early 2015 focused on strengthening Emerson and preparing the Company to capitalize on future growth opportunities. The spinoff of Vertiv will sharpen Emerson’s focus on high-growth markets and establish Vertiv as an industry-leading public company under Scott Barbour’s strong leadership.”

Vertiv offers a broad range of products in both power and thermal management and provides lifecycle management services and solutions for deploying, maintaining and optimizing these products. It also provides infrastructure management, monitoring, controls and software solutions for its customers’ critical applications.