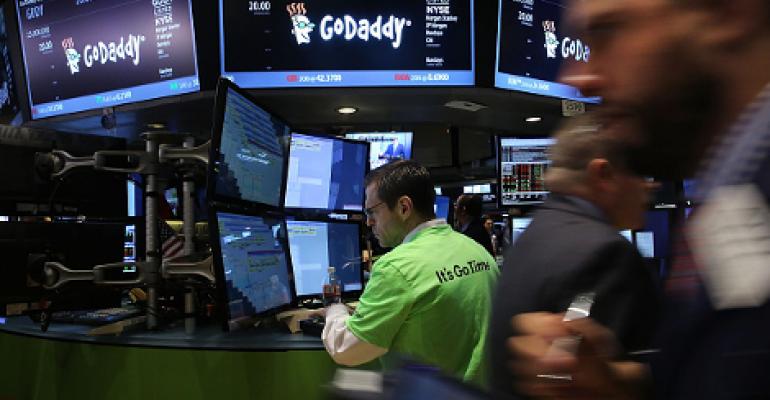 NEW YORK, NY &#8211; APRIL 01: Traders work on the floor of the New York Stock Exchange as the website hosting service GoDaddy makes its initial public offering (IPO) on April 1, 2015 in New York City. GoDaddy, which manages about a fifth of the world&#8217;s Internet domains will list on the New York Stock Exchange under the ticker &#8216;GDDY&#8217; and priced its IPO at $20 Tuesday night. (Photo by Spencer Platt/Getty Images)
Shared

New cloud services based on OpenStack

Web host and domain name provider GoDaddy expanded its hosting services to offer its Cloud Servers product and Bitnami-powered cloud applications which are available on a pay-as-you-go pricing model and hosting from four world-wide data centers.

Cloud Servers were based around the needs of a freelance developer or small web agency creating websites and applications for a small to medium-sized businesses, According Jeff King, GoDaddy’s SVP and GM of hosting and security. It features control over virtual instances using a simple API (and access to multiple, public-facing APIs) as well as a user interface. Virtual instances can be provisioned in 54-seconds or less, and VM snapshots let developers reuse their configurations on new instances rather than start from scratch.

Cloud Servers are also integrated with GoDaddy products such as Domains and DNS, which allows customers to manage and maintain new and existing domains and subdomains.

Providing a Suite of Easy-to-Deploy Applications to Developers

GoDaddy’s Cloud Applications are based on Bitnami, a library of open source application deployments, that provides one-click optimized installations of 130 applications ranging from content management systems like WordPress and Drupal, to customer relationship management tools like Odoo and OpenERP, to even more complicated applications.

Dennis said that many developers might start with CMS and CRM tools, then take things to “the next level” with some complex solutions.

“Maybe their customer does want to do something with a mobile app or maybe they do want to have a better marketing automation engine than what you get with a basic CRM – so, they’re all in there and they’re all equally available and all easy enough to deploy and they really provide a giant toolkit for the developer to decide how they want to differentiate themselves versus the other offerings on the market.”

Cloud Applications are also appealing to development shops that want to build their service offerings from simple websites to things like e-commerce and marketing automation. “They can focus their efforts on the clients’ needs and building the code, not on the guts of the infrastructure.”

King said, “It is pay-as-you-go but we offer certain packaged capabilities starting at $5 per month.” He said a typical website would cost less than $20 per month, and it’s easy to scale up from there with more complex capabilities and services. The company is also providing a 30-day trial to let developers give it a try.

Directing the Product at SMB Developers

King said that it would be wrong to interpret Cloud Servers as a direct rival to the cloud providers like Amazon, Google, Microsoft and Rackspace, who are competing for enterprise developers. “They’re trying to get people who are spinning up dozens or hundreds of servers. They’re focused on providing very high-end, complex services – global load balancing services adn things like that that small business customer and most web developers have no need for.”

He noted that these platforms are “overkill” in terms of pricing and complexity for for most web developers and SMB customers. “What we’re providing is something much simpler, much easier to use,” also noting that they can also get DNS, domain names, security and IP addresses all with the same provider and using the same API and UI. “We think that’s going to be super compelling for this class of web developer,” King said.

Cloud Servers is being delivered from data centers in Phoenix, Virginia, The Netherlands and Singapore.

GoDaddy originally introduced Cloud Servers in beta in April 2015, and was in limited availability since October 2015. It’s now available in 26 languages in 44 countries and territories.

With its business largely focusing on small businesses in the west for a long time, GoDaddy has made a decided appeal to a more global audience with its entry into 11 new Asian markets earlier this year. It still doesn’t have a data center in the region’s largest market, China, despite its Chinese customers being able to buy .cn and .com domains, and other services.

“Hosting in China is a complex thing – the environment there for companies outside China it’s complicated an difficult to get there,” King said. “For now, we’re hosting our Asian data centers in Signapore and that serves the Asian market very effectively… but it will be some time until we have a Chinese data center.”

This first ran at http://www.thewhir.com/web-hosting-news/godaddy-launches-cloud-servers-and-bitnami-powered-cloud-apps-worldwide