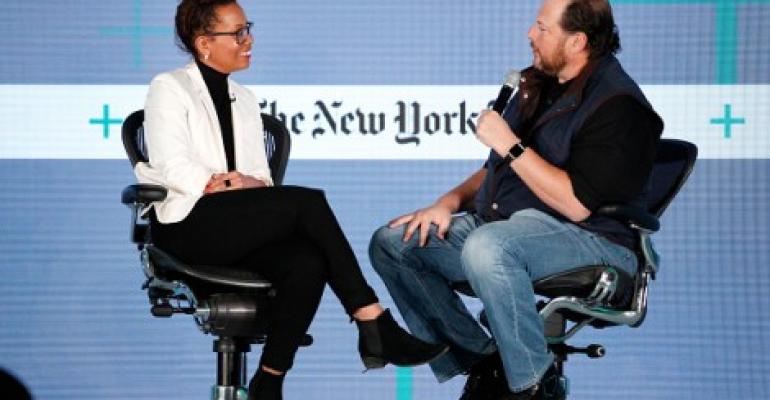 Jenna Wortham, The New York Times Magazine Staff Writer (L) and Marc Benioff, Chairman and CEO of Salesforce, speak onstage at The New York Times New Work Summit on March 1, 2016, in Half Moon Bay, California. Salesforce recently conducted a study of all 16,000 salaries its own employees get and found that many of its female employees were getting paid less than their male counterparts. (Photo by Kimberly White/Getty Images for New York Times)
Business

Women in a variety of roles related to data centers make more money than men in similar roles, a recent survey of 310 data center professionals by the hyperconverged infrastructure startup Stratoscale found.

There aren’t many women with data center jobs, comparatively speaking; only about 12 percent of respondents were women. But the results showed that female data center professionals earned “17 percent more on average than their male counterparts,” the company said.

Women in many Silicon Valley companies earn less than men, and this gender pay gap has been documented recently. Far from all companies make their salary data publicly available, but Salesforce, for example, found in a review of 16,000 employee salaries that many women who worked for the cloud software company were paid less than their male counterparts.

There are efforts on the way to push some of the biggest US tech companies to disclose this kind of data. One investment management firm, Arjuna Capital, is pressing to get shareholders of those companies to vote on whether or not the companies should make the data public. Those companies are eBay, Expedia, Facebook, Google, Adobe, Microsoft, and Amazon.

Shareholders for the first four on the list will vote on the issue. Arjuna is working on getting it in front of Adobe and Microsoft shareholders, while Amazon is fighting the proposal at the SEC level, arguing that “gender gap” is too difficult to define narrowly enough.

The data center industry, of course, stretches far beyond Silicon Valley, and according to the Stratoscale survey, there is a reverse gender pay gap in data center jobs:

While the Stratoscale survey’s sample size was quite small, the researchers did attempt to make it as comprehensive as possible, reaching out to people with data center jobs around the world across many different industries, company sizes, age groups, seniority levels, and areas of expertise.

About 30 percent of respondents were in hardware and software industries, and about 64 percent of them were in North America. About a quarter worked for companies with more than 10,000 employees and between $10 million and $100 million in revenue.

Overall, highest-paid data center jobs were in media and entertainment, e-commerce and internet, construction and engineering, health and pharmaceuticals, and manufacturing. The lowest salaries were reported by data center professionals in government, travel and hospitality, education, and logistics and transportation.

You can look at the full report here after filling out a contact form.