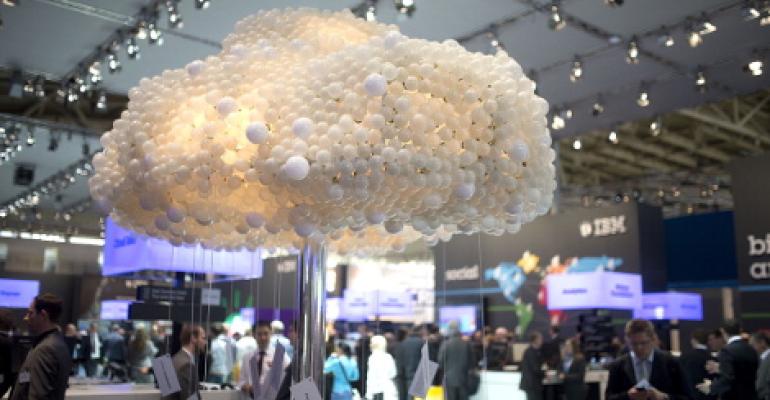 A symbolic data cloud is seen at the IBM stand at the 2014 CeBIT technology Trade fair on March 10, 2014 in Hanover, Germany. CeBIT is the world&#8217;s largest technology fair and the year&#8217;s partner nation was Great Britain. (Photo by Nigel Treblin/Getty Images)
Data Center World

Emerging Trends Shaping the Data Center of the Future

Five billion people today don't have access to the internet, but they will, and that alone is a big reason the data center of today must change

“Show me an IT professional who can predict the exact timing, size, method, and location for their next data center and I will show you someone with a defective crystal ball. That’s the nature of this industry.”

As has been a theme throughout the conference, the VP of marketing development and energy initiatives for Emerson Network Power, set the tone for his presentation by focusing on data and its potential for turning the IT world upside down.

“Five billion people that woke up today do not have daily access to the Internet,” he said, suggesting that the amount of data generated by that many more users, on top of what already flows over our crowded networks, is reason alone that the data center of today must change.

Here are other key emerging trends Pouchet talked about that will have substantial impact on how we build and design future data centers.

The Cloud of Many Drops

More and more companies are looking beyond virtualization and to the cloud to address underutilization of computing resources, and for good reason. A 2015 study by Stanford’s Jonathan Koomey, found that enterprise data center servers still only deliver, on average, between 5 and 15 percent of their maximum computing output over the course of a year. A surprising 30 percent of physical servers had been comatose for six months or more. Enter the shared services cloud arena. The fact that companies can now offload space-consuming applications and non-critical workloads to shared space means fewer data center builds and a little breathing room. “That allows for more intelligent decisions on the core building they already have,” said Pouchet.

It’s hard not to put security first when it comes to data center design. The total cost of privacy-related data security breach stands at $3.8 million, and the number of security-related downtime incidents rose from two percent in 2010 to 22 percent in 2015, according to the Ponemon Institute. This affects the way enterprises approach resiliency, availability, storage, you name it. Will data reside on the cloud or on-site? Are you capable of bringing up systems fast enough to avoid serious downtime and loss to data and oftentimes reputation? Those are questions that every existing and builder of new data centers must consider.

Beyond PUE and Green

Data centers have certainly made plenty of headlines with respect to being energy hogs, thus the push toward great efficiency, new cooling techniques and the acronym PUE. Today, they’re being singled out as abusers of what is rapidly becoming a rare commodity: water. In fact, when Pouchet talked about the 5 billion people without Internet access, he added that 1 billion of those do not have access to potable water. So, it doesn’t bode well that, according to Pouchet, also a Green Grid board member, that a modest 1 MW facility can easily consume more than 4.4 million liters (1.2 million gallons) annually.

This focus on water has spawned a new acronym: WUE (Water Usage Efficiency) and new thinking about ways to cool the dater center. That’s the typical way of increasing efficiency: by cooling the data center. However, Pouchet pointed to a new approach that actually removes heat at the rack or aisle. Other new considerations include evaporative cooling technologies and economizers that utilize outdoor air. This has become yet another key factor set to impact the future data center.

Because the fabric of the Internet is changing so rapidly, we’re seeing more and more data centers decentralizing and being supported by micro data centers. In other words, data, and its processing component, are moving as close to user groups as possible in terms of edge and (small but growing) micro data centers. For example, just as content delivery networks cached data closer to customers, there will be more satellite data centers providing cloud-based content closer to the network's edge. As a result, the importance of tier two and three cities grows more important as traffic moves away from tier one cities such as London, New York, Chicago and San Francisco, to the next set of markets closer to the edge and to users.

Data centers are in a constant state of flux, and the above emerging trends will definitely shape how they look, feel and perform in the future. It’s important that you keep all of them in mind—and their possible ramifications—as you make decisions when building or redesigning existing data centers.