CoreSite signed more rents in 2015 than it has in any previous year and generated the highest investor returns in its sector, but the company is close to maxing out its existing building capacity in several key markets.

On the 2015 earnings call with analysts, CEO Tom Ray avoided addressing this concern in detail, saying only that the team was aware of it and “thinking accordingly.”

The company saw record leasing in 2015, signing more than 500 leases totaling about 400,000 square feet of data center space, senior VP of sales and marketing Steve Smith said. Those leases add close to $50 million in rent revenue – a 40 percent increase over 2014 and the highest level of rent signed in company history.

During Q4, CoreSite played leasing "small-ball," as Smith pointed out. Most of the 155 new and expansion leases signed in the quarter were for requirements of less than 1,000 square feet -- a 36 percent increase over the previous four-quarter average.

The CoreSite mid-to-high-teen ROIC is derived in no small part from building out existing powered shell space. An analyst pointed out on the call that CoreSite was now building out the final phases, and capacity will be maxed out in both Chicago and Northern Virginia markets.

Ray confirmed that there has been a noticeable increase in interconnections between enterprise customers and cloud providers. Additionally, CoreSite saw growth of these interconnections increasing at a faster rate in 2015, compared with the rate of increase reported in 2014. 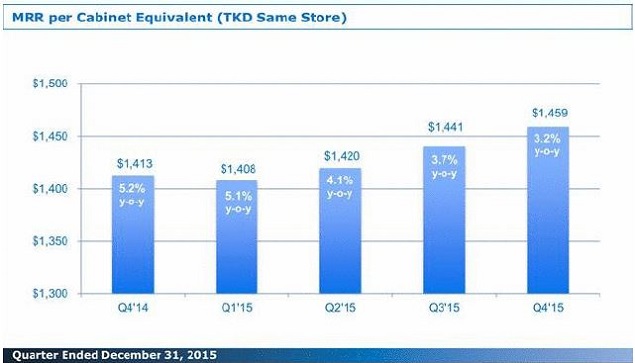 Something Investors Should Consider

When it comes to allocating capital to drive strong near-term results, the correct answer will almost always be to build out existing properties. CoreSite will continue to deliver great numbers leasing to sub-1,000-square foot tenants in existing powered shell space. However, they are currently developing the final phases in two of the strongest Tier I data center markets.

Notably, the highest returns are usually associated with the final phases of any data center development -- especially when compared with the costs associated with delivering the first phase of a new project. The question investors should be asking is: What happens when most of the low-hanging fruit has been harvested?

While this is a challenge facing the company moving forward, it comes as no surprise that the CoreSite management team refused to spill any candy, or tip their hand on the call.

Best Markets: The strongest leasing markets in Q4 for CoreSite were Los Angeles, the Bay Area, Chicago, and Northern Virginia. Together, these four markets accounted for 80 percent of new and expansion leases signed in Q4 and 95 percent of annual GAAP rent for the quarter.

Development: In the fourth quarter, CoreSite had a total of 370,000 square feet of capacity under construction consisting of both turnkey data center and powered shell space. This included projects underway in Santa Clara, Northern Virginia, Boston, and Los Angeles.

Deferred Expansion Capital: CoreSite now reports CapEx required to fully build out the space in accordance with its plans to add full capacity to its data centers as a separate line item. Notably, the total budgeted amount of $30 to $40 million may not actually be spent.

CoreSite scored points with investors when it came to the REIT metrics that really matter. The data center REIT reported year-over-year Funds from Operations growth of 31 percent and grew the annual dividend by 26 percent.

Denver-based CoreSite has now closed out the books on a "winning season" for 2015, both for the company and for the Denver Broncos, the Super Bowl 50 champion.

The focus now should be on acquiring what these teams need to succeed next season.