Switch Data Center in Michigan to Run on Renewable Energy

Switch has agreed to buy renewable energy for its future data center in Michigan.

The Las Vegas data center provider, known for its massive high-security campus in the Sin City, will start by procuring bundled energy and Renewable Energy Credits through the Green Generation program by Consumers Energy, the utility that serves the area in Michigan where the Switch data center will be built, Adam Kramer, the company’s executive VP of strategy, said. However, it is in negotiations with the utility about building a new utility-scale renewable generation project in the state.

“We will have a new generation resource in the market,” Kramer said. “In all likelihood it will be wind.”

The future renewable project will have enough capacity to offset the entire energy footprint of the future Switch data center, he said.

Power for Consumers Energy’s Green Generation program is generated by a mix of wind and landfill gas. Whether energy that comes from reclaimed methane in gases generated by landfill can be considered renewable is controversial, and Switch will not be buying energy generated that way, according to Kramer.

“We’re not going to be using landfill gas,” he said, and once the new renewable project is built, the facility will be using its energy output exclusively.

Fate of the Switch data center project in Michigan was in question until late last year. The company had plans to convert the pyramid-shaped former office building outside of Grand Rapids, but said it would execute those plans only after the state changed its tax code, adding new tax breaks for data center users and operators. A bill to create the tax breaks was rushed through the legislative process under deadline pressure from Switch, which said it wouldn’t pursue the Michigan data center project unless the tax breaks were secured before the end of the year. 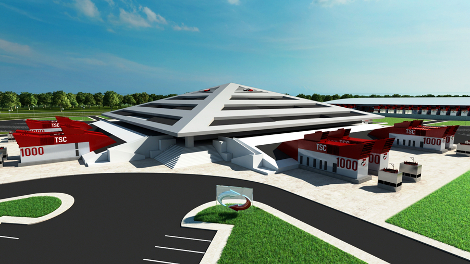 In mid-December, after the bill was passed by both houses of the legislature, the company’s CEO Rob Roy told us the Switch data center project in Michigan was a go.

Switch, which is currently also building data centers in Italy and Thailand, has been actively focused on renewable energy for its data centers since last year. The company made a public commitment to power all of its data centers with 100-percent renewable energy, joined President Barack Obama’s American Business Act on Climate Pledge, and more recently became a signatory of Corporate Renewable Energy Buyers’ Principles.

The Buyers’ Principles were developed by a group of corporations together with the World Resources Institute and World Wildlife Fund to make it easier for companies that consume a lot of energy to procure renewable energy, which remains a big challenge in many American states.

The bulk of the signatories are major tech companies that operate many megawatts of data center capacity in the US and globally, including Salesforce, Intel, eBay, cisco, Google, Amazon, Facebook, Yahoo, Microsoft, and HP. There are also some data center service providers on the list – Switch’s competitors IO, Digital Realty Trust, and Equinix.

Switch has signed two utility-scale Power Purchase Agreements for energy that will be generated by two massive solar farms in Nevada. The contracts, 180MW total, will offset energy consumption of the entire huge Switch data center campus in Las Vegas and the future one the company is building near Reno, Nevada.