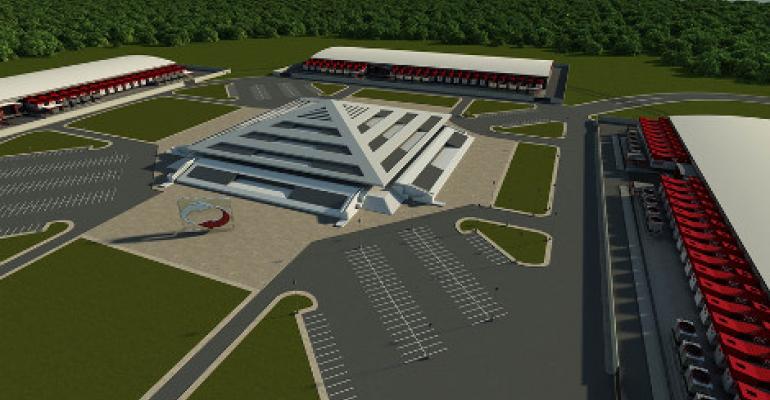 Switch&#8217;s plans in Michigan include turning the basement of the Steelcase pyramid into a data center, and building additional facilities around the Pyramid (Rendering courtesy of Switch)
Business

Switch, the Las Vegas-based company that builds mega-scale data centers, is pushing officials in the State of Michigan to quickly pass a series of data center tax incentives, so it can proceed with plans to build a data center campus that will include a pyramid-shaped building that used to house offices of the large office furniture supplier Steelcase.

At full build-out, which may take up to 10 years, Switch’s plans call for two million square feet of building space across multiple data center buildings around the Steelcase pyramid. “It could be as many as six buildings,” company spokesman Adam Kramer said.

The pyramid’s basement would be turned into a data center, and additional buildings would be constructed around it.

Tax Breaks or No Deal

But Switch says it is not going to go forward with the plan, unless the legislature passes three bills that would ensure the company would receive tax breaks. Kramer declined to share what other locations Switch was considering for the project.

State lawmakers have a deadline if they want the company’s investment. Switch wants the incentives to be approved by the end of the year.

In addition to uncertainty about the future of Michigan’s data center tax break legislation, a lawsuit connected to the sale of the Steelhead property to Norman puts Switch’s plans in further jeopardy.

Following Switch’s announcement, a group called Education Campus Investors filed a lawsuit against Steelhead, the property’s former owner, for reneging on an agreement to sell the property to ECI for $3 million the two entities reportedly made last May, according to a report by M Live.

In the lawsuit, ECI asked that the court order Steelcase to honor the agreement and sell the property to the group. Companies have not disclosed how much Norman paid for the property.

Kramer said Norman’s decision to buy it was not driven by Switch’s plans.

Stepping Out of Las Vegas

After many years of building out its campus in Las Vegas, the data center provider started expanding into other territories this year.

It announced plans to build a campus in Reno, Nevada, its first project outside of Vegas, in January. Last month, the company said it had broken ground on a 450,000-square-foot data center build in Siziano, Italy, just outside of Milan.

Norman Properties, the same developer that recently bought the Steelcase property in Michigan also owns the Tahoe Reno Industrial Center in Nevada, where Switch is building its new campus. eBay will be Switch’s anchor tenant in Reno.

The company has had success attracting high-profile customers, including Google, Amazon, Boeing, Intel, Dreamworks, HP, Intuit, and JP Morgan Chase, among others. Its customer roster has about 1,000 brands.

The reason Switch wants to build a data center in the Michigan location is its ability to serve major East Coast and Midwest markets without the risk of natural disasters in coastal areas and high prices of power and real estate. It picked Reno to serve West Coast markets for the same reasons.