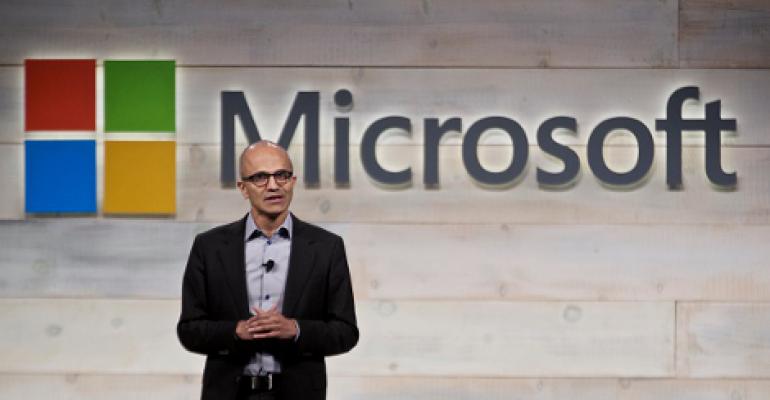 Microsoft CEO Satya Nadella addresses shareholders during Microsoft Shareholders Meeting in December 2014 in Bellevue, Washington. The meeting was the first for Nadella as CEO. (Photo by Stephen Brashear/Getty Images)
Shared

What Microsoft Announced at its Big Azure Cloud Event

This is important for Indian customers who are able to meet data residency requirements (given that data stays in India) and it also allows data replication across multiple regions for increased availability and backup redundancy.

Including these new regions, there are now 24 Azure regions worldwide.

Office 365 in India is slated for October, and Dynamics CRM Online for the first half of 2016.

Microsoft announced a new Azure Container Service that will combine the openness ofApache Mesos and Docker with the hyper-scale of Azure for container orchestration and management.

This lets organizations using Azure easily deploy and configure Mesos to cluster and schedule Dockerized applications across multiple virtual hosts. The service will be available for preview by the end of the year, and will support Windows Servercontainers in the future.

“With large-scale production users like Airbnb, Twitter and Apple, Apache Mesos is the most scalable and flexible container orchestration platform available on the market today,” said Florian Leibert, co-founder and CEO, Mesosphere. “At the same time, Microsoft continues its rapid growth and enterprise cloud leadership, with more than 80 percent of the Fortune 500 using Microsoft’s cloud to power their businesses. The partnership between Mesosphere and Microsoft will give customers unmatched choice and flexibility in managing their container investments, delivering a first-class implementation and enterprise support experience on Azure.”

The Azure IoT Suite, which helps share data across connected assets, devices and systems, is now available for customers to purchase. It integrates with a company’s existing processes, devices and systems to quickly and easily build and scale IoT projects using preconfigured solutions.

Microsoft also announced the new Microsoft Azure Certified for IoT program, an ecosystem of partners whose offerings have been tested and certified so businesses can take their next IoT project from testing to production, more quickly. Current partners include BeagleBone, Freescale Intel Corporation, Raspberry Pi, Resin.io, Seeed Technology Inc., and Texas Instruments Inc.

Additionally, Microsoft announced Monday it had expanded Azure Data Lake, the service it originally launched in April that provides a Apache Hadoop cluster service that collects all data in a single place prior to any formal definition of requirements or schema. Microsoft calls it a “hyper-scale repository”.

Like Hive, U-SQL is a SQL-based language, but U-SQL aims to make big data processing easier. Notably, it makes it easier to support non-structured data and files by not requiring file data or remote sources to be cataloged and schematized before querying them.

One of the roadblocks to cloud adoption has been concerns over security, especiallyamong organizations outside the US.

To hopefully ease some of these worries, Microsoft’s new Azure Security Center is designed to give customers visibility and control of their Azure resources with integrated security, monitoring and policy management. Microsoft is able to analyze information gathered from customer deployments and compare it with global threat intelligence to detect threats and provide security recommendations for clients.

Azure Security Center will be broadly available for Azure customers by the end of the year.

Available globally starting Dec. 1, Azure Compute Pre-Purchase Plan allows customers to pay for their Azure compute capacity for an entire one year at a discount of up to 63 percent. This makes sense for customers with steady state, predictable workloads on Azure.

This first ran at http://www.thewhir.com/web-hosting-news/orange-business-services-integrates-with-google-cloud-interconnect